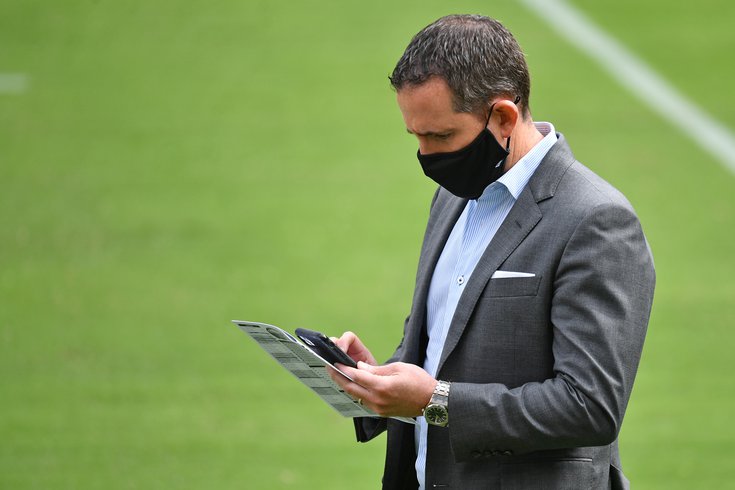 In our Eagles chat on Tuesday, there were a lot of questions that we could not get to in time or other questions we did answer but could use more color. And so, let's do a mailbag post to answer some of the overflow, as well as some commonly asked questions on Twitter and via email as the Birds head into their Week 7 matchup against the Giants as favorites for the first time in a few weeks, according to TheLines.com.

Question from Urkelgrew: Did you see the report that the Eagles will be sellers at the trade deadline?

Well, I wouldn't call it a "report," necessarily. It was really just a radio hit on 97.5 with Adam Schefter.

"I believe the [Eagles] will be more 'sellers' than 'buyers' at the deadline."

So on the one hand you have Jason La Canfora saying the Eagles will be buyers. On the other hand, you have Schefter saying they could be sellers. So... ¯\_(ツ)_/¯

I'm on record as saying they should be sellers.

Question from Ross: Is J.J. Arcega-Whiteside not getting any separation or does Wentz never look his way? It's hard to make plays if the ball never comes your way, and it appears Wentz, despite losing all his other receivers the past two years, never looks at J.J. He also tends to zero in on one or two receivers. Is it possible Wentz's distaste for looking at J.J. is contributing to our negative view of him, or is he so bad and untrustworthy that Wentz is right to ignore him?

I haven't gone through and found all of Arcega-Whiteside's routes run, and tried to determine how much separation he is getting on throws not coming his way, because, well, I don't want to, ha.

I did, however, look at the Eagles' receivers' number of routes run verses their number of targets to see who Wentz -- or maybe just as importantly, the offensive coaching staff -- is favoring. Here are the Eagles' players with at least 35 routes run:

To begin, Arcega-Whiteside isn't playing much. He has only run 46 routes so far this season, or 9.2 per game in the five games he has played. But also, your perception is indeed correct that he is not seeing many targets even when he's in there, as he has the lowest percentage of targets per routes run on the team.

The staff isn't calling plays for him, and Wentz isn't going to to him when he needs someone to make a play. This season alone, on Arcega-Whiteside's four targets, here's what happened, in chronological order:

In other words, bad things happen when they throw his way.

On a side note, Zach Ertz's percentage of routes run resulting in a target... 👀

I'd like to see this become a stat that the NFL tracks, like points off of turnovers. As far as the Eagles go this season, they have allowed 34 points after scoring touchdowns this season (I didn't look at field goals).

I should note that against the Niners, the Eagles got their pick-six after a touchdown, so you could in theory give a -7 for that, which I didn't do.

Anyway, that's 1.9 points per drive. On the season, the Eagles are allowing 2.4 points per drive, so it's less after touchdowns, though as you can see above, it's been more of a problem the last three weeks.

Question from SpongeWorthy: Looking at Ezekiel Elliott and his decline, would you be on board with trading Sanders before he wants a big contract?

Zeke is only in his fifth year, and he already has 1491 touches, after heavy usage his last two seasons at Ohio State. Sanders only has 312 total touches as a pro after light usage at Penn State. So I don't think Zeke vs. Sanders is a particularly useful comparison, in that Sanders isn't going to approach 1500 touches for a long time.

If I were the Eagles, however, I would be concerned with the number of injuries that Sanders has accumulated, and his availability will certainly factor in to any second contract negotiations if/when it's time for those.

Question from Norm Snead: Based on what you think Zach Ertz's realistic trade value is right now, would you trade him for that?

The trade deadline has historically been a seller's market, so it wouldn't completely shock me if they got more than what he's worth, if they were willing to deal him. If we're using the "Mohamed Sanu for a 2" trade as a baseline bad deadline deal, would I trade Ertz for a 2? All day. Would I take a 3? Yeah, I probably wouldn't turn that down either.

Question from Cam Fan: If Jordan Mailata continues to improve, do you try to deal Andre Dillard for a day 2 pick?

If Mailata continues to prove that he can be a starting LT in the NFL for the duration of this season, then yeah, Dillard couldn't be on a plane fast enough for a Day 2 pick.

Question from asdfjkl;: Do you see Nate Herbig developing into someone the Eagles can rely on long-term?

I do! I don't think he's an ideal starter, but if he can be a versatile interior offensive line backup in the mold of Stefen Wisniewski, those guys can be valuable. We haven't seen him in a real game as a center yet, but at a minimum, he has already shown that he is capable of playing both guard spots. I think you continue to develop him behind the scenes at center, and maybe he becomes your primary backup at three different spots.

Question from comandermolandr: Should we be worried about the Jake Elliott situation?

He has had three misses this season:

Otherwise, he's been perfect, including a 54-yarder vs. the Bengals. He's fine.