Mailbag: Should the Eagles draft a quarterback with their first round pick? 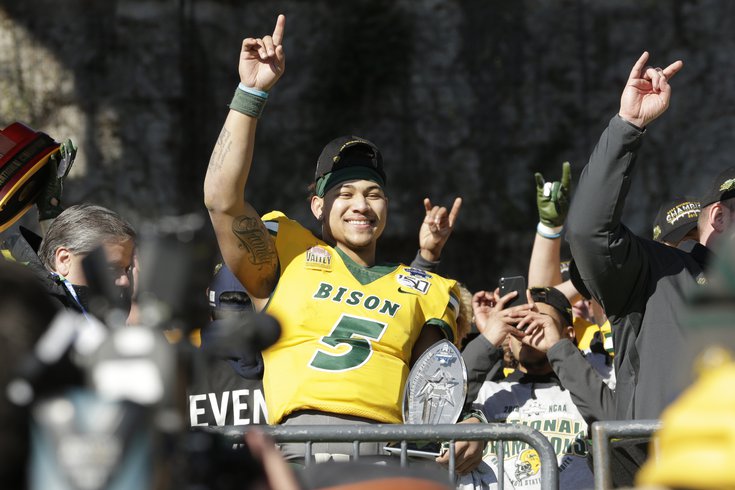 Trey Lance is a quarterback, but we don't actually mention any specific quarterbacks in this article.

In our Eagles chat on Friday of last week, there were a lot of questions that we could not get to in time or other questions we did answer but could use more color. And so, let's do a mailbag post to answer some of the overflow, as well as some commonly asked questions on Twitter and via email.

Question from Dak: If Wentz is on his way out, which seems likely at this point, do you think the Eagles should be doing everything they can to get one of the top three QBs in this draft? Jalen Hurts, in my view, doesn't look like he can be a top 10 QB in the league but he might be good enough to keep the team away from being in striking distance from top QBs in future drafts. With such a strong top tier of QBs in this class it feels like a no-brainer to get one of those guys.

Question from griffybets: I don't get the buzz about drafting a QB. You picked Hurts with your second round pick and blew up a relationship with Wentz to get him in. Why not give him an entire year as the leader of the offense? If it works out, then you've got your guy and a difference maker from No. 6 in the draft. If it doesn't, you have a top pick and a chance at a QB next year. What am I missing here?

Let's lump these questions together, because they represent opposing viewpoints. Also, I should note first that these questions came before Doug Pederson's job was reportedly even in danger, much less before he got fired. In other words, while Wentz looked at the time like he was on his way out, logically, his chances of remaining on the team in 2021 increased when Pederson was fired, given reports that Wentz's relationship with Pederson had been fractured. Still, the feeling here is that it's not suddenly a given that Wentz is back. His future with the team remains in question, and has yet to be decided.

If the Eagles bring back Wentz in 2021, they are essentially also committing to him in 2022 as well, as we pointed out in detail when we took a detailed look at Wentz's contract a few weeks ago. As such, if he is back, it's hard to envision the team drafting another quarterback.

If Wentz is a goner and there's a quarterback that the team really likes in the draft, go get him. I repeat this mantra often, but in the NFL, you either have a quarterback, or you don't, and if you don't, you have very little chance of contending for a Super Bowl.

This is a strong quarterback draft class, as there are four that could reasonably go top 10. Personally, I agree with the first question that Hurts wasn't so good that the Eagles should put off drafting a quarterback if a really good one is available. You have to get that position right, and if you're in a position to get a quarterback you think can be a stud at pick No. 6 (or higher if you move up), it's perhaps wise to strike while iron is hot, so to speak, rather than (a) depending on picking that highly again, and (b) hoping for another strong quarterback class down the line.

Would an impact player at WR be nice? Of course! But ultimately, the quarterback is going to have the biggest effect on the number of games you win, and it's not even close.

Question from Hinkie: Could you see both Wentz AND Hurts getting traded? If I were GM, and there was a guy I liked at the top of the draft, that'd be my play. Go get him. None of this QB factory/competition nonsense. Get your guy and actually put him in position to succeed.

What's the return? Am I taking a loss on the initial investment of a second-round pick? If so, while I don't think Hurts was spectacular (as noted above), I do think he showed enough that it's worth seeing if he can develop. I wouldn't just throw that away to make a rookie quarterback more comfortable. Am I getting a top 50 pick for him? If so, then sure, trade him and sign a low-cost veteran for the rookie to eventually beat out, whether that be a Pederson-McNabb situation, or if the rookie shows that he can start from Day 1.

Question from Mark: If Penei Sewell is there at 6, do you take him?

If you're not going quarterback, then yes. The Eagles have a lot of depth at offensive tackle, with Andre Dillard and Jordan Mailata set to compete at LT. At RT, Lane Johnson will be returning next year, with Jack Driscoll serving as a competent backup.

But Sewell would be a guy that you just take because of (a) how good he is, (b) the importance of his position, and (c) because Dillard and Mailata aren't sure things.

Question from Matt: Removing their rookie season from the equation for a second, how would you rank the following five prospects if they entered the draft at the same time: CeeDee Lamb, Henry Ruggs, Jerry Jeudy, Ja'Marr Chase, DeVonta Smith.

Last year, I had Lamb 1, Ruggs 2, Jeudy 3. Keeping that same order with those three guys, I would stack them like this:

Question from Mondor: Under-discussed draft possibility: Howie reaches for the top DT/DE at 6 and makes us all cry?

It's just not a very strong defensive line draft, either at the top, or throughout, and I'm sure the Eagles aren't thrilled about that. But yes, I think it would indeed be a reach to take any defensive lineman at No. 6.

Question from Jerry: I saw your comment about Nilla Wafers being better than Oreos. Have you not recovered from the beating you took on your cereal mock draft that you want to bring this on yourself again?

Also, my cereal mock draft wasn't too bad, in terms of furious feedback.

For the most part, I'd keep that as is, though I'd definitely move No. 11 out of my top 12. Sprinkled Donut Crunch was a Howie pick.

Anyway, it was my candy mock draft that got widely panned.

People really had a problem with the sugar fruit slices at No. 3 (they're outstanding if you get them at a proper candy store), my gummi octopi at No. 5, and many felt that orange tic tacs aren't candy, lol.

Maybe I'll do a cookie mock draft this year.