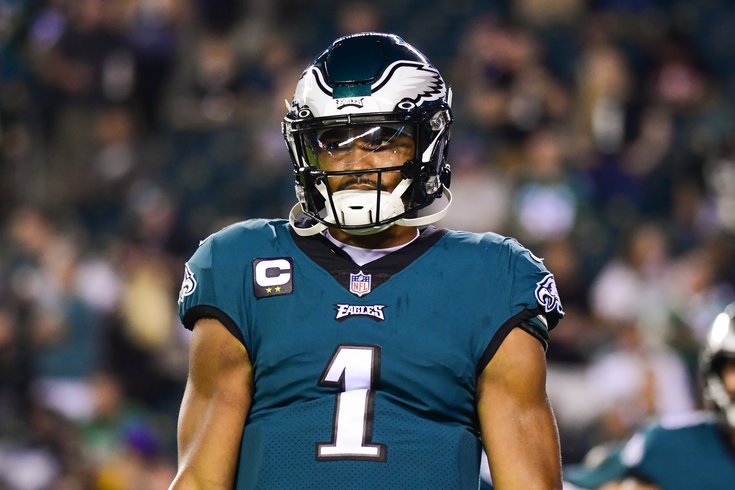 Question from Freddie's hands: Assuming Hurts keeps up this level of play, what can he expect for a contract in the offseason, and do the Eagles have the space for it?

It's pretty crazy that in such a short amount of time the "big question" surrounding Hurts abruptly changed from "Is he the long-term answer at quarterback?" to "How much are the Eagles going to pay him this offseason?".

Before the Eagles got a long-term deal done with Carson Wentz in 2019, it was a lot easier to guess where the numbers were likely to land, as well as some of the other details. In 2022, it has gotten a little muddier. That is because the Cleveland Browns gave Deshaun Watson a potentially market-altering fully guaranteed five-year deal worth $230 million.

In the wake of the Watson deal, Lamar Jackson reportedly turned down a five-year deal that would have beaten a deal done by Russell Wilson, who earned $49 million per year. It also reportedly would have "approached" Aaron Rodgers' $50 million/year deal. In other words, he reportedly turned down a five-year deal in the ballpark of $245-250 million. Jackson's sticking point was that it was structured like a more traditional quarterback contract, and he was instead seeking a fully guaranteed deal like Watson's. And why shouldn't he? He's a much more accomplished quarterback on the field, without Watson's grossness off it.

Hurts' situation would not mirror Jackson's closely. Jackson is playing the 2022 season on his fifth-year option, making a little over $23 million. If Hurts does not sign a long-term extension next offseason, he will play the 2023 season on a "Proven Performance Escalator" number somewhere in between roughly $2.6 million and $4.3 million, depending on whether or not he earns a Pro Bowl nod. He is probably not in as good a position to demand a fully guaranteed deal.

The better comp for Hurts is probably Kyler Murray, who scored a five-year extension worth $230,500,000 ($46.1 million per year), beating Watson's total amount by $500K, but is "only" fully guaranteed for $103,300,000. The guess here is that the Eagles have to beat that contract, at a minimum, if Hurts continues to play anywhere near the level he has played over the first three games of the season.

As for whether the Eagles can actually do a deal like that or not, yes, contracts can be structured in ways that the cap hit in the initial season is extraordinarily low relative to the other years on the deal. That's not an issue. The issue is that in 2024 and beyond, Hurts' contract becomes a very large "rock in the jar," making it more difficult to add premium pieces around him.

Update: Also, just to note, under league rules, Hurts cannot receive a long-term extension until after his third season in the NFL (this season) is complete.

Question from Cutter: Brandon Graham is playing great, but without Derek Barnett around him, depth is minimal and I'm worried he might wear down. Any thought to trying Milton Williams or one of the Johnsons at DE?

You, sir, have just revealed that you're not reading my snap count posts. That's a demerit. As noted on Monday, BG did his damage on just 27 snaps.

Williams is purely a DT these days. They cross-trained him at DE and DT in training camp last year, but at some point he stopping repping at DE. I think they want him to focus on the interior. Patrick Johnson and Kyron Johnson are too small to play BG's role.

I do agree that DE depth is a little suspect, and that is why I believe that is the position they're most likely to target at the trade deadline.

Question from Bird Gang: Is Marlon Tuipulotu's playing time up because they've been up a lot in games and Gannon wants to keep Fletcher Cox and Javon Hargrave fresh, or is he really earning it? I think he's played well.

In my opinion, Tuipulotu was the most improved player in training camp this year. He has earned more time, and I think he's taking advantage of it. His hit on Jared Goff is what led to James Bradberry's pick-six against the Lions. He'll be a part of the rotation all season.

As for Cox and Hargrave, I do think it's wise to try to keep them fresh, but I can't say that I've looked specifically at their second half usage. I do know that Tuipulotu has gotten a decent number of first half snaps, so he's not just getting garbage time.

Question from Jack: Where do you think that Saints pick will end up? I'll allow a 5 pick range to be the guess.

A week ago, I'd have said that it would land somewhere around the 14-18 range. But after a loss to the freaking Panthers and Jameis Winston's back issues, I'm gonna slide that back a bit. Let's go with 11-15.

Question from Kephas: In retrospect, which was worse? The extension/guaranteed money for Alshon Jeffery, or the four-year, $72 million contract the Giants gave Kenny Golladay?

The Golladay signing probably set the Giants back more than the Jeffery restructure set back the Eagles. But from a pure "process" perspective, there was very little upside for the Eagles in doing that deal. The benefit was that Jeffery took a meager pay cut. The risk was in no way worth the reward. At least with Golloday, the upside was that he could become the productive receiver the Giants desperately needed. So I think my answer is that the Jeffery restructure was worse. I think the big difference is that the Jeffery restructure might be the most illogical move of Howie's career (or at least one of), whereas that Golladay signing was just another day at the office for Dave Gettleman.

Question from greenwithenvy: Will DeAndre Hopkins be back in time for the Eagles-Cardinals game next week?

Question from TheGhostofNormVanBrocklin: I've sat in the same seat three weeks in a row during Eagles games. Should I remain there all season?

Do you even have to ask this?

I love bagels, but I recently read an article claiming that they're even unhealthier than donuts. I researched it some more, and apparently that's a pretty common take. So they're ruined for me now, thank you very much, internet. These days if I'm willing to eat something geared solely for taste in the morning, I'll go with a croissant, which again, not great for you, but not as bad as a bagel.

Question from Federico: If you had to choose to cover another NFL team, what team would you pick?

I think about this quite a bit, and maybe at some point 10 or so years from now when I don't feel like working hard anymore I'll move to a warm weather area and if there just so happens to be an NFL team there, I'll be a columnist who writes like one thing per week. So my top candidates just on geography alone would be the Chargers, Rams, 49ers, or Cardinals. I might also consider the Buccaneers if Florida's descent into something resembling a fascist state wanes a bit.

But in terms of actual football coverage, there is no better team to write about than the Eagles. Good or bad, they're always active and interesting, and the fans are always engaged.