Is Shane Steichen the next top head coach candidate? – What they're saying about the Eagles 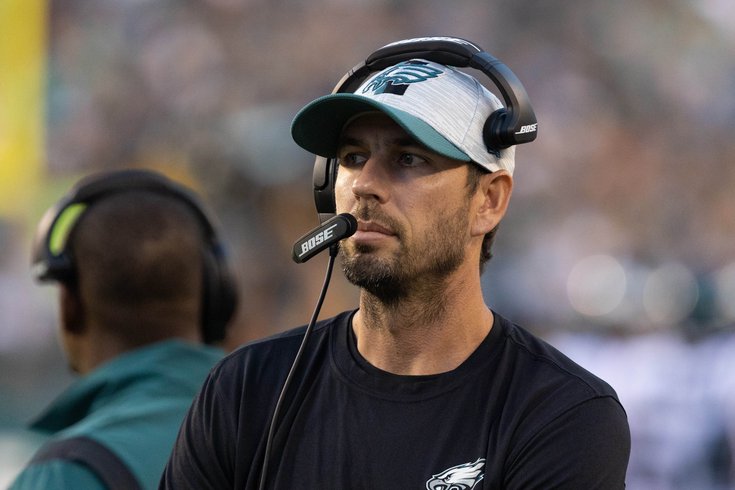 Doug Pederson's return to Philly has dominated most of the conversation leading up to Sunday's Eagles-Jags games, but the Birds' 3-0 start has more than a few other story beats going around too

We checked in on some on Tuesday, but didn't get to every one, so here are a few more things being said about the Eagles:

Steichen the next head coach?

The Eagles' offense is looking pretty efficient right now, and when a unit is firing on all cylinders like that it usually means that coordinator is going to get some looks as a potential head coach.

Could that be Shane Steichen in a few months?

Well, the first one is in order. Steichen is our top candidate for the 2023 season. In the pressing search for the next great offensive-minded head coach, Steichen seems to have slipped between the cracks despite a strong track record. He was instrumental in preparing Justin Herbert for his surprise rookie season (Herbert was thrust into a starting role with almost no preparation) and has been equally important in the development of Jalen Hurts—the Eagles’ offense is behind only Miami, Kansas City and Baltimore in terms of efficiency. It’s not hard to see their multifaceted approach, which helps Hurts and the Eagles transcend the idea of a “system,” being copied around the league. Steichen is a mastermind at creating mismatches and had a roster trending in the right direction with a rookie receiver as the primary passing threat in ’21 before Philadelphia upgraded their talent set. [Sports Illustrated]

Defensive coordinator Jonathan Gannon is also further down on the list. He's been in the head coaching conversation for a while now, and after a rough opening game against Detroit, has been running a defense that has looked fierce against Minnesota and Washington the past two weeks.

If you had taken a drink every time Troy Aikman said “Jonathan Gannon” during the Eagles’ Monday Night Football dismantling of the Vikings in Week 2, you would have needed a stomach pumping. This is for good reason, though. Gannon was high on the Texans’ wish list a year ago and interviewed with the team before they promoted Lovie Smith. This offseason, Gannon’s list should be far more substantial. His Eagles defense is currently the third-most efficient passing defense in the NFL. As a complement to its offense, the unit is versatile and ever-changing to fit the strengths of its personnel. [Sports Illustrated]

The Eagles came storming out of the gate, marked by a statement win over the Vikings on Monday Night two weeks ago. So far, everything's been working. The defense is dominating and the offense has been scoring, in the first half at least, like a machine highlighted by a much improved Jalen Hurts under center.

Alongside them, the Dolphins, and the Doug Pederson-led Jaguars, the Ringer's Steven Ruiz ponders if any of the three could be the surprise Super Bowl contenders this season in the way of the 2021 Bengals.

Wrote Ruiz of the Eagles:

While it feels like the rest of the NFC’s top contenders are struggling to overcome obvious deficiencies—especially on the offensive side of the ball—the Eagles have no such problem and now have the best odds of winning the NFC’s no. 1 seed by a wide margin. Per FiveThirtyEight’s model, Philadelphia’s odds of finishing with the conference’s best record sit at 40 percent. The Bucs are the next-closest competitor, with an 18 percent shot.

I won’t fault you if you continue to question Hurts—even during his recent prolific outings, there have been plenty of shaky moments. But there isn’t a steadier offense in the NFL right now, and there isn’t a more complete team. Complementary football wins in January. If the Eagles keep this up, they could be playing even later into the calendar. [The Ringer]

Speaking of Hurts, EA Sports gave him a ratings boost in "Madden 23" this week. He's up to 77 overall now, which is three points better than what he was when the game launched back in the middle of August. Still pretty light if you ask me.

Madden ratings are always a huge talking point amongst fans and even the players themselves, but online gaming and the ability to update games on the fly have made for a constant and fluid discussion. The conversation doesn't stop once the game's out. The rating a player starts with is never the one they end with, so it's cool to see Hurts trending up, though it still probably doesn't bring him up far enough to be one of the funner QBs to play as.

I've been playing "Madden 23" on and off in the weeks since it came out, so here's a quick review if interested:

There's some nice John Madden tribute stuff at the start, but once you get past that, it just falls back into the buggy mess the series has been for the past few years.

Basically, the game looks nice on the surface, but the more you play it, the more it falls apart.

I was pretty done with the game after I got stripped-sacked using Hurts and the game locked up control on me because of it. The game was still live, the other team could move, but I couldn't. That was infuriating.

Anyway, T.J. Edwards got a boost too and he's been a pretty underrated aspect of the Eagles' success at linebacker.

Be sure to vote again next Tuesday, when you’ll be able to tell us the next player who should receive a rating bump! 📈 pic.twitter.com/k6TgIkfN2V