A look at the Eagles' 2023 free agents, and who could be in-season contract extension candidates 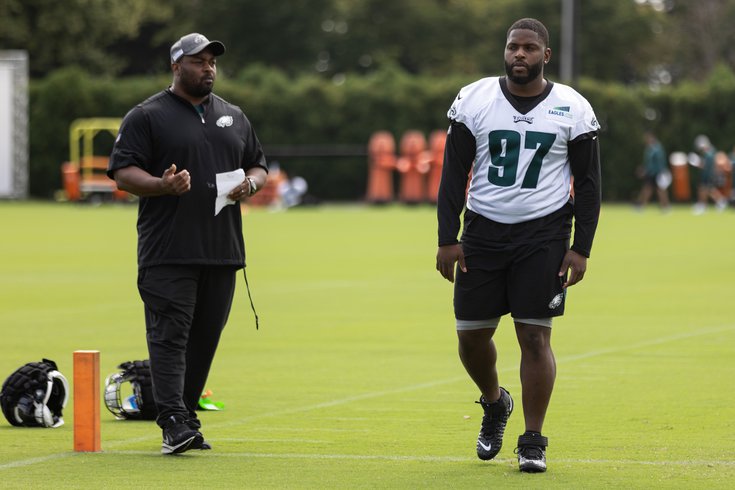 By my count, the Philadelphia Eagles have 18 players on their roster playing on the final year of their contracts, including players on PUP or IR. Here we'll put those 18 soon-to-be free agents into various buckets, and analyze which of them the Eagles should be interested in keeping in Philly, long-term.

• DT Javon Hargrave: Hargrave has a $12,750,000 base salary in 2022. The next closest base salary on the team? Gardner Minshew and Chauncey Gardner-Johnson, who are both playing on fourth-year PPE pay at $2,540,000. Why is that? Well, Howie Roseman's modus operandi is to take base salaries, turn them into signing bonuses, and dump salary cap commitments into future years.

Hargrave is the only player on the team with a meaty base salary that has not yet been restructured. That's a pretty good indication that the Eagles and Hargrave are working on a contract extension that would also lower his 2022 cap number. My guess is that something will get done here, but with Hargrave turning 30 in February, the Eagles probably won't want to extend his contract by more than a year or two.

Has entered the conversation

• S Marcus Epps: Epps was the Eagles' best safety in training camp, by far, and he has remained that into the regular season. The Eagles could view him as a long-term answer and reward him with an Avonte Maddox-like extension.

• OL Isaac Seumalo: Seumalo signed a very team-friendly, three-year extension worth $17.6 million in 2019. He missed 7 games in 2020, and 13 games in 2021, but has been a quality starter when healthy. Seumalo is healthy again and has had a good start to the 2022 season. If he's willing to do another team-friendly deal, I think the Eagles would be interested.

Who the hell knows?

• DT Fletcher Cox: This past offseason, as you'll recall, the Eagles cut Cox, putting his old confusing-ass contract in a grave (thank God), and for a brief period he was free to sign with any team. The Eagles then brought him back at a baffling one-year deal worth $14 million.

Well, Cox is suddenly rejuvenated and playing a high level once again, so who the hell knows what Howie will do next with Fletch.

• T.J. Edwards: Edwards has been fantastic so far this season. He's been instinctive and violent, and continues to be the Eagles' best linebacker. Still, how the Eagles value him is a bit of an unknown. They would have been happy to trade him leading up to the season last year, but were fortunate that they couldn't find any takers. The Eagles have also shown over a long period of time that they do not like dumping valuable resources into the linebacker position.

Losing Edwards next offseason could be a significant blow to a defense that has finally found stability at linebacker after about a half decade of Nate Gerry and the like. I'm sure the Eagles would be happy to do a team-friendly deal, but Edwards has probably shown enough to other teams around the league that he's worthy of a decent pay day.

• LB Kyzir White: White has assimilated nicely into the Eagles' defense, and has shown that he is a quality cover guy who can also run sideline to sideline against the run. Like Edwards above, there's an argument to be made for doing an extension in-season.

The wildcard in the linebacker equation is Nakobe Dean. Do the Eagles think that Dean can become a quality starter in 2023 and beyond? If so, they can perhaps focus their efforts on getting a deal done with one of Edwards or White next offseason, similarly to the way they kept one of Anthony Harris and Rodney McLeod at safety this past offseason.

My guess is that there won't be an in-season contract extension for either player, but if one gets done, it's more likely to be Edwards.

The other position the Eagles don't highly value

• RB Miles Sanders: I think it's more likely that the Eagles trade for an additional running back than it is that Sanders gets a multi-year in-season contract extension.

• CB James Bradberry: The Giants did Bradberry the disservice of cutting him in May, two months after free agency opened. In his initial press conference after signing with the Eagles soon after, Bradberry was honest in saying that he was looking forward to hitting the free agent market next offseason after he had to settle for a below-market deal in Philly.

That doesn't mean a deal can't get done between Bradberry and the Eagles. In 2017, for example, Alshon Jeffery signed what was believed to be a below-market deal with the Eagles, and he played his way into a more lucrative contract extension. Bradberry could theoretically do the same.

Gardner-Johnson is transitioning from more of a slot corner role to safety, and while those positions have some overlap, it may take some time for him to settle in to his new spot. The Eagles should wait and see if he can become a plus starter before they open up their wallets for him.

• WR Zach Pascal: Pascal signed with the Eagles on a very reasonable one-year deal worth $1.5 million this past offseason. He is unlikely to put up good numbers playing behind A.J. Brown, DeVonta Smith, and Quez Watkins, and thus is unlikely to attract any really good offers from other teams. At the same time, he could still end up being a valuable role player for the Eagles this season, and a guy they want back. He feels like the type of player the Eagles would say, "See what you can get, and give us the opportunity to match." But an in-season extension is unnecessary.

Going to test the market

• QB Gardner Minshew: Minshew wants to be a starter, and he's likely eager to look for starting opportunities next offseason. Whether he finds one or not remains to be seen.

My sense is that if the Eagles think they are going to be Super Bowl contenders for a while, they would prefer a veteran backup as opposed to a draftee. If Minshew strikes out on the starter front, the Eagles would certainly love to have him back, seeing as he'll already have two years experience in the system.

• LT Andre Dillard: Dillard remains on injured reserve after injuring his forearm leading up to the season. His timeline for recovery should be in the ballpark of, well, right around now to roughly the next couple of weeks. If the Eagles are looking to add a player at the trade deadline to bolster their Super Bowl chances, maybe Dillard could still be a trade chip?

Of course, their willingness to deal Dillard would be dependent on what they think of Jack Driscoll as a swing tackle, as well as how capably guys like Josh Sills or Brett Toth could fill in at LT in case of an emergency.

• C Jason Kelce and DE Brandon Graham: Technically, these players aren't considered free agents in 2023, because they have scheduled salaries on the books. However, those salaries will become guaranteed for like eleventy bajillion dollars on certain dates, so action will be required by the Eagles (or the players) before those dates. Kelce will decide on a year-to-year basis whether he wants to continue to play in the NFL, and Graham is probably right there with him at this point. Both of these guys have shown early on this season that they can still play at a high level.

• RB Boston Scott: There was a point this offseason in which the Eagles opted not to tender Scott as a restricted free agent. He became an unrestriced free agent free to sign with any team, but eventually returned on a cheap deal. He is not an in-season extension candidate.

• OT Brett Toth: Toth remains on PUP as he continues to recover from a torn ACL.

The Eagles will still control their rights

• OG Sua Opeta (RFA): The Eagles can evaluate Opeta's season at year end and determine if he's worth a bump in pay for one year at an estimated $2.6 million in 2023.

• TE Tyree Jackson (ERFA): Jackson will be an exclusive rights free agent and can be brought back at very little pay in 2023.