Mailbag: Who is the Eagles' 'X-factor' against the Buccaneers? 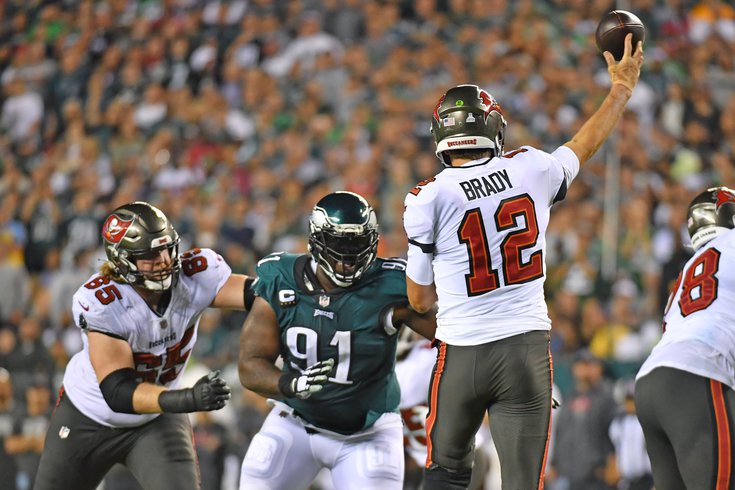 The Eagles could really use a big game from Fletcher Cox against the Buccaneers.

Question from Pete: Which player is more important to have a big game for the defense this weekend, Darius Slay or Fletcher Cox? Who is more likely to have a big game? It would be nice to have one last Fletcher Cox domination game. Heck I’d take a few disruptive series from him at this point.

It's more important that Slay has a good game, but because he has been so consistently good this season, we have sort of come to expect that. Cox is more of an X-factor. As we noted in our five matchups to watch when Tampa has the ball, if he and Javon Hargrave can be disruptive on the interior of the D-line, Tom Brady can be affected by pressure right in his face. If Cox can step up and have a vintage "in his prime" game, that would go a long way toward upsetting Tampa.

Question from Tito's Handmade: Forecasts say it’s supposed to rain in Tampa for the game. We got this one in the bag right?

It rained very hard for a while this morning, but as I type this at 8:08 a.m. in my Tampa hotel room, it has stopped.

As I have noted elsewhere, I don't think bad conditions are necessarily an advantage for the Eagles. Yes, bad weather games can help teams that can run the ball effectively, however, for a team that is already challenged in the passing game, bad conditions only make them all the more one-dimensional.

Where I see bad weather as an advantage for the Eagles is the mere fact that they are heavy underdogs in this matchup, so any variable that can can be thrown into the mix is not desirable for a heavy favorite, who should theoretically be able to take care of business in ideal conditions. With heavy winds, or a slick ball, maybe there's an unlucky Bucs turnover that benefits the Eagles?

Question from OppsItNoWorking: After the wild card round, is it still highest seed vs lowest seed?

Yes, for those of you who are fans of other sports just now checking in on the Birds, playoff seeding in the NFL is different from, say, the NBA. In the NBA, if the 1 seed is able to take care of the 8 seed in the first round, they automatically play the winner of the 4/5 seed series, even if there's an upset result in other series, like a 6 seed beating a 3 seed, for example.

That's not how it works in the NFL. After each round, the 1 seed gets to play the lowest remaining seed. In the case of the Eagles, who have the lowest seed in the NFC, they will definitely play the 1 seed Packers in the divisional round if they find way to beat the Buccaneers in the wild card round.

Question from Pragmatic: If the Eagles win, they play the Packers, in which case the winner of the Rams-Cardinals Monday Night Football game would play the 49ers-Cowboys winner. That means the Eagles have to play Saturday in Green Bay, right?

Because the NFL schedules one AFC game and one NFC game each on Saturday and Sunday (or at least they have every single year since the league moved to a 6-seed format), yeah, you can count on the Eagles playing next Saturday in Green Bay if they advance.

Question from Hinkie: What happens with Brandon Brooks' cap hit if he retires?

Normally, if a player is released, whatever guaranteed salary is left on his deal, and any prorated bonus money that has already been paid out to the player will remain on the team's salary cap.

If a player retires, he does not get paid his salary (duh) or any roster bonuses, but any prorated bonus money that has not yet counted toward the salary cap will count toward the salary cap. There have been some occasions in which teams have attempted to recoup signing bonus money after a player unexpectedly retired, but that feels like an extreme unlikelihood in Brooks' case.

The short answer is that if Brooks retires, it will very likely work the same way as an outright release. The Eagles would be left with $15,736,472 in dead money, which they could spread out over two years if Brooks doesn't file his retirement papers until after June 1, in which case it would be treated the same way as a June 1 release.

Question from NoCo Philly fan: What's the minimum the Eagles should move Gardner Minshew for? He's valuable as a backup, but a fourth rounder for someone the Eagles won't extend is pretty nice. I'd hope they could squeeze a third rounder out of him for a QB needy team needing a bridge QB.

After he is awarded a "proven performance escalator" this offseason, Minshew is going to cost around $2.4 million in 2022. That is a very cheap number for a backup quarterback. There's value in that. So if you're going to trade him, you better be getting something very worthwhile in return, because it's going to cost more than $2.4 million to replace him with a proven backup on the open market.

This is going to sound crazy, maybe, but I wouldn't trade him for less than a third-round pick. Anything short of that, and I would just keep him as my No. 2 for another season, and then if he leaves in free agency in 2023, he'll likely count for a decent value in the comp pick formula (which of course does not guarantee the Eagles a pick, depending on the balance of players lost/gained).

To be clear, I don't think anyone is coughing up a third-round pick for him, unless some team becomes desperate/stupid.

Question from Horner: Where would you rank Minshew among all backup QBs?

Doing a quick scan of the backups around the league, if I needed a guy to win a game for me today, I would take Marcus Mariota and Taylor Heinicke over Minshew. If I can take players with more upside, obviously I'm taking Trey Lance, and then other guys like Jordan Love, Kyle Trask, etc.

But depending on how you want to categorize backup rankings, Minshew is in the top 5 or so, which makes him better than some starters.

Question from Footba11Joe: Taking an injured college player has both had positive results (Landon Dickerson) and negative results (Sidney Jones). Do you think Howie would pull the trigger on 'Bama WR Jameson Williams (ACL) if he's sitting there in Round 2?

To begin, I don't think Williams is making it out of the first round. He was too fast and productive last season to last into Round 2, even with the ACL tear.

On the Eagles' recent history of taking injured guys in the second round, I would say two things:

But given that the most recent injured second round guy is a success story (so far), there's no reason to think they'd be opposed to going that route again.

Question from RKotite: With the injury to Tyree Jackson, does TE become an option in the draft?

A guy like Jackson, who showed promise in training camp, but was in the XFL in 2020 and only made his first career catch a week ago, should never prohibit a team from addressing a position in the draft. And yet, I kind of wondered if he would, given that Howie Roseman mentioned him unprompted several times as a reason they felt comfortable trading Zach Ertz.

But yes, now that Jackson is facing a difficult ACL rehab, the Eagles should be open to adding a TE2 if the right value is there in the draft.

Question from Nerd behind a keyboard: Is the Giants letting go of Joe Judge and Dave Gettleman "retirement" the worst thing to happen to the Eagles this off season? Their next hires for coach and GM have to be better than those two clowns, right?

It's hard to imagine that the Giants can top those misses. Judge was publicly visible in his clownery, but Gettleman was an outright disaster as a general manager behind the scenes. I know that people say, "I could do a better job than that guy," which is almost never true, but in the case of Gettleman, yeah, it'd be hard for even a lay person with even average intelligence to do a worse job than he did over his four years as the Giants' GM.

Back in 2019, my Giants dumpster fire article veered from the usual "Here's 10 reasons why the Giants will be bad this season," and instead I structured it around how Gettleman had destroyed their roster at literally every positional group. And then he got to remain their GM for two more years!

As long as Gettleman was around calling the shots, the Giants had no chance. Of course, John Mara has done an absolutely atrocious job of hiring people to his most important spots in the organization. Maybe they get lucky with the next GM hire? And then because Mare said the new GM would pick the next head coach, maybe they get them both right?

But yes, Judge and Gettleman (especially Gettleman) both getting the ax is a step in the right direction for the Giants, which is bad for the rest of the NFC East, in theory.