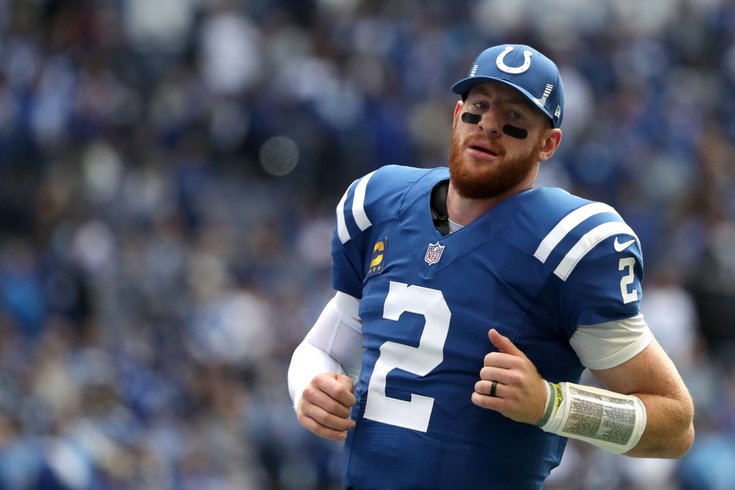 The Philadelphia Eagles trade their quarterbacks. A lot. But it had been a while when they dealt an unhappy Carson Wentz to the Indianapolis Colts in February. The most recently traded Eagles quarterback was the one who made way for Wentz, Sam Bradford, AKA Sleeves, AKA Sammy Sleeves, AKA Sleevie Wonder, in 2016.

Let's take a trip down memory lane, and look at how those quarterbacks fared with their new teams. Spoiler: Badly. That's not to say that the Eagles exactly got over on all their trading partners, as the players they drafted with the acquired picks in those trades haven't exactly lit the world on fire either.

Let's go as far back as the start of the Andy Reid era (yes, this would eliminate the quarterback trade that backfired on the Eagles a long time ago, Sonny Jurgensen).

But first, we'll start with Wentz.

After a 2020 season during which he was benched after producing the worst stats in the NFL among starting quarterbacks, Wentz successfully forced his way out of Philadelphia via trade. The Eagles took by far the biggest dead money cap hit in NFL history to deal him, but they at least salvaged a third-round pick and a conditional second-round pick (that would eventually become a first-round pick) in return.

His new home was Indianapolis, where he really couldn't have possibly hand-picked a better situation, as the Colts had a great offensive line, arguably the best running back in the NFL, a (modest) upgrade in wide receiver talent, a talented defense, and a head coach with whom he felt a special connection in Frank Reich. Off the field, Wentz said that the "culture and values" fit his vibes.

On paper, Wentz's stats in 2021 looked decent enough, as he threw 27 TDs vs. 7 INTs, but the eye test showed that he looked a lot like the "2019 version" of himself, with occasional "2020 version" awfulness sprinkled in. He made the occasional spectacular throw, but the moments of encouragement were overshadowed by his continued inability to make the "layup" throws.

The Colts lost their final two games, with Wentz serving as the primary reason why. He missed a wide open T.Y. Hilton against the Raiders Week 17 that would have likely put that game away, and he was dreadful from start to finish against the Jaguars, playing his brand of "hero ball gone wrong" that was so familiar throughout the Eagles' 2020 season.

Carson Wentz, to himself: It's just the Jags; take care of the football & let the game come to you.

In that game, Wentz had one of his vintage avoidable fumbles while attempting a toss a shovel pass as he was getting tackled. He also tossed a devastating interception while targeting a receiver who simply wasn't open.

In his after-season press conference, Reich was non-committal on Wentz's return to the team in 2022. The next day, GM Chris Ballard often vented about Wentz's shortcomings, criticizing his mechanics, his penchant for holding onto the ball too long, his inconsistency, and his instability, among other things. It was essentially a roundup of criticisms that Wentz faced from Eagles fans and media at times in Philly, but this time coming directly from the general manager's mouth. Like Reich, Ballard did not commit to Wentz in 2022.

Chris Ballard on Carson Wentz: ‘At the time, we felt it was the right decision…I’m not going to make a comment on who is going to be here next year and who is not.’

From the Colts' perspective, blasting Wentz publicly isn't exactly tactful. If they plan on moving on from him this offseason, negative comments will only serve to decrease his value. If they intend on keeping him, well, we already know how Wentz reacts when challenged to take accountability and make the improvements that his coaches deem necessary.

From an emotional standpoint, a clearly frustrated Ballard was probably just being a little too honest for his own good, after his quarterback had just wrecked a season during which seven (!) Colts players made the Pro Bowl, most in the NFL.

It's like Howie Roseman pulled the pin on a Wentz grenade, and lobbed it into Lucas Oil Stadium.

We should also probably note here that Colts owner Jim Irsay was clear to say that Reich and Ballard would return in 2022, but that significant changes must be made. If the Colts cut Wentz, he'll count for $15 million in dead money, with a savings of a little over $13 million. If they are somehow able to trade him, they'll save a little over $28 million, with no dead money left behind.

With the third-round pick the Eagles acquired from the Colts in the 2021 draft, they ended up with DT Milton Williams and DE Tarron Jackson. The first-round pick in 2022 from the Colts landed just inside the top half of the first round, at pick No. 16.

Peete was traded to the Washington Football Team for a 2000 sixth-round pick. He played in three games for the Football Team, attempting just 17 passes before moving on to Oakland the following year.

With that sixth-round pick, the Eagles selected C John Romero, seven picks before Tom Brady was taken by the Patriots.

Hoying was traded to Raiders for a sixth-round pick. He had seven pass attempts for Oakland over two years before he retired in 2001.

With that sixth-round pick, the Eagles selected center DE John Frank, 21 picks before Brady was taken.

Feeley was traded to the Dolphins for a 2005 second-round pick. He saw action in just 11 games in Miami, posting a horrendous 61.7 QB rating. Midway through the 2005 season, the Dolphins traded Feeley to the San Diego Chargers for Cleo Lemon.

With that second-round pick, the Eagles selected WR Reggie Brown, who caught 177 passes for 2,574 yards and 17 TDs in five seasons in Philadelphia.

Holcolm was traded to the Vikings for a sixth-round pick in 2009. He played in three games for the Vikings in 2007, posting a 73.1 QB rating. He retired the following offseason.

The Eagles then traded that sixth-round pick along with the 21st overall pick for the 19th overall pick in the 2009 draft, and selected Jeremy Maclin.

The Eagles selected Nate Allen with that second-round pick. The fourth-round pick turned into LB Casey Matthews and a 2012 fourth-round pick, which was used along with another draft pick to acquire LB DeMeco Ryans in a trade with the Texans.

Kolb was traded to the Cardinals for a second-round pick and CB Dominique Rodgers-Cromartie. Kolb ended up starting just 14 games for Arizona, posting a QB rating of 83.2 in two years there. He suffered a slew of injuries, including turf toe, a concussion, and a rib injury, before the team asked him to take a pay cut. When the Cardinals and Kolb could not come to an agreement on a restructured deal, they cut him.

After a trade back, that second-round pick became DE Vinny Curry and CB Brandon Boykin.

Foles was traded to the Rams along with a second-round pick for Sam Bradford. In his only season with the Rams, Foles was arguably the worst starting quarterback in the NFL, posting a 69.0 QB rating before being benched in favor of Case Keenum. He was released after one season and signed with the Chiefs, before returning to Eagles, and yada yada yada, a million-plus fans in the streets of Philadelphia chanted triumphantly about the size of his genitalia.

Barks was traded to the Cardinals for a seventh-round pick. He was a regular on the Cardinals' inactive list during the 2015 season, never getting into a single game. The Cardinals eventually released him.

The Eagles selected LB Joe Walker with that seventh-round pick.

The Sanchise was traded to the Broncos for a conditional seventh-round pick. Sanchez lost a quarterback competition to a Trevor Siemian, a guy with zero career pass attempts at the time. He never made Denver's 53-man roster, so the pick never conveyed.

After then-Vikings QB Teddy Bridgewater suffered a gruesome, career-threatening leg injury in practice just before the start of the 2016 season, Sleeves was traded to Minnesota for a first-round pick in 2017, and a 2018 fourth-round pick that could have become a third- or a second-round pick based on unlikely conditions that weren't met. The Vikings started 5-0, but lost 8 of their next 10 games and did not qualify for the playoffs. Bradford's play looked better in the stat sheet (he completed 71.6 percent of his passes) than it did in reality, as he never met a checkdown that he didn't embrace.

Bradford finished the 2016 season with a 7-8 record. He played two games in 2017, both wins, but was shut down for the season after wear and tear eroded away on his surgically repaired knees.

The Eagles selected DE Derek Barnett and DE Josh Sweat with the two picks acquired in that trade.

The Eagles signed Flacco during the offseason, and he was the No. 2 quarterback, for a while anyway, but became something of a lame duck No. 2 after the Birds traded for Gardner Minshew just before the start of the season. The Eagles would eventually deal Flacco to the Jets for a sixth-round pick in 2022. He started one game for the Jets, a 17-24 loss to the Dolphins, and made a brief appearance in a 17-45 loss to the Bills.

A updated snapshot of the traded Eagles quarterback stats with their new teams: