NFL Wild Card Odds: Five bets we like for Eagles vs. Buccaneers

Will Jalen Hurts score a TD? Will Tom Brady hit the over on passing yards? And will the Birds cover the spread? 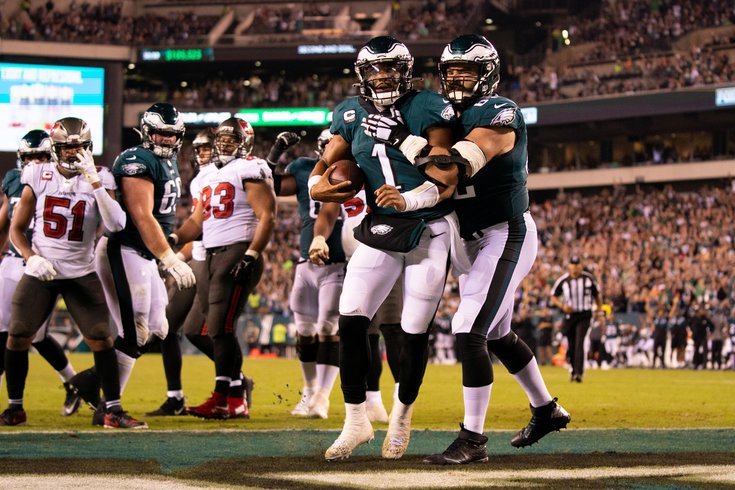 Philadelphia Eagles quarterback Jalen Hurts celebrates with center Jason Kelce after running for a touchdown against the Tampa Bay Buccaneers.

The only thing better than watching our Philadelphia Eagles march on to victory is winning money alongside the team. While beating Tom Brady and the Bucs may be too tall of a task, we have some great opportunities to make money off this game. Don’t ever believe someone telling you never to bet your own team – as nobody knows the intricacies of your team like you.

We know the Eagles and their capabilities, the ceiling and floor of expected results. We’ve also seen the Bucs up close and personal, as well as that pesky quarterback. Let’s look at five huge plays on the Eagles-Bucs game this Sunday in Tampa Bay that could pay off — even if the Eagles don't pull off the upset.

Even if things revert to the first half of the season for the Eagles – unable to compete with the Bucs for the second time – we have a strong backdoor cover. The Eagles still have an amazing playmaker in Jalen Hurts who can take advantage of softer defenses later in games. Who cares if it’s garbage time? It’s how teams cover numbers larger than seven. That’s the worst-case scenario. The other is simply the Eagles are for real and hang in this game – or even win outright. Either way you must take the Birds getting anything over 7.5 points, and that's currently the case at all the books with Eagles vs. Bucs odds listed at Sidelines.io.

The Bucs score points at home and the Eagles have big-play explosiveness in their offense. The Tampa passing defense isn’t good and the Eagles are going up against Tom Brady. The Bucs aren’t going to hold on to the football to keep Jalen Hurts from running against their third-ranked rush defense. They will try and move the ball down the field and put this game out of reach. The Eagles may try and hold on to the ball, but they can break a run on any play. The over was 10-7 this year for Philadelphia, and 5-3 at Raymond James Stadium – with an average of 50 points scored per-game. Get it at 45.5 before it goes up.

I did a double-take at this return because of how deadly Hurts is on the ground – especially as he gets closer to the goal line. He’s a true DFS vulture that would make the likes of Lamar Jackson and Josh Allen proud. While his ten rushing TDs came in bunches, we have to honor the matchup here and how Hurts may be the Eagles lone shot on the ground. Nick Sirianni may see the Bucs close on running backs, making Hurts the most viable weapon to run the ball. Be it designed RPOs or breaking out of the pocket, Hurts will be the main threat from 80 yards out or 1 yard from the end zone.

We expect Brady to throw a lot no matter who is around him. Down Chris Godwin and Antonio Brown, Brady could show up cold without knowing his receivers and still put up 300 in his sleep. The Bucs saw Brady go over this number ten times this season – including the last two “tune-up” games. The Bucs offense isn’t going to change much with a couple of players absent. We also still need to see some actual defensive adjustments made by the Eagles staff – rather than being bailed out by players.

Without two field-stretching receivers to throw at on Sunday, expect Brady to tag Gronk a bunch. We are playing off the obvious absence of Godwin and Brown, but also the elevated playoff connection Gronk has with Brady. There will be quick passes across the middle and some deep shots downfield, but the Eagles will have their hands full with Gronk.