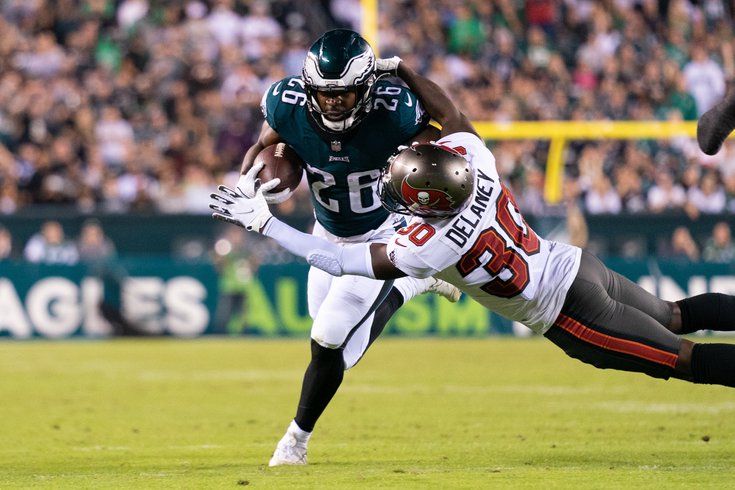 Miles Sanders carried the ball nine times against the Bucs back in Week 6.

That's right, the Birds are back in the playoff — and will be going up against old foe Tom Brady and the defending champs this weekend — after missing out for the first time since the 2016 season last year. And the perhaps sooner-than-expected playoff berth comes as a surprise to many, including Eagles fans, who for the most part were just looking for some growth in the first year under Nick Sirianni.

Instead, they watched a 2-5 start turn into a 9-8 finish and the NFC's third wild card spot under second-year quarterback Jalen Hurts. And now, a season of no expectations has quickly morphed into one where the fans want a win more than anything. And who can blame them? This isn't the regular season. The fact-finding mission on Sirianni and Hurts is all but accomplished. And they have absolutely nothing to lose against a Bucs team that should be the one under pressure.

Still, not a lot of people are picking the Eagles, who are 8.5-point underdogs in Tampa, to pull off the upset. But there are some who believe they'll at least cover the spread. We've already looked at the injuries to both teams, given out matchups to watch for both the Eagles and the Bucs, offered up some bets we like and made our predictions (as well as a roundup of some from the rest of the media). Now, as we do every week, let's take a look at five numbers to watch in the form of our weekly over/unders...

That's the current total being offered at most of the sports books over at Sidelines.io, but not all of them. There is one outlier, with DraftKings' total coming in at more than a field goal above that at 49 points. And, honestly, if you look at our staff predictions and the fact that both teams are in the top 12 in scoring this season — not to mention that each offense features a unit that's No. 1 in one area (the Bucs through the air and the Eagles on the ground) — it's not hard to imagine a scenario where that higher number is actually the more accurate one.

Sure, the Eagles are likely going to try to slow the tempo down with a methodical ground game, but our writers' predictions average a massive total of 57.4 points with all but one of us (Jimmy Kempski) believing this one goes over the 45.5 total being offered at most outlets — and all but two of us believing it goes over 49.

Do with that information what you will.

As we mentioned above, the Eagles are the No. 1 rushing team in the NFL, averaging an impressive 159.7 yards per game on the ground, a number that balloons to 189.8 yards per game over their final 10 outings of the regular season, once Sirianni switched his team's offensive identity. The Bucs, meanwhile, have the third best run defense in the league. They allow just 92.5 yards per game, including the 100 yards they surrendered to the Eagles back in Week 6.

But this is a different Eagles team — and the one that lost to the Bucs that day only ran the ball 19 times, including just nine times with their running backs (Miles Sanders, who will be back on Sunday, got all the carries). Some of that was because the Eagles were playing catch-up, but they still averaged over 5 yards per attempt, well above the Bucs' season average of 4.3 YPA. Add on to that the fact that the Bucs run defense hasn't been quite as good in recent weeks, allowing an average of 112.7 yards per game over their last seven, despite a two week stretch where they held the Saints and Panthers to 61 and 67 yards on the ground, respectively.

What does that mean for Sunday? It likely means that if the Eagles are able to keep it close and stay committed to the run, that they should be able to put up some decent numbers on the Bucs. Unfortunately, the belief here is that Tom Brady and Co. are just going to be too much, forcing the Eagles to play from behind. If the Birds can hit the over here, it gives them the best chance to pull off the upset. Unfortunately...

Jalen Hurts ran for a pair of second-half touchdowns against the Bucs back in Week 6 to go along with a first-quarter touchdown pass to Zach Ertz. And, honestly, that's basically the blueprint we see for Sunday's game.

Despite the Eagles being a better team than the last time these two met — and Hurts looking like a better QB in a more tailor-made offense — we still believe that the Bucs are the better team here and will eventually get out to a lead over the Birds. And when they do, the defense will drop back and allow Hurts to dink and dunk (and run) his way down the field. Look for Hurts to get two earlier touchdowns to keep the Eagles in it, and then pick up a late rushing score once the outcome is more or less assured. Still, a good performance from Hurts, even in a loss, will likely leave the fanbase feeling pretty good about the season.

Tom Brady is 44 years old. He threw for 45 touchdowns this season. And if not for Aaron Rodgers, he would likely headed for his fourth MVP award. This week, he'll be facing an Eagles secondary that has some talent, especially in Pro Bowler Darius Slay, but hasn't faced a challenge like this, since, well, Week 6 when they played Brady and the Bucs.

The GOAT threw for a pair of scores in that one — both of which came in the first quarter — and he likely would've had more had the game been closer. Sure, he won't have Chris Godwin or Antonio Brown in this one, but he'll still have Mike Evans. And he'll have Rob Gronkowski, who was out with an injury back in October. If the Eagles keep this one closer — and we expect they will — there's every reason to believe that Brady will be slinging it quite a bit, especially with the Eagles run defense looking much more intimidating in the second half of the season. The real question here becomes what happens when they get down in the red zone. Will they try to punch it in on the ground, or will they let Brady do what he does best?

Like the last one, this is the current number being offered over at FanDuel, and it seems a little low. Evans is averaging 64.7 yards per game this season, and now with the team being without Godwin, who still leads the Bucs in receiving, and Brown, who still leads the team in distractions, it's hard to see Evans finishing below that number. Sure, Slay will likely be following him all over the field, but Brady can fit throws into tight windows, and with limited options look for Evans to get a ton of targets. The only caveat here would be if the Bus got out to a big lead early and stopped throwing altogether. But since we've already said we don't see that happening...