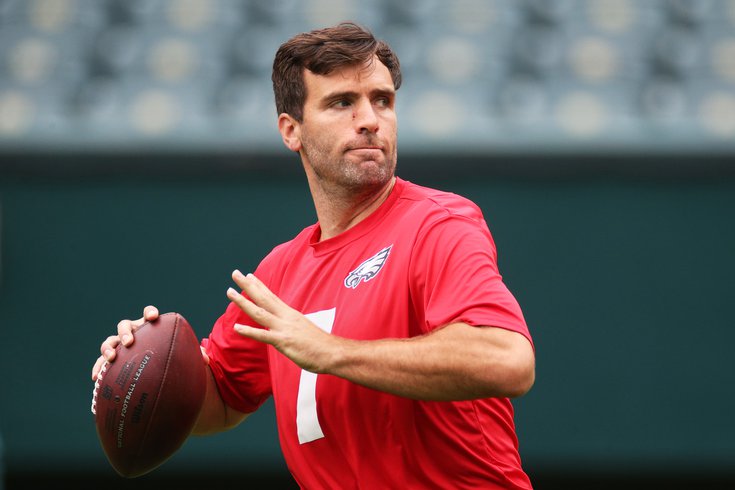 We haven't had an Eagles chat in a while, but we'll be getting back to those soon. For now, I solicited questions from my Twitter followers for a mailbag post, and as always, they came through.

Question from @JohnKincade: Do the Eagles understand that in a rebuilding year you are supposed to get younger and less experienced? I don’t get the thought process.

During the 2017 offseason, Howie Roseman and the Eagles had incredible success signing a bunch of older guys, mostly to cheap one-year deals, including Nick Foles (he was less cheap), Alshon Jeffery, Torrey Smith, LeGarrette Blount, Stefen Wisniewski, Chris Long, Patrick Robinson, and Corey Graham, who all helped contribute to the Super Bowl season.

They went back to the "old guy" well in 2018, when they added WR Golden Tate (trade), Mike Wallace, Paul Worrilow, Michael Bennett, and Haloti Ngata. Those guys didn't help quite as much, to put it mildly.

In 2019, once again, they acquired a bunch of old guys, including DeSean Jackson (trade), Richard Rodgers, Vinny Curry, Malik Jackson, and Andrew Sendejo. Those guys did nothing.

It is a strategy that worked amazingly one season, and then fell flat in the subsequent three seasons.

In 2021, Roseman is back it again, as he has signed the following older players to one-year deals:

If you look at each of those contracts individually, Flacco aside, they're bargains. Harris signed for $4 million, Kerrigan for $2.5 million, Nelson for $2.5 million, and Adams for under a million. The Eagles strangely gave Flacco a fully guaranteed deal worth $3.5 million.

In the aggregate, they added five older players, two of whom will almost certainly be starters, for $13.5 million. I could look at it one of two ways:

• Optimist view: Yes, while it would be ideal for a rebuilding team to add youth to the roster in free agency, younger players cost a hell of a lot more, and the Eagles had one of the worst cap situations in the NFL. They couldn't add those types of players. These "old guy bargain signings" make sense for a cap-strapped team that needed to fill out its roster.

• Pessimist view: Adding all these ineffective old guys every offseason since 2017 has contributed significantly to the erosion of the once long-term promise of the Super Bowl team, and they're still doing it.

In my opinion, it's a little of both. While the signings make sense in the context of this specifically cap-challenging offseason, it's worrisome that the front office has not recognized that they caught lightning in a bottle for one offseason signing a bunch of old dudes, but has otherwise been a roster building strategy that has produced very bad results.

Question from Sam (via email): I have been thinking that the position groups on defense are all better going into camp this year than last, and many of the offense groups are as well. I would like to read your thinking particularly because you think the roster stinks.

I think you can look at any comparisons from this year's roster to last year's two different ways:

If it's option 1, well, they better be improved on that group. For example, Carson Wentz was the worst starting quarterback in the NFL, so the bar really couldn't be much lower.

If we're comparing them to expectations for this team this time last year, many were thinking of Wentz as a possible MVP candidate, after he dragged a bunch of practice squad guys to the playoffs at the end of the 2019 season. Daniel Jeremiah had Wentz as the No. 3 quarterback in the NFL this time last year!

If we were to do a side-by-side comparison of the starting roster now vs. what it looked like heading into training camp last year, it looks like this:

On paper, if we're forgetting what actually happened last year, the 2020 roster was much more promising.

If we're looking at it in terms of knowing the results of the 2020 season, I would say they look improved at WR, the right side of the offensive line, LB, and CB. However, they didn't add any impact players, and while the claim can be made that the Eagles selected DeVonta Smith in the draft and should benefit from the returns of Brandon Brooks and Lane Johnson, just about every other team in the NFL can also point to the addition of potential rookie contributors and quality starters returning from injury.

It's just not a strong roster, in my opinion.

Question from @Footba11Joe: Are the Eagles going to sign a bunch of guys from other teams after training camp cuts? Over/under 3 guys?

You're killing me with the over-under number that doesn't have a .5 attached to it. Come on, Footba11 Joe. I think 3 is a good bet.

Question from @comoncentz: Other than tackle, what's the most interesting battle to watch in camp?

It was CB2, until they signed Steven Nelson. Now I think the next best battle is who becomes the third wide receiver. Travis Fulgham is more talented than Greg Ward and should be able to win that job, but we'll see.

And then I think the safety position is one to watch. If Rodney McLeod isn't ready for the start of the season, one of K'Von Wallace, Marcus Epps, Andrew Adams, or one of the other young guys will have to start. Yes, I realize that's not very exciting.

And then there's the No. 2 quarterback job. I'll be curious to see if the Eagles give Nick Mullens a real chance of winning that job over Flacco.

Question from @ItsMikeDeegan: Who will be this year's Travis Fulgham, as in, an out of nowhere contributing piece that no one has penciled in?

If I may, I'm going to amend that question slightly, and substitute Alex Singleton in for Travis Fulgham, since Fulgham wasn't even on the team this time last year.

Of the players I profiled this offseason who didn't play much last year, the guy who I thought showed a little something was Shaun Bradley.

Question from @Calf__Daddy: What becomes of Greg Ward? I love his story, but he seems to be the odd-man out in terms of unique skill set. If he could develop some speed / contested catching / crispy routes, he’s golden. But by the looks of things, he’s primarily a possession guy with little in his tool bag.

He's an overachiever in that he has gotten the most out of his lack of size and explosiveness, and has made himself into a roster-worthy player who can play in the slot (making the catches he is supposed to make) and help out on special teams (he can actually field punts). He is not a player who should be starting in the NFL, and as you note, his ceiling is very limited, as he offers little in the way of down-the-field playmaking ability, explosive plays as a returner, or churning out yards after the catch.

Question from @sssetz: Is Miles Sanders the most underrated RB1 in the NFL? Seems like all are talking about him dropping passes, but his upside is huge and the entire team last year was a dumpling fire. Anyway, what’s the Kempy-analysis of Miles & does he have to prove anything this year?

Oh for sure he has something to prove this year. As you note, he dropped a lot of passes. He led the team, actually, which is hard to do if you're a running back. Also, his pass protection wasn't good, and he fumbled far too much. He must clean up those areas of his game, especially in a passing league.

That said, he was very good as a runner, and he showed during his rookie season that he can catch, pass protect, and hang onto the football. And as I've noted here plenty, he is not some player who thinks he's better than he is. He has shown to be realistic about his deficiencies, and worked to correct them. I'm confident that he can.

As far as being over- or under-rated, I think most have a pretty good handle on type of talent he has, and what he needs to do to become a more complete player.

Question from @KWallaceSZN: Which player’s development are you most excited to see?

Jalen Reagor is too talented to play the way that he did last season. I'm curious to see how much he has improved in a lot of areas where he should have been better as a rookie.

Question from @FanDm90: How many days until we pick third in the 2022 draft, and will Malik Willis still be on the board?

During the 2015 season, I profiled like a dozen or so quarterbacks set to come out for the 2016 NFL Draft, with Carson Wentz being among them, of course. It was a fun exercise, and I'm kinda looking forward to doing that again, you know, if they don't trade for Deshaun Watson.

Willis will be among the first guys I look at. Very fun player.

For the love of God and all things holy, under, please. 🙏

Question from @KitWor: At some point will the Eagles look at a 4th QB in camp?

Unless that guy is Watson, I think they'll just roll with the three.

Question from @DaveHarris73: Who do you think wins the Paul Turner training camp MVP award and how nuts does Eagles Twitter get when he gets cut because he’s no good?

I think either of the two big, athletic tight ends in Hakeem Butler and Tyree Jackson are good candidates.

Comment from @NoVaphilly: Asking me to ask questions is a violation of my HIPPA rights.

Question from @talonj13: With the amount of turnover on the Eagles beat this year, do you have plans to do another edition of the Eagles Beat Writer showdown?

But to answer your question, I think that was a one-time thing. I don't want to make an Anchorman 2, so to speak. The press box food rankings will be back, though.