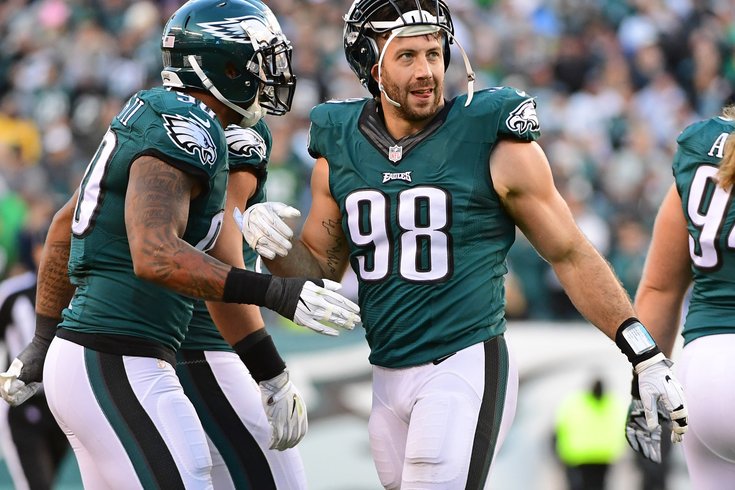 Former Eagles defensive end Connor Barwin, on right, announced the lineup for his Make the World Better benefit concert. It includes Future Islands, Strand of Oaks and Karl Blau, and Barwin also teased a 'special secret guest' performer will be added to the show.

Former Eagles linebacker and general philanthropist Connor Barwin took to Twitter on Thursday to announce (most of) the acts for his fifth annual Make The World Better Foundation benefit concert.

Indie synth-rockers Future Islands is the biggest name on the bill, and Strand of Oaks and Karl Blau will also perform. Barwin also teased a “special secret guest” performer, to be announced at a later date:

The show will take place Thursday, Sept. 5, at the Dell Music Center in Strawberry Mansion. Tickets go on sale Friday.

Barwin, of course, hasn’t played for the Eagles since 2016, spending his 2017 season with the Rams and his 2018 season with the Giants. The Cincinnati native turns 33 years old this fall, and his production has dropped off precipitously since his excellent 2014 Pro Bowl campaign — 14.5 sacks, two forced fumbles, 15 tackles for loss — with the Eagles.

But his absence from Philadelphia hasn’t stopped Barwin from continuing his charitable ways throughout the city. Just earlier this month, he appeared near Grays Ferry when the Make The World Better Foundation kicked off a new playground and recreation center build project at the Vare Recreation Center on the corner of Morris and 27th Streets:

Yesterday was special. ❤️ @mtwbfoundation officially kicked off our 4th project at Vare Rec Center. Feeling especially grateful for @jeffreytubbs.jt @cbonic19 and @kvtomczuk for their leadership and commitment to @mtwbfoundation and Philadelphia. Thank you to @phillymayor and @councilmankj for entrusting @mtwbfoundation with this incredible responsibility. We are honored and excited to partner with the Grays Ferry community to build the best rec center in the city! #TheNewVare #BuildTheBestPHL