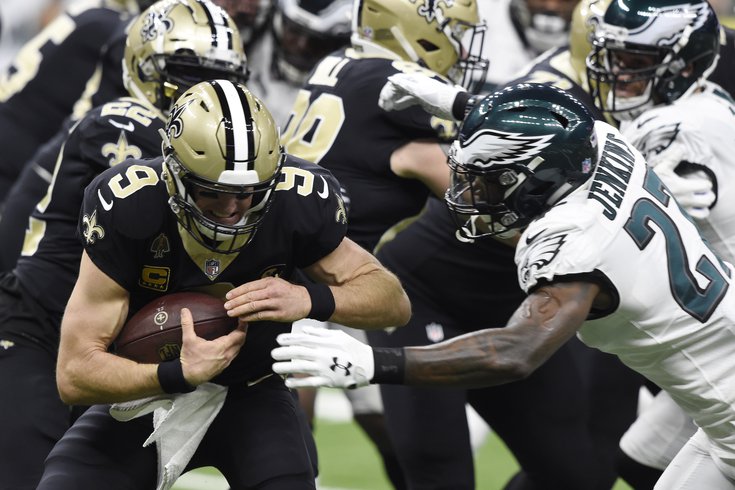 Malcolm Jenkins did not mince words when sharing his feelings over what Drew Brees had to say with regards to kneeling during the national anthem.

Former Philadelphia Eagles’ safety Malcolm Jenkins issued a strong rebuttal on Wednesday to his current teammate and New Orleans Saints’ quarterback Drew Brees over his comments regarding kneeling during the national anthem this upcoming NFL season.

"I considered you a friend," an emotional Jenkins said. "I looked up to you. You’re someone who I had a great deal of respect for. But sometimes you should shut the f—k up."

The video, which Jenkins posted on social media on Wednesday, has since been deleted from his accounts. But the clip can still be found on Twitter and watched below. (Warning: Video contains NSFW language.)

“I considered you a friend. I looked up to you. You’re someone I had a great deal of respect for.
But sometimes you should shut the f*** up”

Jenkins’ strong remarks came following an interview that Brees had with Yahoo! Finance earlier on Wednesday in which the Saints quarterback said that he “will never agree with anybody disrespecting the flag of the United States of America or our country.”

Brees said that the American flag and the national anthem remind him of his two grandfathers who fought during World War II, as well as those who fought for equal justice during the civil rights movement.

“Is everything right with our country right now? No, it’s not. We still have a long way to go,” Brees said. “But I think what you do by standing there and showing respect for the flag with your hand over your heart is it shows unity. It shows that we are all in this together. We can all do better, and that we are all part of the solution.”

Highlight: @readdanwrite asks @drewbrees what the star NFL quarterback thinks about "players kneeling again when the NFL season starts."@drewbrees: “I will never agree with anybody disrespecting the flag of the United States of America or our country.”

Brees’ response came after being asked about the possibility of NFL players kneeling again during the national anthem this upcoming season to bring attention to issues such as systemic racism and police brutality that have come under intense scrutiny in the wake of George Floyd’s death.

Floyd's death has sparked days of demonstrations and protests in cities across the United States drawing attention to problems in the country with police brutality and systemic racism. One of the many who has taken part in the peaceful protests across Philadelphia over the last few days has been Jenkins himself.

After removing the original video, Jenkins posted another video on both Twitter and Instagram responding to Brees’ comments. Jenkins said on Instagram that Brees called to explain his point of view, but did not reveal any other details of their conversation.

I recorded a few videos when thinking of how to respond to Drew Brees, I don’t take any of it back-I meant what I said-I removed the 1st video because I knew it be more about the headlines. I want people to understand how those of us struggling with what’s going on feel pic.twitter.com/T054qt0YEz

Whenever training camp for the 2020 NFL season begins, things could be fairly awkward between Jenkins and Brees in New Orleans. Jenkins, who was drafted by New Orleans in 2009 and played five seasons alongside Brees with the Saints, rejoined the team this offseason after a six-year run in Philadelphia.