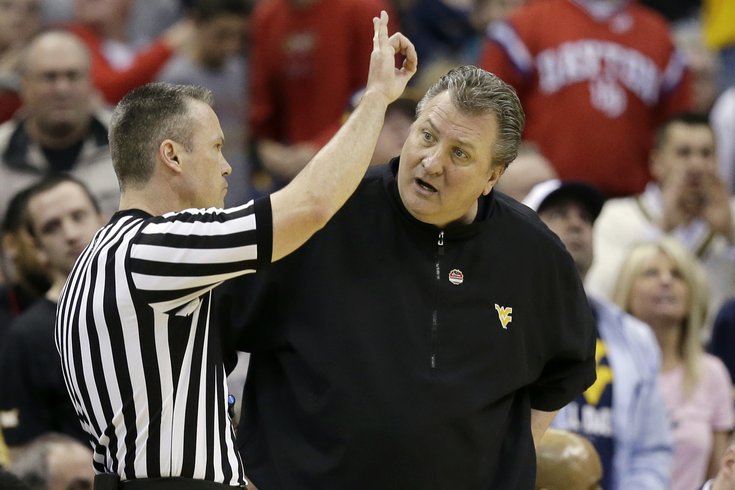 By the time the fourth game ended on Thursday, there were already two massive upsets -- No. 14-seeds UAB and Georgia St. beat three-seeds Iowa St. and Baylor -- and another near upset as No. 3 Notre Dame held off No. 14 Northeastern.

Perhaps they should have saved some madness.

Through the first seven games on Friday, there were no upsets. No buzzer beaters. Nothing like Thursday. But that didn't mean there wasn't enjoyable basketball. It just didn't match the frenzied pace of the day before.

I’m upset at the lack of upsets.

No. 4 Louisville sneaks past No. 13 UC Irvine

In what was the best early game of the day, the 13-seed Anteaters of UC Irvine gave Rick Pitino and his Louisville squad all they could handle.

With a minute left in the game, Irvine took a two point lead that was quickly erased by Louisville's Ronald Blackshear. Then, with 8.9 seconds remaining, Quentin Snider hit a pair of clutch free throws to give the Cardinals a two point lead.

But like Northeastern on Thursday, Irvine failed to get a shot off on the final possession.

The star of the game was Irvine's big man -- 7-foot-6 sophomore Mamadou Ndiaye of Senegal. You may remember him from this video, in which he destroys helpless high school kids.

As expected, he became an almost immediate Twitter favorite:

No. 13 UC Irvine up early on No. 4 Louisville, 19-16. Mamadou Ndiaye leads the Anteaters with 4 points. #MarchMadness pic.twitter.com/Zgdae0Kt6N

I mean, he doesn't even have to jump to dunk:

And he slaps the floor.

I'll miss watching him the rest of the tournament. Louisville, the team that actually won, will face Northern Iowa on Sunday.

Look out for Michigan State. They've got a really good point guard, an offensively gifted big and can run the floor with the best of them. They also have Tom Izzo, who always seems to have his team ready to go in March, despite how they've played the rest of the season.

It certainly wasn't an easy victory, as Georgia continually chipped away at the Spartans' lead. However, it seemed like Michigan State had an answer every time. Often, it was in the form of Travis Trice. Watch what he does to four Georgia defenders:

Trice had 15 points for the Spartans, who had four players score 14 points or more. They'll face No. 2 Virginia on Sunday.

No. 5 West Virginia too much for No. 12 Buffalo

This photo pretty much sums up Bob Huggins' afternoon:

Safe to say Bob Huggins doesn’t wear a toupee based on the way he’s pulling his hair out here. http://t.co/H3FdAY6wA6 pic.twitter.com/IH2Fj17XZq

And yes, that's the look of the winning coach. Despite early foul trouble and a late charge from Buffalo, the Mountaineers were able to hold off the Bulls, 68-62.

Sidenote: There's a player on West Virginia named BillyDee Williams. No, not that Billy Dee Williams...

WVU should automatically advance for having a player named BillyDee Williams. pic.twitter.com/l7740OjkUi

No. 5 Northern Iowa holds off No. 12 Wyoming

The Panthers raced out to an early lead against Wyoming, but that didn't prevent the game from being in doubt midway through the second half. With 10:35 left in the game, Charles Hankerson Jr. hit a three-pointer to cut UNI's lead to seven, 50-43, and cap off an 18-4 run by Wyoming.

It looked like the Cowboys might make it a game, but it didn't last for long. Norther Iowa's Paul Jesperson answered with a three of his own 20 seconds later to extend the lead back to 10 points.

That's when Wes Washpun took over. He had eight of his team's next 11 points to help push the lead back out to 14 points, as the Panthers coasted to a 71-54 win.

They also had their most famous alum in attendance:

He even gave the team a pep talk on Thursday night:

No. 2 Virginia escapes No. 15 Belmont

The final score of 79-67 won't do this game justice. It was much closer than that, with Belmont hanging with the ACC regular season champs until the game's final minutes.

As it often is with almost-upsets, a player from the losing team is the one that makes the lasting impression (see Louisville-UC Irvine). In this one, it was Belmont's Craig Bradshaw, who had a game-high 25 points, including 5-for-9 on three-point shots.

He hit back-to-back threes late in the second half to cut Virginia's lead to 62-60 with 4:36 to play. The first of them was a bank, and believe it or not, Bradshaw called it. At least that's what he claimed immediately after sinking the shot.

After the game, he was asked about the shot. This, from FOXSports.com:

So the real controversy becomes, of course, did Bradshaw actually call bank? His head coach Rick Byrd thinks so, and said so unsolicited after the game: "That bank shot, honestly, he does it all the time. I'm not going to make him say for sure, but I'm about 90 percent sure he meant to bank that -- truthfully."

Bradshaw confirmed: "I did call bank. I do it a lot in practice, kind of joking around. But tonight, that felt like that was the better choice than just swishing it."

Who cares if he called it. That's awesome.

The most boring and predictable game of the day so far was also the first. It featured No. 2 Kansas and No. 15 New Mexico State. After a rough day for the Big 12 on Thursday -- Baylor, Iowa State and Texas all lost -- the Jayhawks were never in danger of being upset, but they did get off to a bit of a rough start:

Not that it mattered. They cruised to a 75-56 win and will face the winner of Wichita State and Indiana.

Get live updates and analysis from full slate of 16 NCAA Tournament games on Thursday. For an updated bracket, click here.