‘Nova handles Lafayette, and three myths about the upcoming matchup with NC State 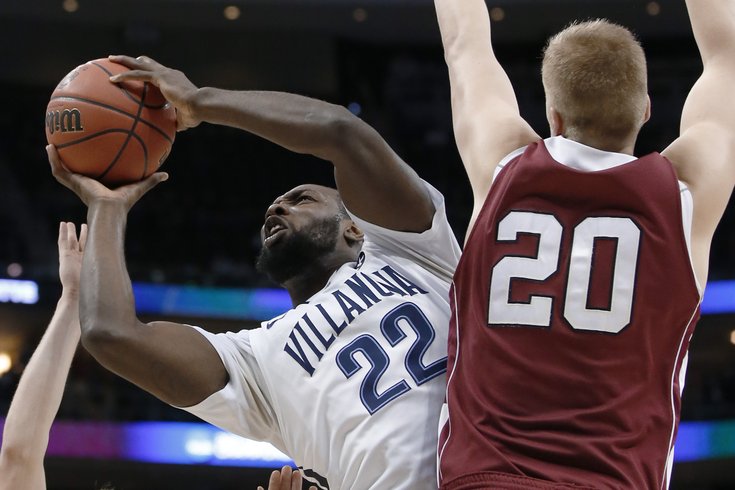 Villanova's Alan Flannigan (22) shoots past Lafayette's Dan Trist (20) during the first half of an NCAA Tournament game Thursday in Pittsburgh.

On the surface, it might seem a little odd to be mentioning that school on City Line Avenue while Villanova carries the Big Five flag into the tournament all on its lonesome. Ironically enough, Villanova’s 93-52 thrashing of nearby Lafayette reminded me of Saint Joseph’s, specifically this game from almost 11 years ago to the day (via Sports Reference): 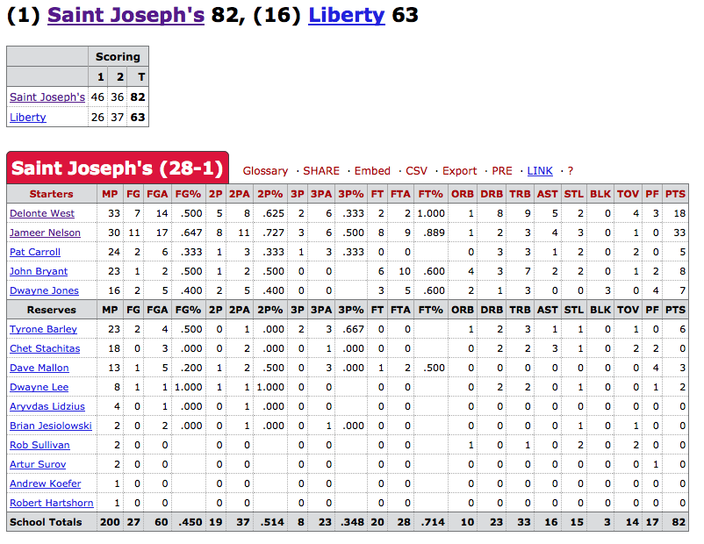 If you just glanced at the final score, there would seem to be a not-so-subtle difference between 21-point and 41-point wins. There really isn’t. Saint Joe’s kicked butt and took names that day, jumping on Liberty from the opening tip, showcasing a different level of athleticism and higher skill level that combined to form a different class of basketball. Watching the Hawks dismantle their overmatched opponent on that day, they truly felt like a one seed.

As 41-point wins go, this one was a pleasant surprise. Jay Wright’s team usually becomes familiar with the Patriot League in its nonconference schedule, and their results from earlier this season (11-point win over Lehigh, 7-point victory over Bucknell where they trailed in the final two minutes) didn’t indicate a walk in the park was forthcoming. As things turned out, the familiarity almost definitely worked out in the Wildcats’ favor.

"It was easy to get the players ready for this," Wright told Mike Kern of the Daily News. "We played them last season [in the opener]. And were losing in the second half on our court. Now we're on a neutral court. So we weren't playing someone we'd never seen. I didn't have to bring up any other examples [of what could happen].”

Doesn’t it seem like that type of blowout places such a brighter outlook on the rest of the tournament for ‘Nova? In 2006, it felt like the Wildcats were running uphill for the duration of their run to the Elite Eight after an unconvincing 13-point win over Monmouth in the 1-16 game. I can’t imagine they’ll lose because of nerves or the wrong mindset the rest of the way.

Villanova will get a major step-up in competition when it faces NC State on Saturday night in Pittsburgh. The Wolfpack have collected some pretty impressive scalps on the season, specifically Duke, North Carolina, and Louisville. They also have 13 losses, including ones to Boston College, Wofford, and Wake Forest. NC State seems like a classic example of a boom-or-bust team, which can be terrifying to play against in a single-elimination tournament. I’ve admittedly barely seen them play one or two times this year outside of their ferocious comeback (or LSU collapse, depending on how you look at things) last night.

I would like to correct what I believe are a couple of myths heading into that matchup. If there’s a little bit of a strawman element to the format, please forgive me. Try to think of the myths as a way to organize my thoughts.

MYTH #1: IF NC STATE WINS, IT’S BECAUSE IT'S A BAD MATCHUP FOR VILLANOVA – If I have to hear one more pundit exclaim that the NCAA Tournament “is all about matchups,” my head might actually explode. Congratulations, you just offered a generality that is literally true in pretty much every single team sport. For whatever reason, most people only view matchups as a one-way street, a way to explain a lower-seeded team toppling a favorite. It may be hard to believe, but NC State also has to deal with what ‘Nova brings to the table. We analyze college hoops as if the higher seeds approach entire games from a defensive perspective a disproportionate amount of time.

This all isn’t to say NC State can’t win. On the contrary, I have to think it feels pretty good about itself after advancing from a game that their three-headed backcourt shot 4-21 from beyond the arc in. No matter how well ‘Nova defends, it’s unlikely that Cat Barber, Trevor Lacey, and Ralston Turner shoot so poorly again.

The tourney is a one-game shot, and sometimes worse teams play better during those all-important 40 minutes. This sport can be stupid in that way. NC State beat Duke at home by double digits and then got shellacked by the Blue Devils in the ACC Tournament. Did the Wolfpack suddenly become a worse matchup overnight? I don’t believe so. The same goes for ‘Nova and Georgetown, as well.

MYTH #2: IF NC STATE WINS, IT’S NOT REALLY MUCH OF AN UPSET – The Wolfpack have become a trendy pick, and I’m not exactly sure why. According to Team Rankings, the Wildcats have a 79 percent chance to win. Ken Pomeroy, whose site is basically my bible during the Big Dance, is even more bullish on Nova’s odds to advance, placing them at 85 percent. It’s not like NC State jumped off the screen against LSU, either.

Again, Mark Gottfried’s team can certainly come out on top, but they’re a little bit worse than Villanova offensively and much worse defensively. If the Wolfpack advance, there’s no doubt that it will come as a surprise.

MYTH #3: THERE’S AN ADDED SIGNIFICANCE TO THIS GAME BECAUSE VILLANOVA HASN’T PLAYED ON THE SECOND WEEKEND SINCE 2009 – Not all second-round (or third, sigh) defeats are created equal. The 2010 exit at the hands of St. Mary’s wasn’t a very good look for Wright and Co., but last year’s loss to UConn isn’t one the program should be ashamed of at all. The Wildcats got beat by a team that bulldozed through the rest of the field! ‘Nova just happened to play UConn earlier than everyone else.