Gonzaga and Wisconsin advance to the Sweet 16 on Sunday night 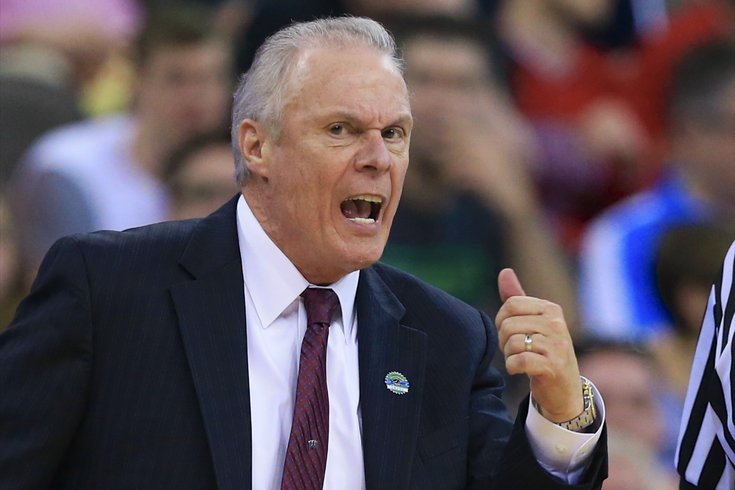 Chester's Bo Ryan has his Badgers back in the Sweet 16.

If we're being honest, I'm a little bit NCAA'd out after suffering from four full days of basketball overload... and that's coming from someone who unironically wore a "Ball is Life" tee at one point of his life. Don't get me wrong, I enjoy college hoops as much as the next guy, but let's just say the upcoming three-day break comes at a very opportune time. Regardless of any fatigue, they pay me the big bucks for a reason. Let's power through these last four games of the Round of 32.

Player of the Game: Kyle Wiltjer, who shot 10-12 from the field and 4-6 from beyond the arc for his 24 points, is a player with an interesting backstory who I was already familiar with. Basically, the sweet-shooting 6-foot-10 forward already has been a rotation member of a title team, the 7th man on the loaded Anthony Davis/Michael Kidd-Gilchrist 2012 Kentucky squad. After a solid but unspectacular sophomore year in 2012-13, John Calipari brought in a Family Value Meal full of McDonald's All-Americans, and it became clear that Wiltjer's playing time could actually decrease as an upperclassmen. What a world we live in. He decided to transfer to Gonzaga, primarily because it allowed him a redshirt year to work on his body. If you're interested in the full story, check out this recommended in-depth profile on Grantland from a month ago.

I have a couple of thoughts about Wiltjer. First, can you imagine if he stayed in Lexington like Cal wanted him to? Wiltjer is the best player on a two seed and he'd probably come of the bench for Kentucky. That's insane. Second, his ability to play stretch four allows the Zags to play college hoops' version of "the beautiful game." Shooting, cutting, passing, dunking, post-ups, pick-and-rolls, etc. Gonzaga can do all of these things, and they can do all of them well. NBA snobs should check these guys out. They carved apart an Iowa team that looked like a juggernaut in their first-round victory:

Philly Connection? Yep, Iowa head coach Fran McCaffrey, who went to La Salle High and played some of his college ball at Penn. This was a successful year for McCaffery and the Hawkeyes, who won the school's first tourney game in 14 years, but all the coach could do was this against Gonzaga:

"I'm telling you, that muskie was at LEAST this big" - Fran McCaffery pic.twitter.com/pL6f7IXmVq

Who do they have next? UCLA, which defeated Gonzaga in a pretty famous Sweet 16 game nine years ago. The whole Adam Morrison thing seems like a long time ago, but Gus Johnson has fortunately stood the test of time. I had no idea Luc Richard Mbah a Moute made the game-winning layup:

You will see Adam Morrison crying about 4,500 times between now and Friday night. Gonzaga-UCLA S16 rematch is on.

No. 1 Wisconsin holds off No. 8 Oregon

Player of the Game: Sam Dekker hit some clutch shots for the Badgers, but Frank Kaminsky made some huge defensive plays during winning time to secure a 72-65 win for which top-seeded Wisconsin had to sweat big time. Particularly, he contested a couple of key Duck drives at the rim to ensure the win for the Badgers. One Oregon drive that Frank the Tank wasn't able to stop ended quite badly, though:

If Kaminsky sticks in the NBA, which I think he's skilled enough to do, that is definitely going to happen a few times. It sounds obvious, but even great shot-blockers get dunked on a few times. Credit Kaminsky for continuing to challenge Oregon drivers at the end of the game that saw both teams continually punch and counter-punch.

Philly Connection? Wisconsin coach and Chester native Bo Ryan, who moves onto the Sweet 16. Here's some low-quality video of Bo celebrating after the game:

Who do they have next? North Carolina! In boxing, there's a saying that styles make fights, and this would be a huge clash of tempo. UNC, who plays at the 12th-fastest tempo in the country, wants a track meet where both teams are running up-and-down the floor. Wisconsin, who plays at the 346th-fastest tempo, wants to out-execute their opponent in the halfcourt.

No. 5 West Virgina races past No. 4 Maryland

Player of the Game: West Virginia's press. It's a bit of a cop out, sure, but Bob Huggins' team forces more turnovers than any other team in the nation, and that is precisely why they'll play another game on Thursday night. In total, Maryland coughed up the ball 23 times. Dez Wells had eight of them all all by himself. HUGGY BEAR'S PRESS IS AWESOME BABY!

The Mountaineers ended up winning the game, 69-59, and they completely controlled the tempo.

Philly Connection? Not a one, unless you count Billy Hahn's controversial tenure at La Salle. Instead, I'd like to use this section to point out that Huggins has been on fire in his press conferences lately. When asked about why he opts to wear a pullover, this was his answer (via Fox Sports Ohio):

"I'm at the point in my life now, I'm on the downhill," Huggins said. "I've been doing this a long, long time and I'm going to be comfortable, you know? I did wear a suit for a little while this year, just because I don't like people to think they have me figured out. But that's the only reason."

Who do they have next? Kentucky. Godspeed.

Player of the Game: Terry Rozier. The quick guard wreaked havoc on the Panthers' defense by living in the paint, finishing with 25 points (on 13 shots) and seven assists (to only two turnovers) as the Cardinals relatively sailed to a 66-53 victory. He also threw a pretty sweet alley-oop to Montrezl Harrell at a key juncture of the game:

Philly Connection? Nada. I really believe that Northern Iowa is missing a huge opportunity by looking past the Delaware Valley in recruiting. Geographically, it's a no-brainer.

Who do they have next? North Carolina State, in a suddenly wide-open East Regional. Man, that Villanova loss still really sticks out as huge missed opportunity one day later.