With Marcus Smith out, Eagles will again be thin at linebacker 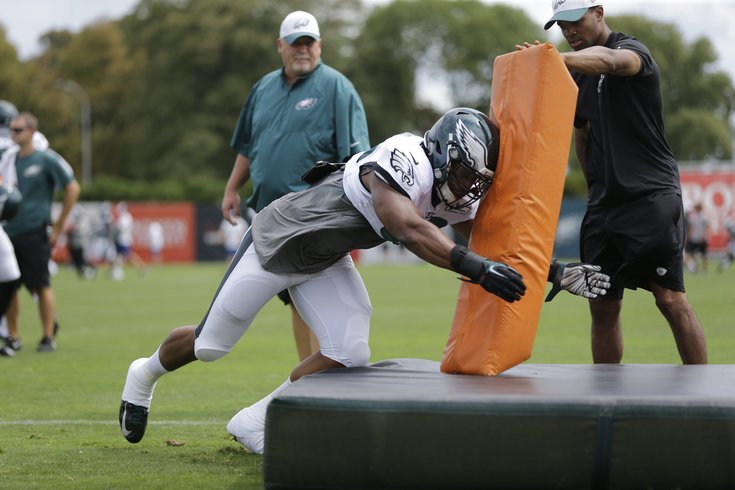 Marcus Smith was hoping to turn some heads this season and improve on a rookie campaign in which he failed to make a tackle during limited action in the eight games. But on Thursday, that plan was put on hold after the second-year player was carted off the field with a hamstring injury suffered during the Eagles' joint practice with the Baltimore Ravens.

A day later, the former Louisville linebacker said that he would be out for two to three weeks, but expects to be ready when the Eagles open the regular season against the Falcons in Atlanta.

Marcus Smith said he'll be out 2-3 weeks and expects to be back before the season. #Eagles

Prior to Friday's practice, defensive coordinator Billy Davis wouldn't give a timeline for Smith's return -- he said the team doesn't yet know the severity of the injury -- but did talk about how the injury could impact for the second-year player's psyche.

"I’m glad it wasn’t anything major, but it’s still something that keeps him out," Davis. "It’s disappointing, probably to him more than anybody. He was really taking some growth steps and coming along, and now he’s got a setback."

Just last week, Davis was praising Smith's improvement year-over-year, which is probably why he used the term "setback."

"Oh, he's way ahead of where he was [last year]," Davis said prior to the first preseason game against the Colts. "I think the biggest thing that changes from a rookie year, especially when you end up in that first-round-draft-pick-pressure mode, the confidence level and the pressure you put on yourself and others are putting on you, kind of calms a little bit or you actually have some coping skills to where you can handle it and still function and play and put your focus on the football part.

"I think Marcus has got his focus on the football part and controlling what he can control and he's in a much better place. He's playing faster. He's reacting faster. He's seeing the field better and those are all indications that he's really taking some big leaps forward."

Smith, who had just one tackle and one pass defended in the first preseason game against the Colts, was looking to be the team's No. 3 outside linebacker this season. He was originally competing with Travis Long for that job until Long tore his ACL just a few days into training camp.

In Smith's absence, you'll likely see more of pass rush specialist Vinny Curry at OLB. The team had already been working him out on the edge, but was hesitant to have him drop into coverage. As Jimmy Kempski noted after Thursday's practice, Curry didn't look all that bad in coverage.

"We’ll accelerate Vinny’s move out there now because of the depth," Davis said. "We’re excited and Vinny’s excited about seeing him out there. We’ve worked all the offseason, and we’ve slowly leaked him in. The last couple of weeks he’s gotten more and more, and this week, we’ll give him a lot. And in the game, we’ll give him some."

The Eagles could also turn to Bryan Braman, a special teams standout who has been slotted in as the fourth OLB behind Smith. He recently spoke to Paul Domowitch of the Daily News about getting his shot:

With Smith out, special teams ace Bryan Braman now is the third outside linebacker behind Graham and Connor. Braman played just nine defensive snaps for the Eagles last year and has played a total of 109 defensive snaps in four NFL seasons. He has half a sack.

"The coaches prepare you for this," Braman said. "Next man up. You've got to be prepared and ready to go. Make sure you're in your playbook and know what you're doing.

"All I can do is come out here and work hard and show them that the plays I make in the special teams phase of the game will roll over into the defensive phase of things." [philly.com]

And as we've seen in practice, ILBs Brad Jones and Emmanuel Acho could also see added time on the outside.

When talking about Smith's progression last week, Davis commented about how playing both inside and outside linebacker -- Davis still believes Smith's a true OLB -- can help a player become more aware of the defense's overall scheme. Here's his quote:

It just makes us stronger. It actually gives the linebacker himself a much broader understanding of the defense because those guys inside are our quarterbacks. The guys outside listen to calls. The guys inside make calls. And when you have to make the calls, then you move to a position of listening, you have a much better understanding of why and what is about to be called.

But their time there could be limited, as the Eagles' ILB depth is currently in worse shape than it is at OLB.

The top three at that position -- Kiko Alonso (concussion), DeMeco Ryans (Achilles) and Mychal Kendricks (mystery ailment) -- all sat out the first game, and there's no guarantee they play on Saturday night. Davis said that if those three see the field against the Ravens, it won't be for long. All three, however, were out on the field for Friday's walkthrough.

For context, here's a look at the snap counts for the linebackers from Game 1 against the Colts, via BleedingGreenNation.com:

And for good measure ... Vinny Curry was in for just eight (10%) snaps, but only as a down lineman.

Don't expect Barwin and Graham to see a ton more action out there Saturday night, which means at least 50 percent of the team's defensive snaps at one OLB spot will need to be accounted for. Curry will likely get some, but not the lion's share. That means Acho and Jones will spend some time on the outside, freeing up snaps for rookie third-round pick Jordan Hicks on the inside.

If you're going to put a positive spin on the current of the linebackers, that would be it -- more time for young players to show something while the games don't actually matter. That, and the fact that Ryans, Alonso and Kendricks all figure to be healthy for the start of the season.

• WR Miles Austin did not practice Friday. His status for Saturday night is unknown.

• S Earl Wolff was not out at practice again on Friday. Chip Kelly said on Thursday that Wolff was seeing a doctor about his oft-injured knee.