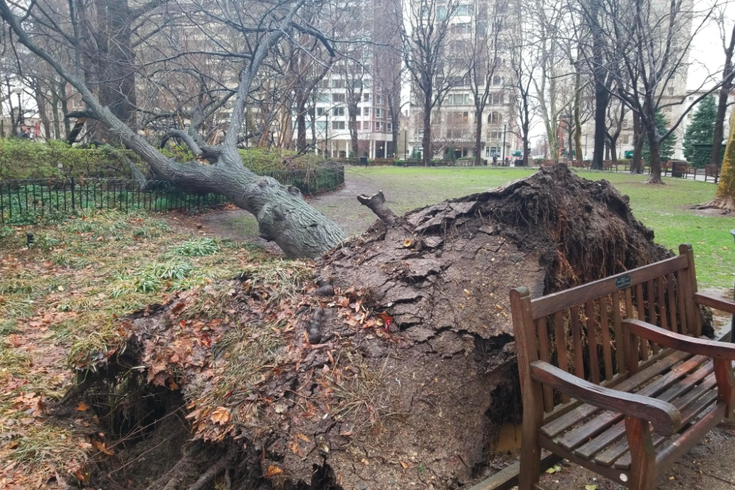 A wet and windy morning claimed a mighty casualty at Rittenhouse Square on Friday when a massive, 50-foot tall linden tree was uprooted and thrown to the park grounds.

The tree's collapse was first pointed out a by a user on the Philadelphia subreddit, who posted a photo displaying a gigantic mound of soil and roots ripped up from the ground behind a bench.

"Mother Nature took its toll," said Renee Dubyk, president of the non-profit Friends of Rittenhouse Square, which works with the city to oversee and maintain the park.

Fortunately, given the inclement weather, nobody was injured at the sparsely traveled park on Friday morning.

The incident comes just a few weeks after a 75-foot-tall oak tree was removed from Rittenhouse Square due to safety concerns, ending a decades-long run at the park. Dubyk said then that one of that tree's main roots may have been cut during a sidewalk repair a few years ago. By the time it was removed, it was clear the tree was on life support, she said.

This time around, the culprit seems to bet the weather — a combination of high winds and a month of heavy precipitation. Northwest winds on Friday were forecast between 25-40 mph, with gusts reaching up to 50 or 60 mph by midday. 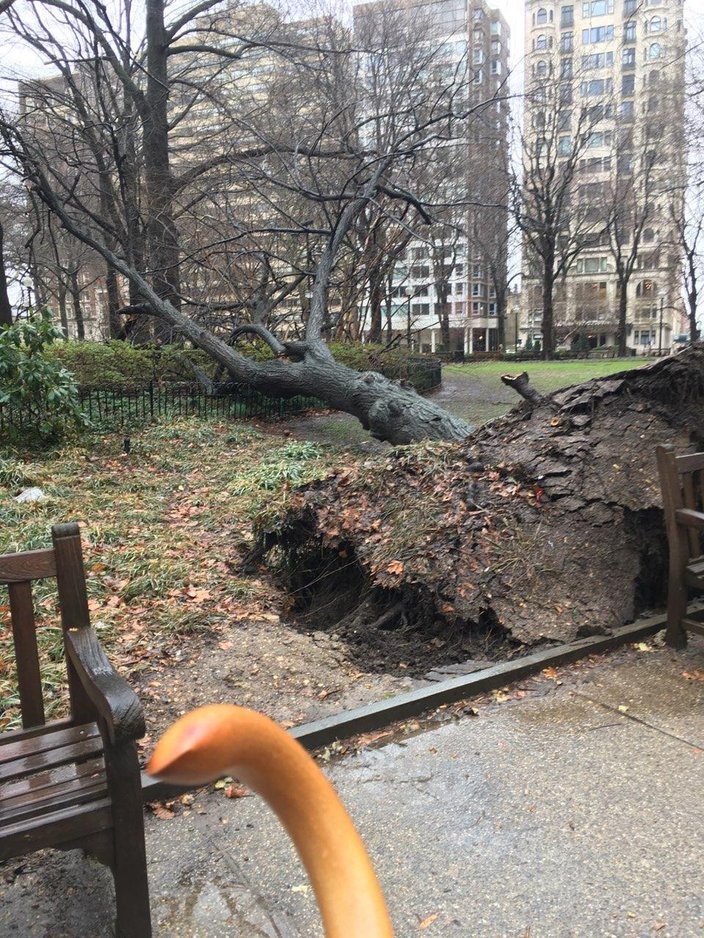 "We've done full tree assessments to look at all trees in the park," Dubyk said. "The last one was completed last summer. There's ongoing review and work being done both by our organization and the city."


Dubyk said she was confident Friday's incident had nothing to do with a lack of care by her organization or the city. Records did not provide an approximate age for the linden tree that fell Friday morning.

"It's just something that happened," said Dubyk, who encouraged all who care about the iconic park to join the Friends of Rittenhouse Square.

City officials said the fallen linden tree, which isn't blocking any pedestrian traffic, will be removed another day when it can be accessed more safely.

There have been reports of several other fallen trees in the region — including one that came down on the Schuylkill Expressway westbound near Gladwynne — that required more immediate attention on Friday. Traffic cameras showed that tree landed on a SEPTA bus. It appears to have closed I-76 West, but further information was not immediately available.

Many of the trees at Rittenhouse Square date back more than 100 years, when Paul Philippe Cret gave the park its last major overhaul and planted trees along the walkways extending from the central oval terrace.