Mauve stingers are usually found in tropical waters, but they've recently been spotted in Sandy Hook and some beaches further south in the state 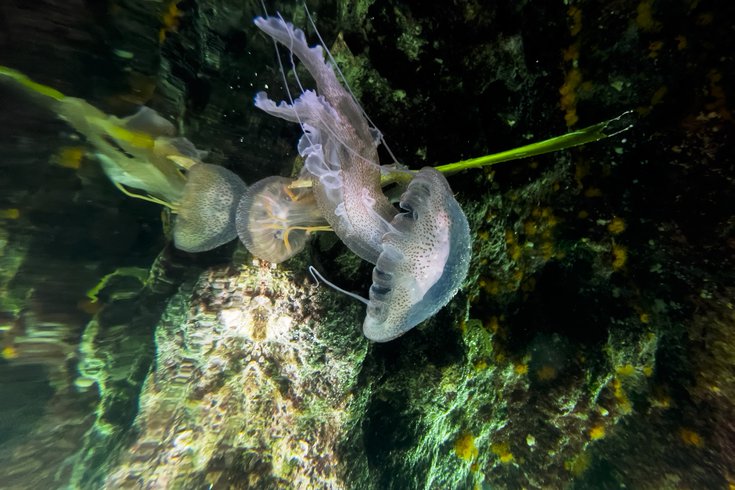 Mauve Stinger jellyfish have made their way to New Jersey beach. A mother and her family saw at least a dozen of the rare species. These jellyfish are mostly found in tropical waters and are known to pack a powerful sting. This is a file photo of a Mauve Stinger taken in Malta and not the jellyfish in New Jersey.

A family beach day at the Jersey Shore turned into a marine biology lesson for one mother this week when a rare species of jellyfish floated nearby in the water.

Maggie McGuire was at Sea Watch Beach in Manasquan with her kids on Monday when they saw a small purple jellyfish speckled with dots. She told NJ.com that the ocean was full of them, so she scooped one into a bucket to get a closer look and take pictures.

After a quick search online, she found a Facebook group called New Jersey JellySpotters and shared her photos. Paul Bologna, director of marine biology and coastal sciences at Montclair State University, commented on the post, telling her the jellyfish was a mauve stinger.

Mauve stingers, or Pelagia noctiluca, is a species typically found in tropical waters around the world. Unlike most jellyfish which carry stinging cells in their tentacles, mauve stingers have stinging cells covering their entire bodies – including their mouths, arms and tentacles. They are known to deliver a painful sting, which can leave an itchy rash on the swimmers who have the misfortune of encountering them.

Although their presence is unusual in New Jersey, Bologna said thousands of the jellyfish have gathered along the coastline within the past couple of weeks. He told NJ.com that he had seen mauve stingers just twice in the last 15 years, but the reason they are currently invading the ocean off the state's coast is unclear.

Bologna cited a few possibilities, including the lack of rain, an upwelling – which is when cooler water rises to the surface – or the tides could just be pulling them closer to shore.

"They've been found up and down," Liza Baskin, an instructor at the Marine Academy of Science and Technology in Highlands, New Jersey, told News12. "We have reports from Sandy Hook all the way down past Ocean County and really large numbers and a lot of people getting stung."

Ms Baskin talks about the Mauve Stinger jellyfish on the news. Have you seen one? pic.twitter.com/mFXxI8hE2Z

If you happen to be swimming at the Jersey Shore over Labor Day weekend and get stung by a mauve stinger, there are a few ways to treat it. Washing the inflicted area with a combination of baking soda and seawater can help, as well as using white vinegar. Ice packs wrapped in a towel also can ease the pain.