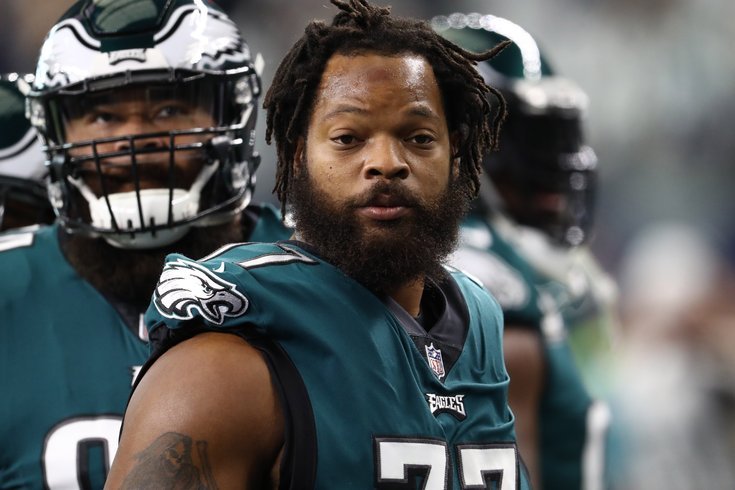 Former Philadelphia Eagles defensive end Michael Bennett, who was traded to the Patriots during the offseason, has been suspended for a game due to conduct detrimental to the team.

New England Patriots defensive end Michael Bennett has been suspended by the team for one game after he reportedly got into a shouting match with coaches.

Bennett spent last season in Philadelphia and finished second on the team in sacks, with nine on the season. Some fans were confused by the Eagles' decision to trade Bennett to New England for a fifth round pick in the offseason, particularly considering the anticipated retirement of Chris Long.

Per Nick Underhill of The Athletic, Bennett was suspended by the Patriots for conduct detrimental to the team. He was reportedly unhappy with his role on the defense. The Patriots are 6-0.

Michael Bennett has been suspended a game for conduct detrimental, per source. He let the coaching staff know he was not pleased with his role.

Bennett later released the following statement apologizing to his teammates.

Just spoke with #Pats DE Michael Bennett, who provided this statement to ESPN re his one-week suspension: “On Friday, I had a philosophical disagreement with my position coach that has led to my suspension. I apologize to my teammates for any distraction this may have caused.”

Bennett was under heavy scrutiny not long after he arrived in Philadelphia. Texas prosecutors belatedly charged him with pushing the arm of a paraplegic security guard after the Patriots, where his brother played at the time, won the Super Bowl in Houston in 2017. Those charges were later dropped.

Many thought Bennett was unjustly targeted in that case, possibly as a way for law enforcement to retaliate against him for claiming he was racially profiled in a separate incident in Las Vegas. Video had surfaced of a tense encounter with police, who said they were searching for a suspect in a shooting that Bennett had no connection with whatsoever.

While nothing came to the surface last season during Bennett's time with the Eagles, the decision to move on from him and ship him to a perennial Super Bowl contender seemed odd. The Eagles have struggled in the early part of this season to generate consistent pressure on opposing quarterbacks.

Bennett's suspension comes a day after the Eagles released linebacker Zach Brown, who had made disparaging remarks about Vikings quarterback Kirk Cousins ahead of last Sunday's game. Cousins torched the Eagles defense in a 38-20 win.

While the Eagles still need help on defense, their decision not to keep Bennett around may have been a wise one.