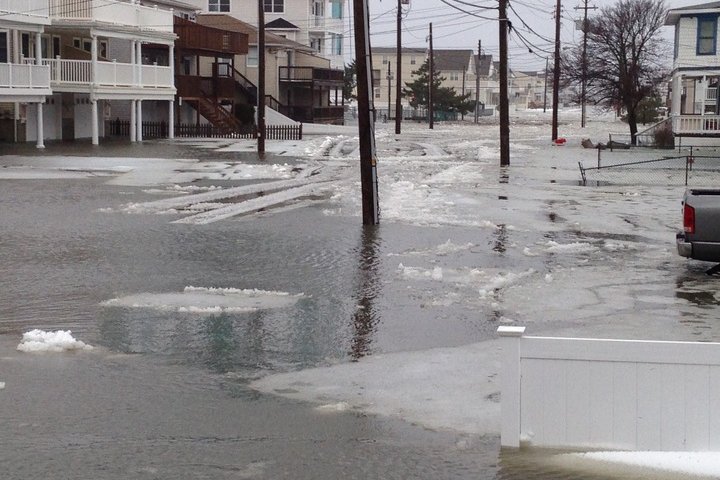 After record tidal flooding this morning in Cape May and Lewes, Delaware, high tide came and went again at the Jersey Shore on Saturday night.

The imminent tide, apparently the lower of the two daily tides, continued to produce widespread moderate to major flooding at the Shore points. Indeed, photos on social media showed the streets of Sea Isle City flooding again about an hour after high tide.

Wind gusts are expected to fall below 25 knots, forecasters said, though wave heights on the ocean are likely to remain in the 4-to-6-foot range.

The tide this morning in Cape May, measured at 8.65 feet, equaled or just surpassed the record set by Hurricane Sandy or the Storm of 1962, the National Weather Service said.

Saturday night's high tide, and another at 8 a.m. Sunday morning, were expected to continue to trap water along the coast, in the back bays and estuaries.

The snowstorm also combined with high tide, causing widespread flooding in numerous Jersey Shore towns, including some of the worst flooding ever seen in Ocean City. Images shared on social media showed main thoroughfares in Sea Isle City and Margate under water.

Frank Becktel, an Atlantic City jitney driver, said the streets near him at New Hampshire and Atlantic Avenues had flooded by 7:15 a.m. It subsided by the afternoon, with his street dry, but he was still worried about the next two tides.

The Saturday morning high tide was 7.88 feet above mean low water in Atlantic City, just below the 8 feet level where major flooding starts.

"Access to all causeways leading to the island is blocked on Saturday morning. City officials are urging residents to stay off the roads and not drive through flood waters," he added.

The National Weather Service has issued a coastal flood warning and a winter storm watch for the coast through Sunday morning.

Meanwhile many residents are coping with the loss of power.

One of them is Jeanne Donohue of Dennis Township, just inland from Sea Isle City.

"Our power blinked off for good about 5:30 a.m. before I had a chance to make coffee, so I am not a happy camper. We have a kerosene heater, but no running water," she said.

"Wind gusts seem to be fewer and farther between, but still strong. It is sleeting now with a strong chance of grumpy teenagers, surviving with no Internet! "

"Right now I am sitting in my car charging my phone," she added.

One variable predicts some good fortune for the shore.

Some of the precipitation along the shore will fall as rain, not snow, keeping accumulation totals down on barrier islands and bayside communities.

Becktel said water, not snow, is the issue in Atlantic City.

In Linwood, which faces across the bay to Margate, Caren Fitzpatrick said this is the highest tide she's seen. Her home sits just off the salt marsh.

In the small bayside town of Port Republic, which faces Brigantine across the bay, Susan Allen woke up to the sounds of a fire whistle and strong wind gusts. She had 6 to 7 inches on the ground, but the precipitation had turned to sleet.

The peak tide in Ocean City was 8.04 feet above mean low water at about 7:20 a.m., measured at the Bayside Center in Ocean City.

By comparison, Sandy was  10.02 feet in Ocean City and the November 2009 nor'easter that leveled the city's north end dunes came in at 8.02 feet.