SEPTA working to restore service but sees delays ahead

Snow drifts covering train tracks in many areas have to be cleared, the transit agency said 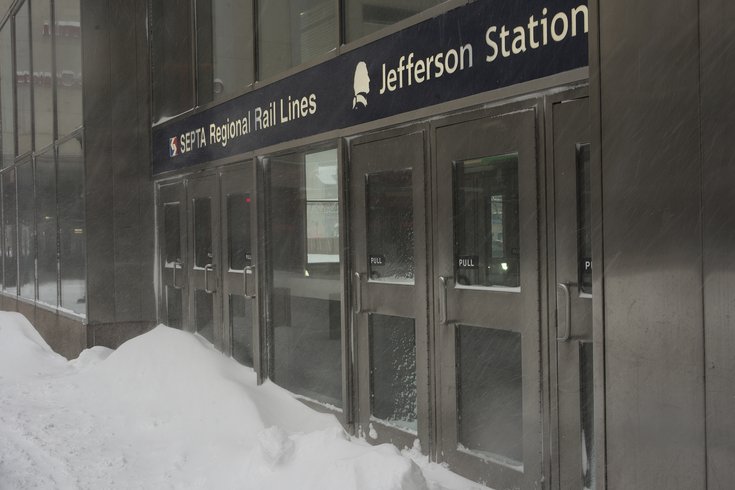 Snow piles up outside Jefferson Station in Center City, which was closed Saturday, Jan. 23, 2016. SEPTA suspended all of its Regional Rail service due to the blizzard, but officials expect those lines will be up and running – likely with delays – in time for Monday's commute.

The transit agency, which had planned to restart those services at 4 a.m., said it wouldn't be ready until 10 a.m., or longer for certain routes and lines.

“There are number of challenges resulting from the storm, which has delivered snowfall totals that exceeded forecasted amounts,” SEPTA General Manager Jeffrey D. Knueppel said late Saturday night in a statement.“The storm’s high winds are creating significant snow drifts that are covering track areas, impacting the operation of third rail power, switches and other key equipment.

"We are continuing to run pilot trains to clear tracks, and have crews dispatched throughout the system to address infrastructure needs,” Knueppel added. “With the Snow Emergency still in place, we are working in close cooperation with the City of Philadelphia, as well as the counties, municipal governments and our other partners throughout the region on efforts to clear snow and ice from roadways critical to our operation.”

SEPTA gave the following rundown for services on Sunday:

• Market Frankford and Broad Street Lines: Service has been running on or close to normal schedules, and is expected to continue overnight and into Sunday.

• Norristown High-Speed Line: Snow-clearing operations with a jet engine are continuing tonight between 69th Street and Bryn Mawr. Once cleared, the operation move to the remaining portion of the line. A more detailed update will be provided at 8 a.m. Sunday.

• Regional Rail: High winds, and resulting snow drifts, have resulted in problems with switches on both SEPTA and Amtrak lines. Service restoration will be based on conditions as we move through tonight and into the morning. An update will be provided Sunday morning.

• CCT Paratransit: Service will continue for dialysis patients only.

• Parking: Parking spaces will be limited throughout the system as plowing continues. Snow removal efforts will run at night all next week, with snow being trucked out of many lots.

For the latest updates, customers should visit www.septa.org, the @SEPTA Twitter and monitor local news for information SEPTA’s service. The SEPTA Customer Service Call Center at (215) 580-7800 will open at 7 a.m. Sunday, and will be staffed with extra personnel. In addition, the SEPTA Social Media Team (@SEPTA_Social) will also be available to answer inquiries via Twitter starting at 7 a.m.