Plowing and salting crews in Southeast Pennsylvania and New Jersey are having a difficult time trying to clear area highways and roads, according to officials.

Many roads, even major arteries, remained snow-covered as the sun went down on Saturday and temperatures began to fall.

PennDOT has at least 450 plows out on streets throughout the Philadelphia area working to keep streets clear of snow, department spokesman Eugene Blaum said, calling Saturday's blizzard a "challenging storm."

The heavy accumulations and high winds have made driving treacherous in some areas, but there have been relatively few accidents as people decided to just stay home.

"We've got serious issues with snow blowing and snow on the roads. If you don't have to travel, please do not." – PennDOT spokesman Eugene Blaum

A stretch of the Pennsylvania Turnpike near Pittsburgh that was shut down by a snowstorm, stranding hundreds of motorists, has begun to clear, officials said Saturday afternoon.

More than 500 cars, trucks and buses got stuck Friday night. On one of the buses was the Temple University gymnastics squad. The athletes spent the night on the bus.

A turnpike official said late Saturday afternoon that no one is expected to spend a second night on the snow-choked highway. According to spokeswoman Renee Colburn, front end loaders and members of the National Guard had began to dig out cars and trucks.

Earlier in the afternoon, the members of the squad tweeted that they would be spending a second night on the Turnpike. The National Guard had dropped off rations, they said. About 3 p.m. they marked their 24th hour on the bus.

Pennsylvania Gov. Tom Wolf said Saturday that the rest of the commonwealth "is in as good a state as can be expected." But he warned people to stay off the roads and said another major problem could prompt a closure of highways in the commonwealth.

Closer to home, there were problems on the roadways. A downed tree on I-476 between the Broomall and St. David's exits had all northbound lanes closed at 4 p.m. A bit earlier, a vehicle lost control and spun out in the northbound lanes of I-295 at Route 130 in West Deptford Township, closing the shoulder.

Earlier in the afternoon, an accident closed the southbound lanes on Route 100 in Pottstown, Montgomery County.

"It's obviously a challenge. This is a very challenging storm that we are dealing with," he said Saturday morning.

Once the storm began Friday night, Blaum said, plow trucks hit the streets. Drivers have been plowing on three-to-four-hour-long routes of about 40 miles each.

But, with the heavy winds and a snowfall rate of between 1-2 inches an hour, he said, drivers aren't finishing their routes before they are seeing snow beginning to pile back up on roadways.

"We've got serious issues with snow blowing and snow on the roads," he said. "If you don't have to travel, please do not."

So far, Blaum said, it seems local residents are heeding warnings to stay inside, and traffic on roadways has been very light.

In New Jersey, Kevin Israel, spokesperson for NJDOT, said the storm has been challenging for plows as the high winds are causing problems with drivers' visibility on the roads.

And, the winds are blowing snow back onto roadways after the plows have come through, he said.

"The biggest challenge of this storm, right now, is the wind," he said.

Overall, he said, NJDOT has about 2,800 pieces of equipment out on the roads throughout New Jersey to help clear snow.

He too said traffic in the Garden State has been light as most residents have stayed home instead of trying to brave the storm. Also, he said, since it's not a weekday, road crews don't need to worry about too many drivers rushing to work.

"We got lucky that this happened on the weekend," he said.

But Israel noted that there has been some flooding in the Atlantic, Ocean and Cape May counties, nearest the shore, but said that, at least as of 1 p.m. on Saturday, he hadn't heard of any heavy damage in those areas.

Asked if the flooding was a cause for concern, with snow still falling throughout the state, Israel said that it was "problematic" but, not currently too concerning.

"It's a significant storm, but it's nothing New Jersey can't handle," he said. 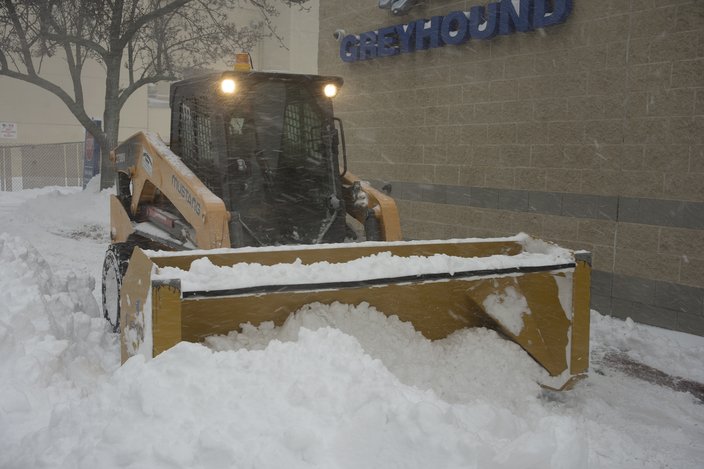 A plow pushes through heavy snow at the Greyhound terminal in Center City.

On Friday, SEPTA suspended nearly all of its transportation service for at least 24 hours beginning at 4 a.m. Saturday. Service continues on the Broad Street Subway and the Market-Frankford Line, which SEPTA hopes will stay on a regular schedule throughout the weekend.

But, for those who need to travel, PATCO was still operating.

PATCO trains were running "on or close to schedule" and PATCO is continuously updating its website with information on the status of trains, including special schedules for Sunday and Monday.

Amtrak, which kept trains running earlier in the day, canceled trains later in the afternoon out of 30th Street Station.

"There has been light traffic and there will be some delays," said Marc Magliari, Amtrak spokesman, had said earlier. "But, we're operational."

But a number of New York City-bound trains, including the Acela Express and Northeast Regional, were canceled later.

Amtrak had expected to keep running trains – out of Philadelphia – for the duration of this weekend's storm, Magliari said.

All flights in and out of Philadelphia International Airport on Saturday have been canceled.

While there haven't been any specific problem areas on area highways, so far, PennDOT's Blaum said, trucks are working to plow as much as they can, both on heavily trafficked arteries and side streets.

"It doesn't take long for the snow to accumulate on the roadways," he said.

Forecasters now say the storm is expected to end around midnight Sunday. Blaum said he's looking forward to having some help from the sun to melt some of the accumulated snow.

But drivers should expect delays on the way to work Monday, he said, as there could be a lot of snow still hanging around come the workweek.

"Drivers should plan for a late start Monday," he said.