Owls stuck on highway for full day; National Guard has been deployed to assist with blizzard-related traffic jam 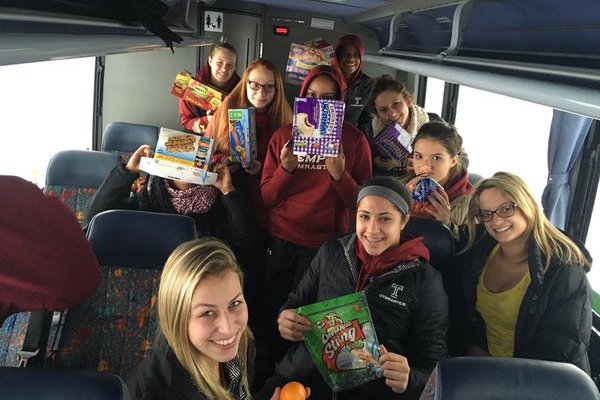 Members of the Temple University women's gymnastics team show off some snacks they're enjoying while stuck on the team bus. They've been stranded on the Pennsylvania Turnpike for over 13 hours thanks to a large snowstorm that swept through the region.

Members of the Temple University Owls gymnastics team who became stranded on the Pennsylvania Turnpike for more than a full day during this weekend's record-breaking blizzard were back on the move by late Saturday night.

After the Pennsylvania National Guard was deployed to help them and other motorists stuck on the highway, the team tweeted that they were finally off the bus.

Off the bus with 🍕 in hand... Safe and sound! Thank you again to everyone for hanging in there with us ❤️ pic.twitter.com/o0Zlm74LnE

According to the Twitter feeds of the gymnastics team and their trainer Mike Watts, the team bus had been stuck on the Pennsylvania Turnpike since late Friday night. They were headed to a meet at the University of Pittsburgh.

The team didn't let their predicament get them down, however. The watched a marathon of Disney movies to get them through the wait.

Being told that snow plows are still about 2 miles behind us. Still no timetable on when we can get moving again.

13 hours in this spot on the way to Pitt.Safe to say we'd be happy to move any day now. Disney movies to the rescue! pic.twitter.com/tdkon22P0R

Wreck It Ralph to be exact 👍🏽 pic.twitter.com/aOfHAdI1uG

@aliciavitarelli Temple Women's Gymnastics (@TUWG) with all of their snacks during the 14hr wait. Not much is left pic.twitter.com/s8DL72O1lY

We've hit the 24 hour mark on the bus! Still stuck out here on the @PA_Turnpike but staying warm and positive #Snowzilla

The National Guard has dropped off military rations for us... Looking at night number 2. #TempleTuff

#TUG is on the move after more than 24 hours! *tears of joy pic.twitter.com/LGCGoBVL8e

The team bus sat in the same spot around Mile Marker 140 in the western part of the state along with other motorists in a 7-mile-long line of cars.

Umme Salim-Beasley told the Associated Press that the bus was trapped about 80 miles from Pittsburgh. She said they left Philadelphia at about 2 p.m. Friday to try to beat the storm but ran into traffic.

Salim-Beasley said her team's provisions held out during the long wait. Fire department personnel brought them water — and they usually travel with a large amount of snacks "so those came in handy." The National Guard also brought additional supplies.

Some pockets of stranded motorists stretched back 2 or 3 miles, turnpike officials said. The National Guard was mobilized to help clear the roadway and first responders used ATVs to reach stuck motorists.

A PennDOT official said Saturday that dealing with the winter storm has been "very challenging," adding that they're having serious issues with snow on the road.

Also stuck on the Pennsylvania Turnpike was the Duquesne University men's basketball team. Coach Jim Ferry said early on Saturday that his guys were running out of leftover pizza they bought on the way home from an 86-75 win over George Mason on Friday.

"We haven't moved one inch in 12 hours," he told The Associated Press on Saturday morning. Their bus got stuck around 9:15 p.m. on Friday.

"We're getting pretty hungry," he said. "We hope it starts moving pretty soon."

Just before 8 p.m. Saturday night, the Duquesne basketball team posted a celebratory video announcing that they were on the move.

Gov. Tom Wolf said in a statement the backup was caused when trucks failed to climb hills.

"The safety of Pennsylvanians is my top priority, as many areas across Pennsylvania have been hit hard by this storm, which features heavy snow falling at a fast rate," Wolf said. "First responders from multiple state, county and local agencies are working together to address issues and ensure people are safe."

A turnpike official said no one is expected to spend a second night on the snow-choked highway.

The Associated Press contributed to this article.