The shooting occurred when the Norristown office was unoccupied 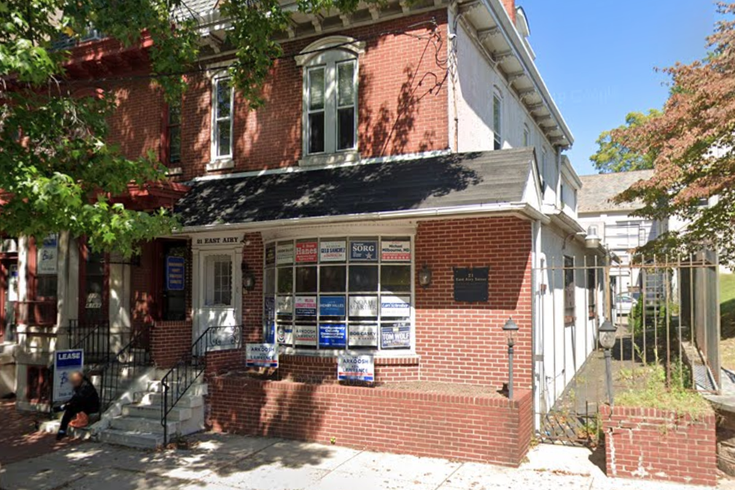 Bullet holes were discovered at the Montgomery County Democratic Committee's headquarters, above, on the day Joe Biden was sworn into office in Washington, D.C.

Bullet holes were found at the Montgomery County Democratic Committee's headquarters in Norristown, just a few weeks after an email threatened violence against the office.

The shots were fired when the office was unoccupied, according to the Inquirer. No one was hurt.

Brian Levy, the local party's executive director, discovered three bullet holes in the front window when he stopped by the East Airy Street building to pick up mail Wednesday afternoon, according to an email committee chairman Joe Foster sent to supporters.

Two bullets hit a desk and another struck a cardboard box on the desk, Foster said. It remains unclear when the shooting took place, but Levy told Norristown police that it likely occurred between 6:30 p.m. Tuesday and 7:30 p.m. Wednesday, a period when no one was in the office.

Norristown Police responded to the situation Wednesday afternoon, Chief Mark Talbot told PhillyVoice. They are jointly investigating the shooting with the FBI and Montgomery County Detectives.

In early January, the committee received an email threatening violence against the headquarters. The message, which was passed along to the FBI, did not specifically name the county Democratic party or any officials.

Police declined to release the specific contents of the email and it is unknown whether the message is directly tied to the shooting.

However, the email's sender "alluded to a stolen election," Talbot said.

Surveillance footage from the county courthouse and other county offices located across the street are being reviewed by detectives. The committee is now implementing its own surveillance cameras and considering other security options.

The Montgomery County Commissioners and the county sheriff also were notified of the shooting.

"I condemn this violence and hope the perpetrator is caught and prosecuted," Montgomery County Commissioners Chair Val Arkoosh said. "Thankfully no one was hurt."

"Gun violence is horrible whenever and wherever it happens," Montgomery County Commissioners Vice Chair Ken Lawrence Jr. said. "This really hit home because I’ve spent countless hours in this building. In non-pandemic times, it is filled with employees and volunteers. Violence is never the answer to settle any disagreement."

The shooting occurred about two weeks after a mob violently attacked the U.S. Capitol after President Donald Trump peddled false claims of voter fraud for months. The deadly insurrection, which interrupted Congress as it was certifying Joe Biden's election win, led to Trump's second impeachment.

Thousands of National Guard troops were deployed to protect the nation's capital ahead of Inauguration Day and the FBI warned of armed protests at state capitols.