More children killed in a school shooting, and Twitter scorches Toomey on reaction 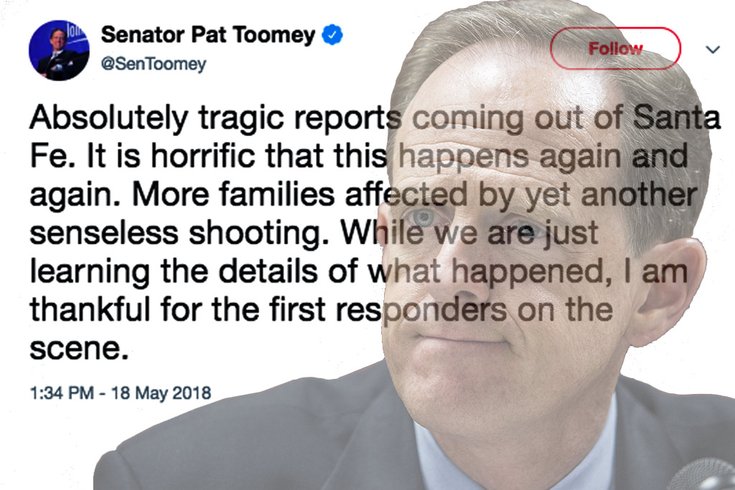 Pat Toomey tweeted about the tragic news out of Santa Fe, Texas. The Twitterverse reacted.

Pennsylvania Sen. Pat Toomey on Friday reacted on Twitter to the "absolutely tragic" news that more American schoolchildren are dead after a 17-year-old student opened fire at a school in Santa Fe, Texas.

With the latest reports indicating nine students and one teacher dead in the violence, many were left wondering, just three months after 17 students and staff were killed in Parkland, Florida, when will it end. And more specificially, when will Congress act on gun reform.

Absolutely tragic reports coming out of Santa Fe. It is horrific that this happens again and again. More families affected by yet another senseless shooting. While we are just learning the details of what happened, I am thankful for the first responders on the scene.

To be fair, Toomey does support some federal gun safety measures, including strengthening of background checks for all commercial sales, including those made at gun shows and on the internet; banning the purchase of firearms by people on the No Fly List; and directing the FBI to notify state law enforcement when a prospective gun buyer lies about their criminal background.

But Toomey's response to Friday's violence, and the accompanying reaction in the Twitterverse, make clear that many people do not think Toomey individually and Congress as a group are doing enough to prevent more children's blood spilled. Here's a sampling of some of the 206 responses to his tweet:

Absolutely tragic reports coming out of Santa Fe. It is horrific that this happens again and again. More families affected by yet another senseless shooting. While we are just learning the details of what happened, I am thankful for the first responders on the scene.

It IS horrific. As is your inaction.

Hey @SenToomey: If you spent half as much time & energy on #CommonSenseGunLaws as you do for thanking me for begging you to DO YOUR JOB, 9 more people in Texas might still be alive. Will it be my kids next week in western PA? pic.twitter.com/R61adt2NT8

Sadly, you are also thankful for NRA donations....

This is what you've done so far... pic.twitter.com/GNPmBjzYxM

Once again , if you aren’t willing to do anything to prevent such tragedies, then you should look for another line of work.

And you get how much from the NRA? Thoughts and Prayers.....lather, rinse, repeat. You need to be voted out of office.

You will forever be the weasel that tries to play both sides of the gun debate. Never forget this guy sat-in with Dems to get a vote put on floor only to vote against it.

Protect our citizens. This is a national disgrace