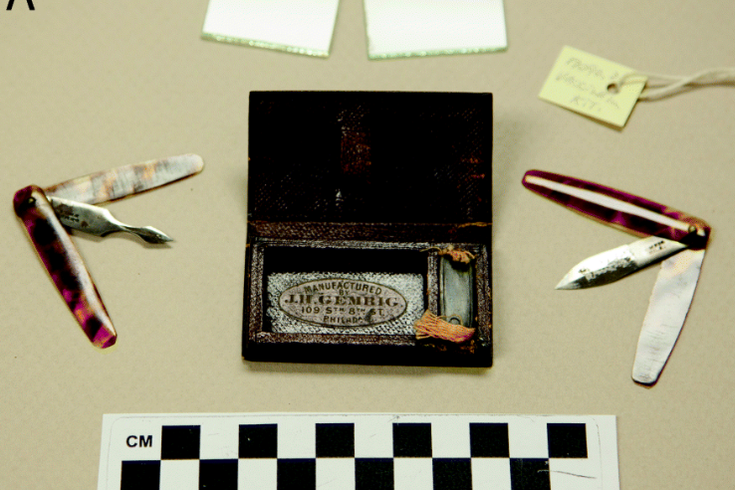 These Civil-War era smallpox vaccine kits were found in a drawer at the Mütter Museum in Philadelphia. DNA on the tools was analyzed to help understand early efforts to develop strategies to fight the deadly disease.

Civil War-era smallpox vaccination kits discovered in a drawer at Philadelphia's Mütter Museum could prove to be a valuable tool in understanding the medical journey to eradicate the devastating virus, and in turn spark ideas in the battle against the present-day SARS-CoV-2.

Former Mütter Museum director Robert Hicks, now a senior consulting scholar at the Center City destination, was giving a tour to a new employee when he found the leather vaccination kits tucked away in a drawer. The kits contained lancets, tin boxes and glass slides that still contained biological traces from the 1860s.

Hicks had the kits sent to the U.S. Centers for Disease Control & Prevention to test them for smallpox. Scientists were then able to draw insights from these early attempts to beat the disease, which later became the first global scourge eliminated by vaccination, Stat News reported on Sunday.

Vaccination methods in the 18th century were still unrefined to the degree that would eventually vanquish smallpox in the second half of the 20th century. Before mass production at labs and factories, smallpox vaccines were developed in direct human chains using milder related orthopoxviruses, such as cowpox and horsepox, for cross-infection.

During the Civil War, doctors carried these custom cases with them to inoculate soldiers and citizens. At the time, before germ theory rose to prominence, medical tools were rarely washed. Even after more than a century, traces of "ancient" DNA can be found on these instruments and analyzed using modern genomic testing.

Scab molecule specimens taken from some of the Mütter Museum instruments tested positive for vaccinia, the virus then used in the smallpox vaccination. There were no signs of variola, the actual smallpox virus.

A study published Monday in Genome Biology examines the importance of historical vaccine development in demonstrating that distantly related viruses can play a role in protection against more dangerous pathogens.

"One of the reasons you have lifelong immunity is because the virus shifts so little over the course of its history," Hendrik Poinar, the study's co-author and director of the McMaster University Ancient DNA Centre, told Stat News. "This work points to the importance of looking at the diversity of these vaccine strains. We don't know how many could provide cross-protection from a wide range of viruses, such as flus or coronaviruses."

The study further found that the Philadelphia area may have had a common source for virus strain material between the Civil War and the early 20th century.

Smallpox was a vicious disease, with a mortality as high as 30% and leaving those who survived with disfiguring pockmarks.

Poinar believes that level of urgency helped drive compliance with vaccination efforts leading up to the successful vaccine deployed by the World Health Organization in 1980.

With the novel coronavirus – which is responsible for today's COVID-19 pandemic – concerns remain about broad participation in vaccine development, even as early human trial results from the University of Oxford show safe and promising results.

"There are still so many unknowns about SARS-Cov-2 that it's going to take longer than most people think or want to wait," Poinar said. "I think we expect science to move quickly, but part of the benefit we have in hindsight is it takes a long time to get all the answers. If you want something effective and safe, you have to wait."