Can ultraviolet light be safely used to kill the coronavirus? Some are giving it a try

Transit agencies, restaurants and hotels among those trying to harness century-old technology 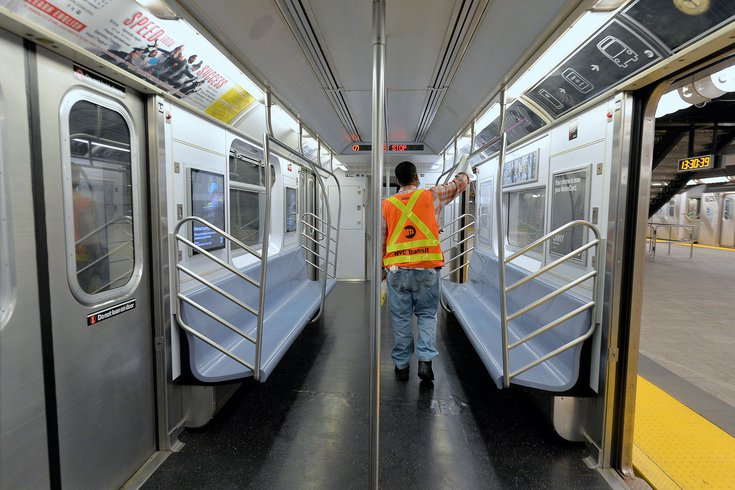 New York City is using ultraviolet light to disinfect some of its subway cars and buses as part of a pilot program. Above, an MTA worker wipes down the handrails of a subway car.

Using ultraviolet light to disinfect surfaces – and even the air – is being increasingly considered as a sanitation strategy amid the COVID-19 pandemic.

UV light has long been used to kill viruses in hospitals and laboratories. Now, some transit agencies, hotels, restaurants and other businesses are turning to the technology. And various at-home products are on the market.

But some health experts are warning of the dangers of the technology, noting it requires a specific dose and a complex process best completed by trained professionals.

There are three forms of UV light based on their wavelengths. UVC light, which has the shortest wavelength and packs the greatest energy, can effectively disinfect spaces.

Research conducted by physicists at Henry Ford Hospital in Detroit has shown that UVC light can kill SARS-CoV-2, the coronavirus that causes COVID-19, on N95 respirators. Their study, which has yet to be peer-reviewed, was posted last month to the preprint database medRxiv.

Previous research has found that UVC light can effectively inactivate the airborne particles that transmit measles, tuberculosis and SARS-CoV-1, the coronavirus that caused the SARS epidemic nearly 20 years ago.

"UV light disinfection has been around about 100 years," said James Malley, a professor of civil and environmental engineering at the University of New Hampshire, according to The Miami Herald. "Done well, it can be a great tool in the toolbox, because it’s an extremely rapid physical disinfectant that is chemical free and it literally works at the speed of light."

NJ Transit is among several transit agencies experimenting with UV light technology. The agency contracted Rutgers University's Center for Advanced Infrastructure and Transportation to study the effectiveness of UV light to kill the coronavirus inside its transit vehicles.

Manco & Manco, a popular Jersey Shore pizza chain, announced it would use UVC light to sanitize its Ocean City locations after three employees tested positive for the coronavirus.

Elsewhere, the Beverly Hilton Hotel in California is using a three-foot-tall robot to shoot UV light at surfaces in unoccupied rooms. And Marlaina's Mediterranean Kitchen in Seattle has installed a UV technology system that zaps airborne particles near the ceiling of the restaurant.

Still, health experts cite the dangers of using UV light, noting it can cause cancer, cataracts and skin damage.

Penn Medicine acknowledges the benefits of UV light, but urges caution in its FAQ on the coronavirus:

"Studies show that UV light can be used to kill airborne COVID-19 particles and disinfect surfaces. For this reason, some hospitals, subways, and other public locations are using UV light to help disinfect areas when they are not occupied by people. While helpful for cleaning these areas, UV light has not been shown to prevent COVID-19 infection in humans or to kill the virus in infected patients. The safety and efficacy of many UV light devices sold to the public are not routinely reviewed, so these should be used with caution. Overexposure to ultraviolet rays can have harmful health effects and is a major risk factor for cancer."

"Just a small amount of bleach can kill the coronavirus in a shorter time, close to 10 seconds," Mirjafari told WINK News, a Southwest Florida television station.

Yet, Columbia University researchers may have found way to safely harness the power of UVC light.

Dr. David Brenner has created a modified version of UVC light that he said does not penetrate the barriers of the skin and eyes. The so-called "far-UVC," which has a shortened wavelength, can still destroy bacteria and viruses, which are much smaller than cells. Studies have shown it is not dangerous to people in limited quantities, he told Business Insider.

New York City is using his technology as part of a pilot program to disinfect buses and subways. Brenner said the technology could be available for public or commercial spaces by the end of the year.

"The whole point is to keep killing the viruses as they're being produced — as people sneeze and talk and cough and shout," Brenner said. "The lower the level of virus in the air, the less chance there is that it can be transmitted from one person to another."