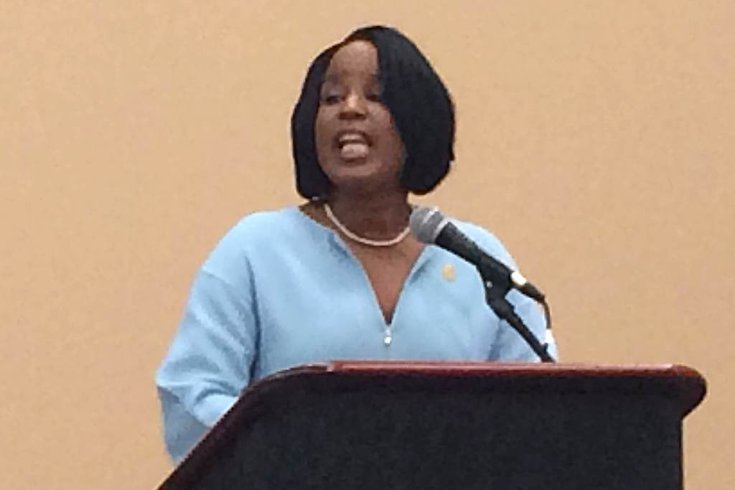 Roslyn Brock, chairman of the NAACP board of directors, talks Friday afternoon about the organization's national convention in Philadelphia.

NAACP leaders hailed the final lowering of the Confederate Flag on Friday at the South Carolina capitol building as the civil rights organization prepared to kick off its national convention in Philadelphia.

"What a proud moment it is, not for the state of South Carolina only, but for this republic, the United States of America, when a symbol of hatred and of division and exclusion was brought down," said Roslyn M. Brock, chairman of the NAACP board of directors. "We're so pleased that the Confederate battle flag has come down from the public spaces and the government buildings in the state of South Carolina.

"I think for the president, he's looking long-term at his legacy. He has to be provocative in that area. He has to say something special in that area." – NAACP board Vice Chairman Leon Russell

"The Confederate battle flag is a part of American history, but it is one that we can best remember in a museum for the proud heritage of those who fought for what they believed," she said.

But there are other issues plaguing the United States, NAACP leaders said during a Friday afternoon press conference at the Philadelphia Convention Center. Issues of police violence, racial profiling, voting rights and healthcare access will be discussed throughout the five-day convention, which begins Saturday and is expected to draw 8,000 people, NAACP leaders said.

"This is a historic gathering," NAACP President Cornell Williams Brooks said. "Why? Because all across this country, we've seen over the course of the last year tragedy after tragedy, instances of police brutality, instances of police misconduct (and) the hometown of the NAACP in Baltimore, Maryland, go up in flames."

Race issues have dominated national headlines the past year, including the police-involved fatal shooting of Michael Brown, an 18-year-old unarmed African-American male in Ferguson, Missouri, and the killing of nine members of Emanuel AME Church in Charleston, South Carolina. In between, the nation witnessed protests over police brutality and racial profiling following the police-involved deaths of other blacks, including Baltimore's Freddie Gray.

With race relations at the forefront of the nation's social conscience, NAACP leaders said they invited each of the five living presidents to participate in a discussion on contemporary race issues -- for varying reasons, including health, only Obama and Clinton accepted.

Obama, who has shown greater willingness to address racial issues as his presidency winds down, is expected to speak sometime Tuesday afternoon.

"I think for the president, he's looking long-term at his legacy," NAACP board Vice Chairman Leon Russell said. "He has to be provocative in that area. He has to say something special in that area."

NAACP leaders said they did not extend invitations to the 2016 presidential candidates, because the organization first wants to determine its own agenda for the upcoming election.

NAACP leaders also addressed the resignation of Spokane, Washington, branch leader Rachel Dolezal, who was accused of misrepresenting herself as African-American by members of her family.

Russell called the controversy a "distraction," noting that local leadership elects its own president.

"There is no criteria that says you have to be black in order to be president of a branch," Russell said. "How a person depicts himself, that's up to that person. The local unit obviously elected that person as president."

Brooks said the NAACP's focus has long been on issues rather than individuals.

"We try to emphasize character, integrity and we're endeavoring to do that by helping our branches (and) our units with grassroots training in terms of how to do the work," Brooks said. "But at the end of the day, when you have 2,000-plus units, if on occasion there is a problem, we try to address it with integrity and we try to address it quickly. No less than the Wall Street Journal credited the NAACP with how we responded to that crisis."

Much of the convention's focus likely will be centered elsewhere throughout the week, as the NAACP seeks to examine six main areas of racial injustice — civic engagement, health care, education, economic development, environmental justice and criminal justice.

"We've got work in front of us," said Rodney Muhammad, president of the Philadelphia NAACP. "If you're wondering why the NAACP is here? Injustice is here."

The schedule for the convention can be viewed here.