Which parts of an NBA game will be most impacted by fan-less experience? 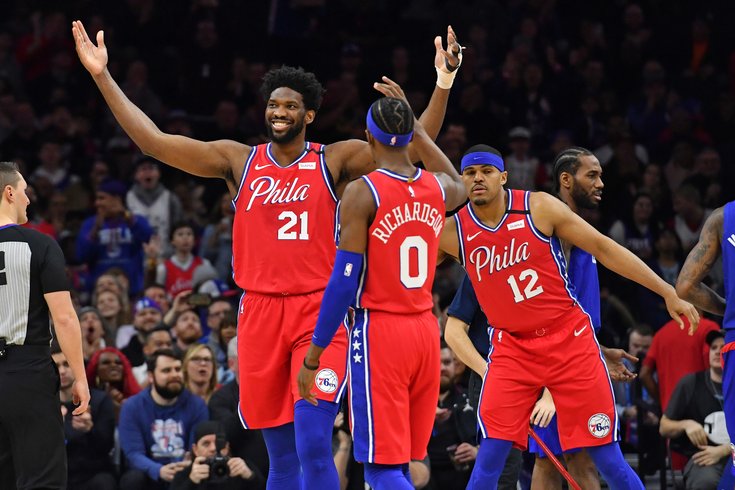 The Sixers are not getting much positive buzz heading into the 2021 season.

COVID-19 cases are raging in the state of Florida, but as of this writing, the NBA's plan to resume action in Orlando appears as though it will move forward. Details on plans have been shared with players, hotel accommodations are being figured out, and many around the country are looking forward to a respite from the real world, even if it's only for two hours at a time.

What we don't know about how these games will look far outstrips what we do know, but one idea intrigues me in particular: how will the players respond in this neutral-site, fan-less environment? Though they spend their summers playing competitive pickup games around the country, most players would cop to the impact of the environment on the game itself if you allowed them to speak candidly.

In fact, when the Knicks experimented with no game-ops during a half against the Golden State Warriors a few years ago, Warriors forward Draymond Green unloaded on what he felt was a "disrespectful" act.

“It was pathetic. It was ridiculous. It changed the flow of the game, it changed everything,” said Green. “You get so used to playing the game a certain way, to completely change that, to me I think it was disrespectful to everyone...all these people who have done these things to change the game from an entertainment perspective and give the game a great vibe. That’s complete disrespect. You advance things in the world to make it better, you don’t go back to what was bad. It’s like, computers can do anything for us. It’s like going back to paper."

Though the league has reportedly considered pumping in crowd noise from basketball sim NBA 2K to make up for the loss of fans, it's hard to make up for the real thing. With that in mind and after speaking with some people around the league, here are a few ways* we might see games altered by this new dynamic.

*I fully expect that absolutely nothing will change now that I have written this.

Cooling down "the hot hand"

Long before there was a statistical revolution in sports, there was a debate over whether a player having a "hot hand" was real. A study in 1985 claimed to debunk the concept, but increased access to data (not to mention more refined data collection methods) led to renewed interest in the topic over the last five years, with a group of researchers proclaiming what has always seemed intuitive to hoops fans: once you see a few shots go down, the rest come easier.

But is this the case in a neutral-site game with no audience? Part of the reason the hot-hand theory has persisted is because of the way we see players respond to crowds when they get going, home or away. A visiting player hears the groans of the opponent's fans as he gets going, while a man cooking on his home court is never shy about playing it up for the crowd.

It's a time-honored tradition for Sixers stars. Allen Iverson used to love cupping his ear with his hand to egg on Philly fans, and Joel Embiid is not shy about shimmying or dancing in the midst of a dominant stretch. It's harder to know what either would do in a setting where there's no call-and-response.

If we believe that's the case for individual players, does it track for team runs? The Sixers have been elite at home this season, fueled by lockdown defensive stretches that can flip games (they're giving up nearly 10 points less per game at home than on the road). Is this really a product of the home environment, and if so, does that hamper Philadelphia's ability to go on runs relative to other teams in Orlando?

Anyone who has played a decent amount of pickup basketball has been on a team who rode a hot shooter to victory or got run off the court by the same sort of player. The hot hand will probably stick around in some form, it just may not be so prominent.

One positive outcome of not having fans in the building? Being able to hear the players trash talk throughout the game. Even as someone fortunate to sit close to the action during normal times, the bits and pieces you can pick up in a crowded arena are few and far between.

But there's a more strategic element to consider in an empty gym. Players will be able to hear each other as clear as they ever have throughout an NBA game, and that could lead to a level of defensive cohesion (on paper, anyway) that is hard to match in a chaotic environment.

Defense is where a lot of coaching staffs tend to exert more influence on a play-to-play basis. Sixers assistant Ime Udoka has been Brett Brown's "defensive coordinator" this season, and can often be seen roaming the sideline barking orders or making last-second check-ins with players when they come out of timeouts. Communications from the bench will be easier to make than they have ever been in this new environment.

Not everyone will view that as an out-and-out positive. More abrasive head coaches will be hard to escape for players in-game, and while they might be willing to receive harsh feedback behind closed doors at practice, will the same hold true when it's televised for a national audience? If all you hear is a coach's voice without being intermittently drowned out by the crowd, will relationships fray easier?

And that's all without considering the flipside of this. Will defense actually improve or even reach previous levels after a multiple-month hiatus? Teams will have to regain sharpness, similar to the manner that they do over months of regular-season play, in a short window before the playoffs begin. Extra chatter may not be enough to make up the difference.

Nothing infuriates the average fan like watching professional basketball players miss free throws. If you can make 80/100 in an empty gym, the logic insists, so should every NBA player. Time to put that theory to the test!

This is the closest we're ever going to see to practice environment free-throws, and perhaps we will find out that fans yelling and screaming (or conversely, quieting down) really does impact shooters at the line. Philadelphia's Frosty Freeze-Out promotion is predicated on the idea that fans can tilt a shooter, so long as you provide them with a little extra incentive.

The data, however, shows that there often isn't a big difference between shooting free throws in front of a hostile crowd vs. a welcoming one. Philadelphia, for example, has actually shot better on the road this season (on more attempts per game) in spite of their overall struggles away from Wells Fargo Center.

If we believe that to be the case, then the game situation might still be enough to impact a shooter's success at the line. Dads everywhere will be demanding more, I can tell you that.

...but worse outside shooting

Stay with me for a moment. This may sound silly to anyone who hasn't ever done so, but shooting on a standard hoop in a gym with a wall directly behind it is different than shooting in an arena, rows of fans serving as a backdrop.

The impact of changing sightlines has been studied when dome stadiums are used for Final Four games, and the great KenPom once wrote of the drop-off in shooting at NRG/Reliant Stadium in Houston specifically. Historically, college basketball teams have underperformed when shooting in venues that aren't typically used for basketball.

Here's where the facilities in Disney World come into play. The Wide World of Sports Complex features numerous arenas/venues, each of which can be configured differently depending on the event. This shot from the HP Field House, for example, is a snapshot of what you might see at an AAU Tournament. 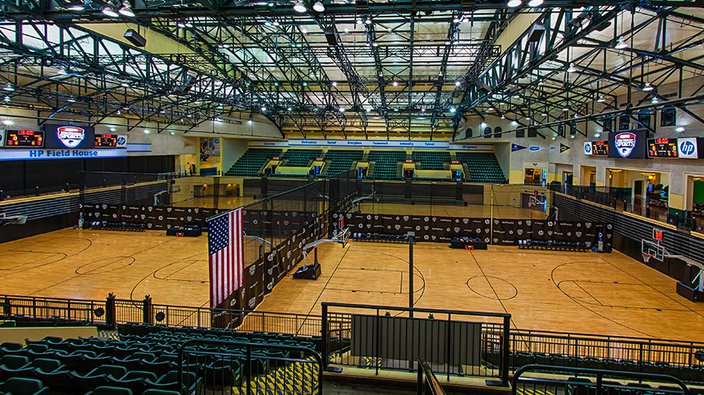 With the NBA attempting to squeeze in games for 22 teams during this unprecedented period, the manner in which they'll get teams onto the court is of some intrigue. Though it seems unlikely teams would play on courts that don't have a level of uniformity, it's not impossible possible teams could shoot on different backdrops from one half to the next. Small decisions that seem inconsequential might matter for depth-perception — do you pull out a set of bleachers that no one is going to sit in?

Basketball, like every other part of American life, is going to look a little different for the time being. And even beyond the X's and O's, there are bits of intrigue that we won't have a handle on until they tip-off in late July.