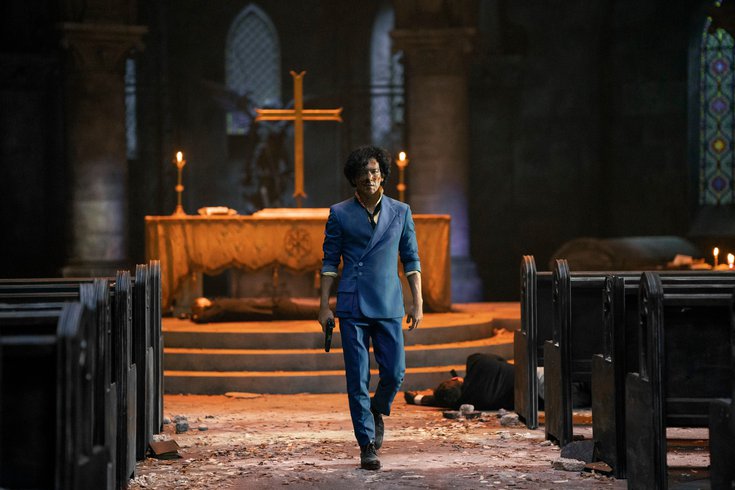 You would be hard-pressed to find a richer piece of 90s media than "Cowboy Bebop." Shinichiro Watanabe's landmark piece of animation was responsible for introducing a lot of Americans to eastern animation when it made its way to Adult Swim in the early 2000s, blending noir, science fiction and western themes with a jazz soundtrack to produce a 26-episode tour de force. Nostalgia sells better than almost anything else right now — mass media is not exactly brimming with original IP — so Netflix's attempt to turn it into a live-action show has been both anticipated and feared depending on who you ask.

Score one for the doubters. Aside from the few moments where Netflix's "Cowboy Bebop" copies and pastes scenes from the source, it is unrecognizable to the point of questioning whether the people responsible for the adaptation watched or understood the show in the first place.

For the uninitiated, "Bebop" is a story revolving around space bounty hunters in the year 2071, focusing on three characters primarily: Spike Spiegel, a former organized crime hitman fleeing his past; Jet Black, a former police officer; and Faye Valentine, an amnesiac woman woken out of cryo slumber, tumbling through life in space. They are emotionally-stunted, baggage-ridden people whose business takes a backseat to work through the hangups that brought them together in the first place.

At least, that's who they were in Watanabe's original version. When we first meet our "heroes" this time around, Spike and Jet are partners lifted out of a buddy cop movie, one "I'm too old for this s***" away from starring in Mel Gibson's final "Lethal Weapon" sequel. Faye — so reluctant to trust people that fleeing the Bebop is a recurring event in the anime — actively seeks out the help of Spike and Jet and leaps feet-first into a hot-and-heavy relationship with a side character in Season 1. And these are minor tweaks compared to some of the goofy, hare-brained choices made to change the show's plot, but they are the earliest cracks in the foundation that show you where this is headed.

It's a credit to the cast and casting decisions that their chemistry still works as well as it does. Mustafa Shakir is absolutely dead on as Jet, right down to his actual voice matching the original English dub. John Cho is a bit old to play a convincing martial arts expert in Spike, but there is an admirable effort to find the mix of cool detachment and conflict-seeking the character demands.

The writing, however, is an absolute disaster. Netflix has taken a show that borrows from sources as disparate as John Woo, Batman, David Bowie, Alien and Clint Eastwood and flattened it into the worst possible version of a modern comic book movie. Its characters speak almost exclusively in punchy, D-level jokes with no substance, style, or mystery left to the imagination, committed to overexplaining without actually saying anything of consequence.

Stories that were once told in a brisk, 24 minutes are stretched past their breaking point up to an hour. That choice doesn't enrich the plot and simply bombards the viewer with references to Jet's daughter (a character invented strictly for this version of the show) and hamfisted dialogue that sounds like preteens discovering curse words for the first time. The juvenile writing probably shouldn't have come as a surprise — Netflix's "Bebop" was developed by Christopher Yost, a veteran of comic book adaptations who was one of the writers on "Thor: The Dark World," perhaps the most panned movie in the Marvel Cinematic Universe. That doesn't make it any less grating to listen to, and its impact on the characters is significant.

The residue of our collective Marvel-ization is all over new "Bebop." Instead of telling a story about characters navigating this strange, daunting universe, the universe is built around the central name-brand characters. The fourth episode, a bastardized version of an ecoterrorist plot from the source material, features an extended back-and-forth in a diner where the word "nutbags" is used several times for seemingly no reason. The loop is closed when a local newscaster discussing the same topic says, "Oh s***, that's nutbags!" live on air, an in-universe break of the fourth wall whose cringeworthiness is only outstripped by the fact that Netflix chose to promote the show's release with said clip:

“You guys are so lucky that I ran into you.”

Knowing this, we can only assume the team behind Netflix's "Bebop" wants this to be an entirely different sort of property than its namesake, which was more serious in nature and dry when it attempted to be humorous. That's an understandable instinct — simply duplicating a critical and cultural hit is a recipe for disappointment, and change is not inherently bad. But the changes made to "Bebop" don't make sense on their own merits, and they're made worse when the show ties mismatching threads from the original and the new monstrosity together.

The show's worst crime is its focus on Vicious, the original show's violent and calculating big bad, and Julia, the love interest Spike has dwelled on years after fleeing his old life. Their stories were told only partially in the 90s anime, relying on a combination of mystique, flashback and small bits of dialogue to give you just enough information to interpret their past.

By contrast, Netflix's "Bebop" devotes large chunks of time to develop both characters and does so in ways that make them completely unrecognizable. A nihilist mob assassin and an independent femme fatale are turned into a sniveling failson and a dependent, emotionally incoherent mistress respectively. Alex Hassell's Vicious looking (and feeling) like store-brand Lucius Malfoy only drives the failure home further. Their stories are uninteresting even if you can divorce them from their respective legacies.

This disaster unfolds on multiple fronts. It undermines the motivations and backstories of main cast members, and worse than that, it leads to moments where Netflix attempts to remix classic show moments even as their internal logic crumbles on screen. At a pivotal moment, henchmen take a momentary break from the action for no real reason other than to allow the main trio to get some dialogue and a stroll in. One of Bebop's most iconic scenes is given a full makeover late in Netflix's Season 1, and by the time Yoko Kanno's score begins playing to set the stage, we've long passed the crescendo, wasting the opportunity and flattening what should be a triumphant moment for the show.

(A quick aside: Kanno, whose music with the Seatbelts scored the original series, is one of the few main holdovers in the Netflix version. There's tremendous irony in wasting musical accompaniment to the degree they do here in a show whose name is derived from a style of jazz. Several scenes blend together multiple songs and get diminished impact from all of them.)

Even if you are unburdened by the expectations set by the anime and watching this with fresh eyes, there are production-related flaws all over the place. The fight sequences rely on gratuitous editing and the show is shot at peculiar angles throughout the season, framing the world off-kilter for no discernible reason. Once you notice how many scenes aren't level, it's hard to unsee it. There are some beautiful shots and wow moments from a cinematography perspective, but there are far more occasions where set designs look cheap or are washed out as a result of leaning on CGI. The amusement park where Spike battles Pierrot Le Fou, a sprawling madhouse of lights and roller coasters in the original, is replaced by a park that a below-average church fundraiser would put to shame.

It takes until the second-to-last episode to get an action sequence that feels like a spiritual relative of the original "Bebop," and perhaps that's reason to hope for an improved Season 2. Spike's near-invincible nature is what made moments where he was tested more powerful, and he is shown to be more vulnerable this time around. But the finale suggests any hope on that front may be misplaced.

For all the gratuitous exposition that is done with certain storylines, Netflix's "Bebop" struggles to develop side characters even half as well as its namesake, throwing in longtime crowd favorites as more of a box-checking exercise. If an earnest effort was made to understand the importance of each person and plot development to the show, it doesn’t show up on film. "You're gonna carry that weight," the source's final enduring message at the end of a long and winding journey, is haphazardly thrown into a throwaway piece of dialogue.

The success of a show beyond Earth hinges on the ability to combine the excitement of a new frontier with the stillness of outer space. This is especially true of "Bebop." Sure, there are cowboys and kung fu battles and outer space dogfights, the last of which are in tragically short supply in the new edition. But Watanabe's "Bebop" spends more time studying loneliness and the need to belong, putting the human condition front and center. The midseason, two-part finale even closes with an enduring question: "Do you have a comrade?" It is more concerned with who we consider family and why than it is with, to use the Netflix example, landing bad punchlines about BDSM, blackmail or bidets.

If Netflix wanted to make a show trafficking in the latter, they have all the resources in the world to make it happen. But calling it "Cowboy Bebop" means you are asking people who hold that name in high esteem to support it even after you've changed what that name stands for. And with the original series now also streaming on Netflix, there's no reason for either established fans or newcomers to bother with this one.