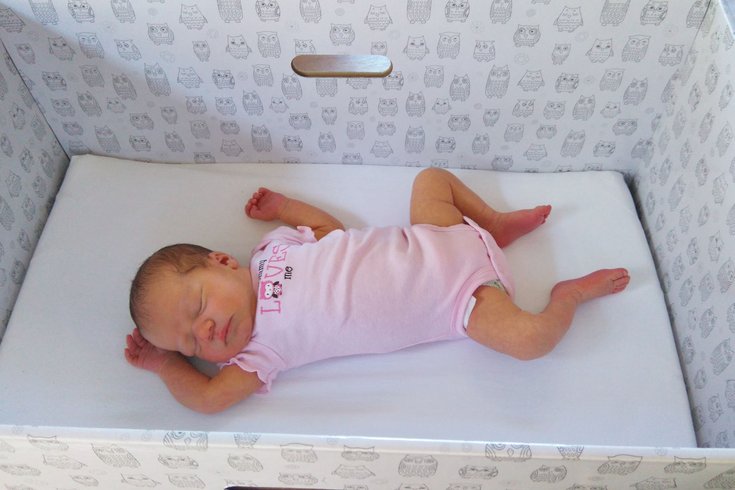 The Finnish Baby Box tradition has spread to Philadelphia and now will begin in New Jersey.

An innovative program to improve infant mortality rates and allow new parents and their babies to get some much-needed sleep will soon launch in New Jersey.

The Baby Box Company announced Tuesday it has partnered with the state's Child Fatality and Near Fatality Review Board to distribute durable cardboard boxes filled with essential items for newborns and large enough to double as a bed for the first couple months of the baby's life.

New Jersey will be the first U.S. state to offer a universal baby box program for its residents.

The effort, made possible through a grant from the U.S. Centers for Disease Control, is expected to provide about 105,000 baby boxes in 2017.

The program was created to reduce the rate of Sudden Infant Death Syndrome, which contributes to America's high infant mortality rate. At 6.5 infant deaths per 1,000 births, the U.S. ranks 23rd in the world and behind most industrialized countries. Last year, 93 percent of deaths due to SIDS were associated with sleep complications.

The use of baby boxes has been linked to improved health outcomes for newborns and reduced rate of SIDS. The concept originated about 80 years ago in Finland where the infant mortality rate is the world's lowest at 1.3 deaths per 1,000 births.

Now, New Jersey health officials are trying to make it as easy as possible for all expecting parents in the state to get their hands on baby boxes. The goals of the program include giving newborns a safe place to sleep and educating couples on parenting techniques.

Beginning Thursday, expecting and new parents can complete a three-step process to claim a baby box, which will also contain diapers, a onesie, baby wipes, and breast pads and nipple cream for breastfeeding mothers.

First, expecting and new parents in New Jersey must register online. On the company's website, they must review curriculum on newborn care and take a short quiz. When they successfully complete the process, parents can choose whether to pick up the baby box or have it delivered to their home.

On a smaller scale, Temple University Hospital started a similar program with the Baby Box Company last May. The institution handed out 3,000 baby boxes, about the number of births at the hospital annually.

The Baby Box Company, based in Los Angeles, was founded in 2013 and oversees programs in 12 countries.