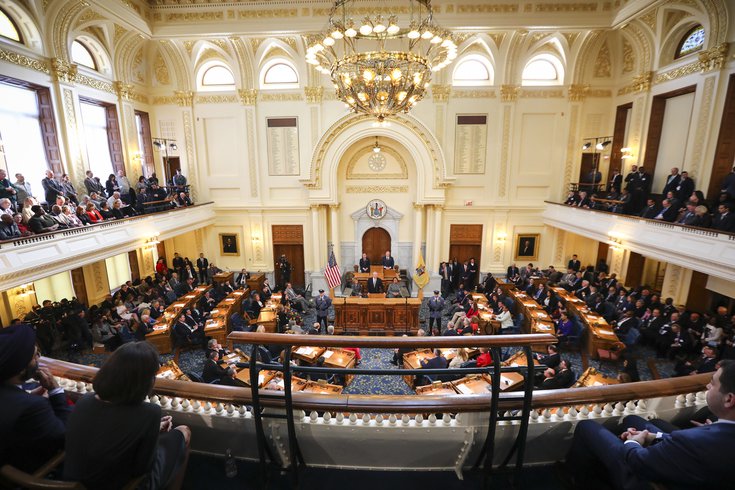 Legislators advanced a bill in New Jersey on Thursday that would connect non-violent offenders with medical treatment instead of jailing them. Supporters of the bill say it would save the state money while reducing recidivism rates. Above is the Assembly Chambers in New Jersey's State House in Trenton.

Legislators advanced a bill Thursday that would divert nonviolent criminal offenders from the court system into community-based mental health treatment.

Supporters say more than a quarter of people now incarcerated have mental health disorders. Connecting them with medical treatment instead of jailing them would save the state money while reducing recidivism by better addressing their needs, said Adam Sagot, a psychiatrist with Hackensack Meridien Health.

"We are in an epidemic of mental health crisis," said Sagot, testifying in support of the bill before the Assembly's judiciary committee. "Anything we can do right now to start providing treatment to those individuals on as broad a scope as possible is in everyone's best interest."

The bill had a few critics.

Assemblyman Robert Auth, R-Bergen, said the state should first "test the waters" in a few counties to gauge whether such a concept would work before mandating it statewide. He also worried about not confining people "who may be borderline not quite there … and some other innocent victim gets killed or molested or whatever."

But Assemblyman Raj Mukherji, D-Hudson,, who chairs the committee and sponsored the bill with Assemblywoman Annette Quijano, D-Union, said only people with diagnosed or suspected mental illnesses who commit nonviolent disorderly persons offenses or third- or fourth-degree crimes would be referred for diversion.

"We know it works," agreed Sagot, who testified on behalf of the New Jersey Psychiatric Association.

The state Office of the Public Defender's Carl Herman voiced concerns about who would decide which offenders to divert. The court system – not prosecutors – should oversee the program, said Herman, who directs the office's mental health advocacy.

"We would love to get a lot of people diverted … we're paying $61,000 a year to keep people in jail who don't have to be in jail," Herman said. "But this is not mental health court. This is a diversionary program, which leaves a lot of looseness in terms of the administration."

Despite such objections, the Assembly's judiciary committee advanced the bill, with Auth abstaining.

Mukherji said the bill is "very much a work in progress" and can later be amended to address critics' concerns.

Earlier in the meeting, legislators also heard testimony about a bill that would create a diversionary court for offenders whose crimes were motivated by gambling addiction. The bill was scheduled for discussion, and no vote was taken.