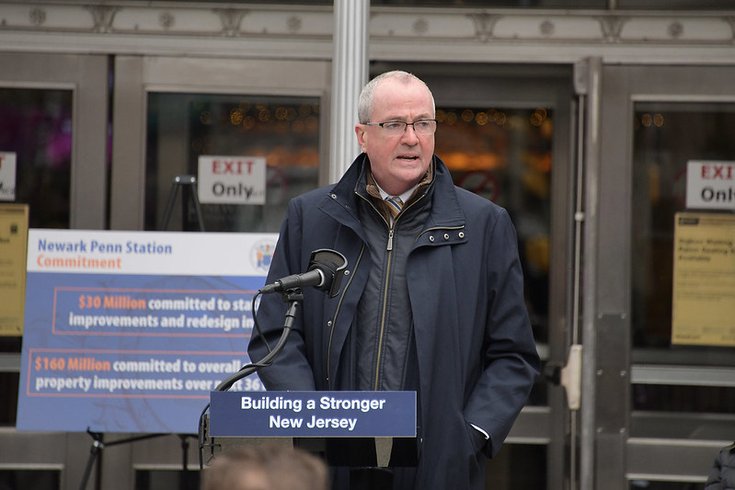 As many as 8,747 people could be hospitalized by mid-January – a total that would easily surpass the previous peak of 8,270, set on April 14.

State officials released a pair of predictive models Wednesday forecasting the trajectory of the public health crisis. One was designed by the New Jersey Department of Health; the other by Gov. Phil Murphy's Office of Innovation.

The ever-changing models, which take into account data and assumed human behaviors, will help state officials plan for the months to come, Murphy said.

The worst-case scenario would play out if residents do not better comply with directives on face masks and social distancing, Murphy said. It also assumes people will gather as usual for Hanukkah and Christmas.

That scenario would lead to as many as 12,595 daily cases by mid-January and higher hospitalization numbers than the April peak.

There are 3,533 patients currently hospitalized across the state, the highest total since last spring. There are 630 patients receiving intensive care and 412 on ventilators.

Murphy warned that the state will need to take action if the health care system becomes crippled by COVID-19 patients. That could mean reimplementing a ban on all elective medical procedures, he said.

"The end of this pandemic is within reach," Murphy said. "It's not going to just come to us – we have to reach out and grab it. There's so much we can do to move these models in the right direction, beyond taking personal responsibility."

The snapshot below forecasts the effect on COVID-19 cases, hospitalizations and ventilator use if compliance does not improve.

The Department of Health model indicates daily cases would peak at 12,595 and hospitalizations would top out at 8,747 in mid-January. The Office of Innovation's model forecasts the peak happening in early February, with 9,932 daily cases and 8,689 hospitalizations.

If residents better comply with public health directives, a moderate-case scenario would result. In that case, the state's health care system would not be overwhelmed, Murphy said.

The surge likely would still peak in mid-January, according to the Department of Health's model, with 9,120 cases and 6,333 hospitalizations.

But the Office of Innovation's models predicts new COVID-19 cases would peak at 7,180 on Christmas Day. Hospitalizations would peak at 5,752 in late January.

Those forecasts are shown below. 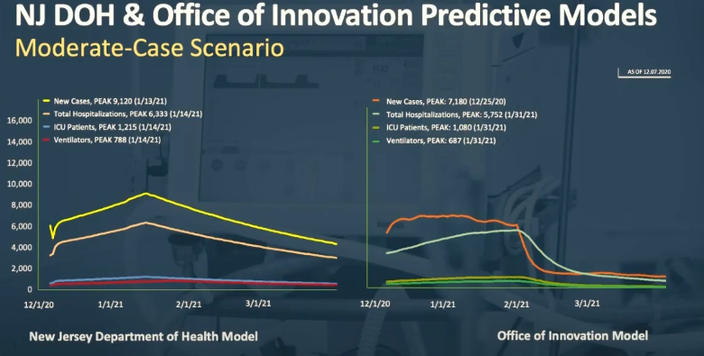 Though a COVID-19 vaccine is expected to be authorized shortly, Murphy said it will not have a significant impact on the state’s handling of the public health crisis over the coming weeks.

Health officials stress that face masks, social distancing and various restrictions will be necessary until a large portion of the population is vaccinated, a process that will take months.

New Jersey recorded 4,665 new coronavirus infections Wednesday, increasing the statewide total to 381,486 since the pandemic began. The state reported 91 fatalities due to COVID-19, bringing the lab-confirmed death toll to 15,674.

The state released on Wednesday a pair of predictive models, one designed by the New Jersey Department of Health and another developed by the Office of Innovation, to show the trajectory of the public health crisis in the coming weeks and months.