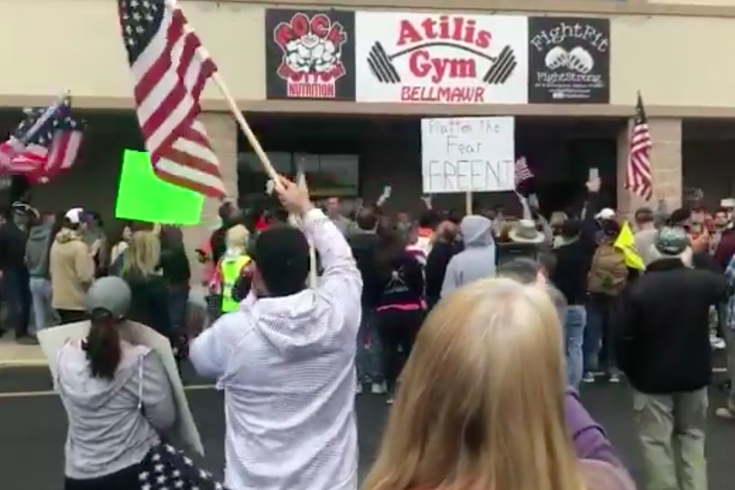 Atilis Gym in Bellmawr reopened on Monday despite state orders for it to remain closed.

Smith was ticketed and issued a summons by Bellmawr police, and those who showed up to the gym were issued warnings by local officials. The state "will take action" against the non-compliant gym, New Jersey Gov. Phil Murphy said on Monday afternoon.

"If you show up at that gym again tomorrow, there's going to be a different reality than showing up today," Murphy said. "These aren't just words. We got to enforce this."

Bellmawr Police arrived at the scene public works crews just before 7:00 a.m. to block off the entrance of the shopping center where the gym is located and place barricades around the crowd that had gathered.

Local authorities said they were there to ensure the safety of those who had gathered,. And while the owners and the people in the crowd were told that they were in violation of Murphy's order, police did not stop the gym from opening, news that elicited a cheer from the crowd.


Doors of Atilis Gym in Bellmawr now open to cheers, in defiance of state orders. pic.twitter.com/BtuMVpg5hP

Members entering the gym were lined up outside, standing six feet apart. They signed waivers, answered questionnaires and got their temperatures taken. Then they were given disinfectant and allowed to enter.

Here are some of the other scenes from the reopening of Atilis Gym on Monday.

More than 200 people have gathered outside Atilis Gym in Bellmawr, NJ in support of the owner’s decision to defy the governor’s orders and reopen the gym. It is set to open at 8 a.m. pic.twitter.com/f2n7RQRnO0

Ralliers are treating Atilis Gym owner Ian Smith like a local celebrity. People are chanting his name and taking selfies with him. pic.twitter.com/NIpUaR11oQ

Despite the scene at Atilis Gym, Murphy is not concerned disobedience among business owners will become a trend, and he noted New Jerseyans have overwhelmingly complied with social distancing guidelines and the state's stay-at-home order and ban on all gatherings.

Smith had announced he would reopen his gym Monday during an interview with FOX News' Tucker Carlson last week.

As of Monday, New Jersey businesses are permitted to provide curbside pickup and delivery services. Customers will not be allowed inside stores and purchases must be done in advance by phone or online. Gyms, which were ordered to close on March 16, were not among those businesses permitted by Murphy to reopen.