The winner faces incumbent Democrat Andy Kim, who ran unopposed in the primary and seeks his second term in November 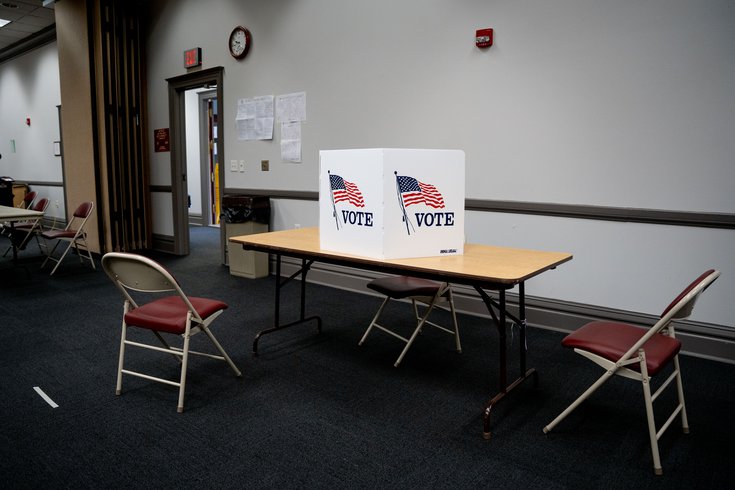 In the New Jersey 3rd Congressional District's Republican primary, David Richter defeated Kate Gibbs by over 27 points to move on to November's general election. Above, a single privacy shield stands on a table at the polling place in the Mount Laurel Community Center .

With over 65% of precincts having reported results, the Associated Press declared Richter the winner on Friday with over 63% of the vote compared to Gibbs earning 36% of the vote.

The 3rd District, which encompasses most of Burlington County and parts of Ocean County, was flipped from Republican to Democrat in 2018 when Kim defeated Republican Rep. Tom McArthur.

Richter once served as the CEO of the construction consulting firm Hill International, where he says he grew the organization from a struggling business with only a few hundred workers into a public company with thousands of employees in public works and infrastructure.

Richter initially ran for office in New Jersey’s 2nd Congressional District, but he withdrew from the primary after U.S. Rep. Jeff Van Drew switched from Democrat to Republican last December and earned the support of President Donald Trump.

A lifelong Republican, Richter has received the endorsement of the Ocean County Republican Committee and the National Rifle Association.

Gibbs was a freeholder in Burlington County from 2016-2019, including a stint as director of the county’s board of freeholders in 2018. During her time in that office, she says she worked to cut taxes, improve school security, and passed an equal pay for equal work resolution.

She has also served as the deputy director of the Engineers Labor-Employer Cooperative Local 825 union, where she said she helped create jobs, build infrastructure, and improve the local economy.

Gibbs had received the endorsement of the Burlington County Republican Committee, an organization which she served on for four years, as well as the Republican Main Street Partnership PAC and the Philadelphia Inquirer.

Gibbs was critical of Richter’s business record at Hill International and switching congressional districts, while Richter has called out Gibbs’ record as Burlington County freeholder.

New Jersey’s 2020 primary was predominantly conducted via vote-by-mail due to the COVID-19 pandemic.The primary originally was scheduled to take place on June 2, but was pushed back due to the ongoing coronavirus crisis across the state.