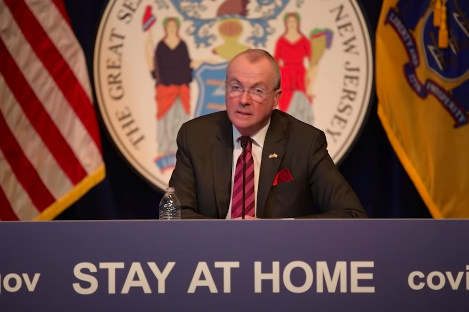 New Jersey Gov. Phil Murphy is encouraging people voting in the July 7 primary to us vote-by-mail ballots the will be automatically sent to all registered Republicans and Democrats. The goal is to limit crowding at polling places because of the COV0D-19 pandemic.

New Jersey will send every registered Democratic and Republican voter in the state a vote-by-mail ballot ahead of the primary election on July 7, at the same time there will be fewer places people can vote in person.

The goal is to minimize the risk of spreading the coronavirus among residents voting in the election, which already had been postponed from its original date of June 2 because of the virus.

"Our goals are twofold: to maximize our democracy while minimizing the risk of illness," Murphy said. "We want everyone to participate in safe and democractic process."

The governor made the change by executive order. New Jersey residents who are registered to vote but are unaffiliated with a party will receive applications to get vote-by-mail ballots.

The ballots and ballot applications will come with postage paid. To be counted, Murphy said, ballots must postmarked no later than July 7, the day of the primary, and they must be received at the county board of elections by July 14 – Murphy's executive order extended that time, which had been two days.

Completed mail-in ballots can be placed in any U.S. Postal Service mailbox. They can also be placed in specific ballot deposit boxes which will be available at post offices and other locations to be set up by counties. Murphy said it was important the boxes be placed in "high density, low income neighborhoods."

The same executive order mandates the number of polling stations per county and municipality, with a binding guidance for what health measures need to be in place at each location. There will be a limited number of polling places open, but at least half of the locations in each county  should remain open, the governor said.

"For in-person voting, we require at least one voting station to be open in each municipality," Murphy said. "Social distancing protocols will be enforced within these polling locations, including the sanitizing of any touch screen voting machines."

On Friday, New Jersey surpassed 10,000 deaths due to COVID-19 since the outbreak began. Murphy said 201 more had people died from the coronavirus, bringing the total to 10,138. There have been 143,905 people to test positive for the coronavirus in so far in New Jersey.