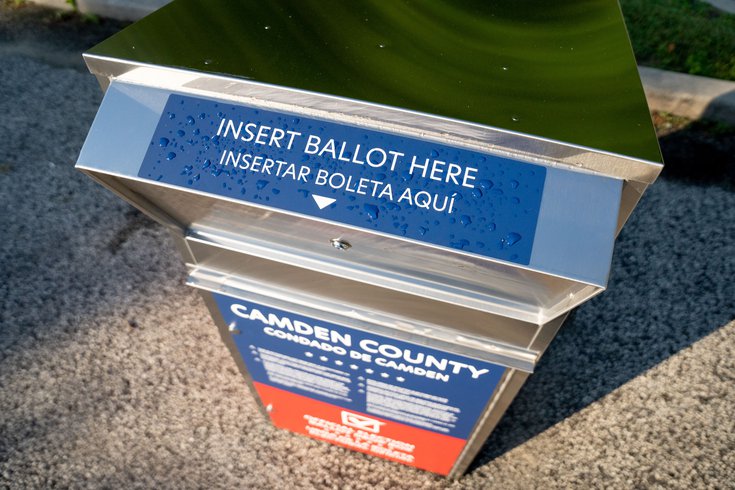 A mail-in ballot drop box is seen at Camden County College in Cherry Hill on primary day in New Jersey, July 7, 2020. Due to the coronavirus pandemic, voters were urged to use mail-in ballots to cast their votes.

Joe Biden is the winner of New Jersey's Democratic presidential primary, while Donald Trump ran unopposed in the state's Republican primary on Tuesday.

New Jersey's postponed 2020 primary election left little mystery in the presidential race, as the Associated Press called the results less than an hour after polls closed at 8 p.m.  Biden also won in Delaware, the only other state holding primaries on Tuesday.

Trump and Biden remain on track for a highly charged contest in the November 3 general election.

Polls in New Jersey have shown strong support for the former vice president, who held a 19.4% lead over Trump in three polls conducted this spring by Rutgers-Eagleton, Quinnipiac and Monmouth University.

The state's 14 electoral votes have gone to Democrats in every presidential election dating back to Bill Clinton's 1992 victory.

Though Biden has amassed enough delegates to secure the Democratic nomination, Bernie Sanders remained on the New Jersey ballot ahead of the Democratic National Convention, which begins Aug. 17 in Milwaukee.

Sanders suspended his campaign in April and endorsed Biden, but still seeks to exert his progressive influence on the Democratic platform.

New Jersey's expanding mail-in ballot system, seen as a strong litmus test for the national election, was put to the test for Tuesday's primary.

At least half of the state's polling places were open for in-person voting, but the vast majority of ballots were submitted either by mail or drop-off. Final results for some primary contests, as in other states, may be delayed by the mail-in count.

As the coronavirus pandemic surges in large parts of the United States, the public health crisis and its economic toll figure to take center stage in November.

Biden, 77, increasingly has promoted plans that would broaden the federal government's response to the COVID-19 crisis. The long-time Delaware senator advocates scaling up testing through a public-private board, ramping up U.S. manufacturing of personal protective equipment, and hiring 100,000 people for contact tracing jobs.

Trump, 74, has prioritized the nation's economic recovery and insists that his administration is responding appropriately to the COVID-19 threat. The White House attributes the growing number of confirmed infections, particularly in states that lifted restrictions early, to increased testing capacity.

Critics of the president contend that the U.S. was late to react to the crisis seriously, resulting in a coronavirus death toll that has far surpassed fatalities in countries that took tougher measures. Federal leadership and messaging on mitigation efforts, such as guidelines to wear face masks, also has become a point of social and political division as states seek ways to reopen their economies safely.

Amid the raging pandemic, Trump has been confronted by widespread civil unrest after the police killing of George Floyd in Minneapolis in May. As protests continued through Independence Day, the president spoke at Mount Rushmore in South Dakota, denouncing "angry mobs," "far-left fascism" and efforts to "erase" American values.

From early May through the end of June, President Trump's approval rating fell from 49% to 38%, according to Gallup.

Yet the partisan divide appears to be historic.

"The current 89-point difference between Republicans' and Democrats' ratings of Trump is the largest partisan gap Gallup has ever measured for a presidential approval rating in a single survey," the polling service said of its most recent analysis.

In challenging Trump, Biden has campaigned on a platform that seeks to enhance the Affordable Care Act with a public option, increase the minimum wage, build a labor-friendly climate agenda and make higher education more accessible for all. He also has called for greater protections for essential workers during the COVID-19 crisis and urged police reform to address systemic racism in the criminal justice system.

The Biden campaign, reacting to Trump's Mount Rushmore speech, said the country is in a dire state under the current administration.

"Our whole country is suffering through the excruciating costs of having a negligent, divisive president who doesn't give a damn about anything but his own gain – not the sick, not the jobless, not our Constitution, and not our troops in harm's way," campaign spokesman Andrew Bates said in a statement.

Nationally, Biden holds an 8.7-point lead over Trump with the election just under four months away, according to an average of polls compiled by RealClearPolitics. His leads include key battleground states, such as Pennsylvania, Florida, North Carolina and Arizona.

Despite the growing momentum, lessons from past elections have shown that Biden and his supporters cannot get overly comfortable in the months ahead.

After Tuesday, only Louisiana, Puerto Rico and Connecticut will have yet to conduct their primary elections in advance of the party conventions taking place during the second half of August.

Biden, who has maintained a relatively low profile in public, spoke in Wilmington late last month and addressed those critics who have questioned his mental sharpness heading into the home stretch of the presidential race.

Read more PhillyVoice coverage of the 2020 Pennsylvania Primary Election below.

In New Jersey's 2020 primary election on Tuesday, a full slate of Democratic candidates battled for the chance to reclaim the U.S. House's 2nd District seat, one their party had lost last year in a stunning turn of political drama. The party's nomination went to Amy Kennedy, the Brigantine mother of five and wife of former U.S. Rep. Patrick Kennedy, has come out ahead of Brigid Callahan Harrison, who has conceded.Continue reading here.

In his first election since joining the GOP in December, U.S. Rep. Jeff Van Drew was victorious in the Republican primary for New Jersey's 2nd Congressional District on Tuesday. The Associated Press called the victory for the incumbent congressmen over his challenger, longtime Republican Bob Patterson. Van Drew moves on to November's general election, where he will face off against Democratic primary winner Amy Kennedy. She was one of five candidates in her party who ran in the primary.

Incumbent U.S. Sen. Cory Booker easily defeated a  challenge from progressive Lawrence Hamm in New Jersey's Democratic Senate primary on Tuesday. The Associated press called the race shortly after 9 p.m. Tuesday night, with Booker winning nearly 90% of the vote in reporting precincts. Booker ended his run for the Democratic presidential nomination in March, turning his attention back to his Senate seat. The former Newark mayor, who won a special Senate election in 2013, was reelected the following year and will now look to win a second full term.

The five Republicans in New Jersey's U.S. Senate primary are vying for the nomination to run against Democratic Sen. Cory Booker in November. They are Tricia Flanagan, Hirsh Singh, Natalie Rivera, Rik Mehta and Eugene Anagnos.

With 33% of precincts reporting on Tuesday, just before midnight, Hirsh Singh and Rikin Mehta had substantial leads over the rest of the field. Singh had received nearly 39% of the vote, and Mehta had almost 37%.

In the New Jersey 3rd Congressional District's Republican primary, David Richter is leading Kate Gibbs as votes continue to be counted. Gibbs, a former Burlington County Freeholder, reportedly conceded the race early Wednesday. The winner of the primary will run against incumbent Democratic U.S. Rep Andy Kim in November. The 3rd District, which encompasses most of Burlington County and parts of Ocean County, was flipped from Republican to Democrat in 2018 when Kim defeated Republican Rep. Tom McArthur.