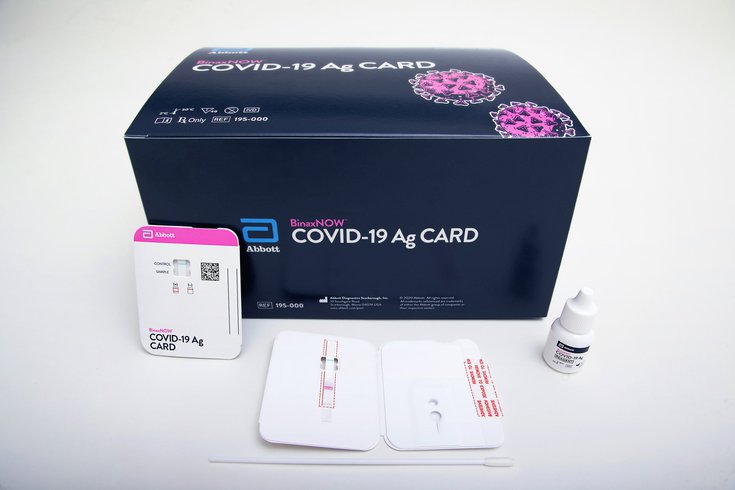 The BinaxNOW coronavirus test only costs $5 and allows results can be read directly from a testing card.

New Jersey will receive 2.6 million antigen tests from the federal government in an effort to roughly double the state's COVID-19 testing capacity in the next three months.

The first 170,000 BinaxNOW rapid tests will arrive within the next two weeks, Gov. Phil Murphy said. The tests produce results within 15 minutes using technology similar to a pregnancy test.

The state plans to use the tests to mitigate potential coronavirus outbreaks, particularly at schools, Murphy said. His administration will work with federal and local officials to determine a distribution plan.

New Jersey's effort to scale up its rapid testing capacity are a result of discussions with the White House last weekend. Murphy called the development a "game-changer."

The U.S. Food and Drug Administration authorized the BinaxNOW rapid COVID-19 test in August. Manufactured by Abbott Diagnostics Scarborough Inc., the test only costs $5 and is the first of its kind where results can be read directly from a testing card.

A health care provider first swabs the patient's nose and then twirls the sample on the card after adding a testing reagent. If one line appears on the card, the test result is negative. Two lines indicate a positive test result.

The test can be conducted at approved point-of-care locations on patients suspected of COVID-19 within seven days of symptom onset.

The test relies on antigens to determine its results, unlike the molecular tests that detect the virus's genetic material. Antigen tests produce faster results, but they generally are not as accurate as molecular tests.

Because of the decreased sensitivity, patients who receive negative test results may need to confirm those results via a molecular test. But the advantage of antigen tests is that they catch positive cases faster, potentially preventing additional people from being exposed to the virus.

Abbot is planning to make 50 million monthly tests by October. The company said it has invested hundreds of millions of dollars into two new facilities to scale up the BinaxNOW test.