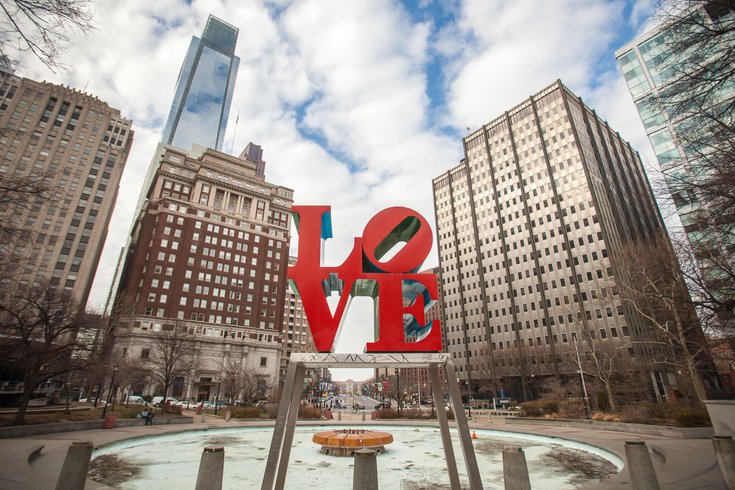 Philadelphia's LOVE Park will reopen to the public later this month following a reconstruction project over the last two years, but its iconic sculpture will be missing for several more weeks.

The famed LOVE sculpture, designed by Robert Indiana, will be reinstalled sometime in early 2018, city officials announced on Thursday. But the sculpture will look a bit different.

The sculpture is being restored to its original color scheme of red, green and purple instead of the red, green and blue that people have viewed for years.

Indiana has created numerous versions of LOVE over the years. But Philadelphia's sculpture is the only version that he painted in purple, according to Margot Berg, public art director for the city's Office of Arts and Culture.

"Singular and unique to Philadelphia, we have even more reasons to love our LOVE and we are thrilled to restore it to the artist's original intent," Berg said in a statement. "The additional time will allow the sculpture's paint to cure properly so that it can withstand the elements for many years."

The change came after Indiana's agent contacted city officials as they worked to restore the LOVE sculpture, which was first installed at the park – formally known as JFK Plaza – in 1976 to celebrate the United States' bicentennial anniversary.

He informed the city of the original color scheme, providing the correct color information needed to repaint it.

After renovations began at LOVE Park in 2016, the sculpture was temporarily relocated to adjacent Dilworth Park. In February, it was removed so conservators could restore the sculpture in time for the park's re-opening.

LOVE Park will welcome visitors during a soft reopening when the annual Christmas Village opens on Nov. 18. The sculpture initially was expected to be reinstalled in time for the opening.

"We realize that the return of the LOVE sculpture to the park is highly-anticipated and we are working to bring it back as soon as possible," Parks and Recreation Commissioner Kathryn Ott Lovell said in a statement.

"Our top priority has been to work with our project partners at InterPark and their contractors to ensure the park is ready to receive the Christmas Village in time for its installation in the next two weeks. However, the return of the LOVE sculpture will not be far behind."

In addition to getting a new paint job, the LOVE sculpture will get a new pedestal.

The park's grand reopening is expected to occur in the spring, when the project is completed. The park is undergoing a $16.5 million redesign that will include a fountain, grassy lawns, scattered trees and better access points.