"I'm with the big players right now," says one student. "To be working alongside the national media is just amazing." 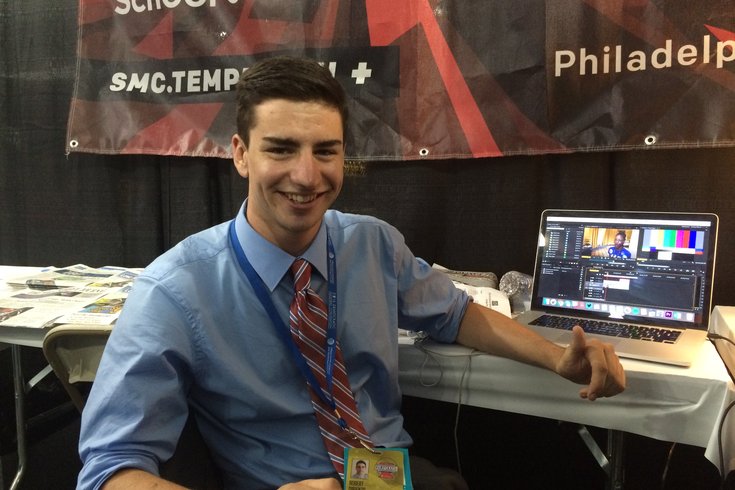 Rob DiRienzo says he happily would have transcribed quotes or other menial tasks for any news organization willing to give him a credential to the Democratic National Convention.

But DiRienzo and 19 other Temple University students have far greater responsibilities this week as part of the Temple DNC News Bureau, a class of student journalists serving as field correspondents for media organizations unable to send their own reporters to Philadelphia.

"I was one of those kids who pretended to be a newscaster when I was seven years old," DiRienzo said. "To actually come out and do this ... I'm with the big players right now. To be working alongside the national media is just amazing."

Thirteen newspapers in the McClatchy chain partnered with the Temple DNC News Bureau. So did seven other digital outlets and broadcast stations.

Many of the students are representing news organizations in northwestern states like Idaho, Montana and Washington.  Others are reporting for outlets in Illinois, Georgia and Florida.

DiRienzo, a senior from Hackettstown, New Jersey, is serving as the correspondent for CBS affiliate KTVA in Anchorage, Alaska. Like most of the student correspondents, DiRienzo has never visited the state he is covering, nor was he well-versed on its political issues.

"During the last couple months I've had to become an expert on Alaskan issues," DiRienzo said. "I've gotten a whole taste of Alaskan life up there. I'm trying to use that knowledge and represent Alaskan media, which is tough, because I've never been to Alaska."

For much of the six-week course, the Temple students researched the issues relevant to their media partner's coverage areas. They also made connections with the delegations they are chronicling all week.

Their responsibilities are to find the localized stories that otherwise would go unreported. They mostly leave the wire services and national television affiliates to cover the keynote speeches and party business.

"While there's certainly no shortage of the national coverage, there are great local political stories to be told in hanging out with delegations," said David Boardman, dean of the School of Media and Communication. "It's where a lot of business gets done on the local level. I just thought we could do a great service for these outlets and our students can have this great opportunity."

"I'm doing a lot more writing and more in-depth reporting. Prior to this, I would write every once in a while for my college newspaper. It would give me really intense anxiety. It would really freak me out. Now, I'm forgetting that I have to take your picture, too." – Jennifer Kerrigan, Temple journalism student and Dresher resident

Boardman, a former editor-in-chief at the Seattle Times, reached out to McClatchy several months ago, seeking to establish a partnership. McClatchy accepted and also participated in a similar venture at the Republican National Convention.

"Those newsrooms wouldn't otherwise have access to the local delegates who are here and also to the multimedia that the Temple students are putting together," McClatchy Washington Bureau Chief Cheryl Carpenter said. "It's a distinctive experience, I would say, for sure. I hope the Temple students have found it enriching also. What Temple was trying to do was get them an authentic experience at the convention and give them a targeted coverage."

Jennifer Kerrigan, a junior serving as a correspondent for the Idaho Statesman in Boise, followed a pair of Idaho delegates to the newly constructed Mormon Temple in Center City – the first one built in Pennsylvania.

"That's a story I've been interested in pursuing," Kerrigan said. "I didn't think it was going to happen, but I knew these two major players in the party were (Mormon). Yesterday, I got a text – 'Hey we're going to tour the Temple. Want to come with us tomorrow?' That was a really cool thing."

Kerrigan, of Dresher, Montgomery County, typically works as a photojournalist. But like all members of the Temple DNC News Bureau, she must submit multimedia packages.

"I'm doing a lot more writing and more in-depth reporting," Kerrigan said. "Prior to this, I would write every once in a while for my college newspaper. It would give me really intense anxiety. It would really freak me out. Now, I'm forgetting that I have to take your picture, too."

Gaining such trust is one of the biggest challenges the students have faced, said Boardman. But the students are meeting it and enjoying the experience of covering a national event.

"The students seem to love it," Boardman said. "We're across from 'The Daily Show.' And they get treated just like everybody else."