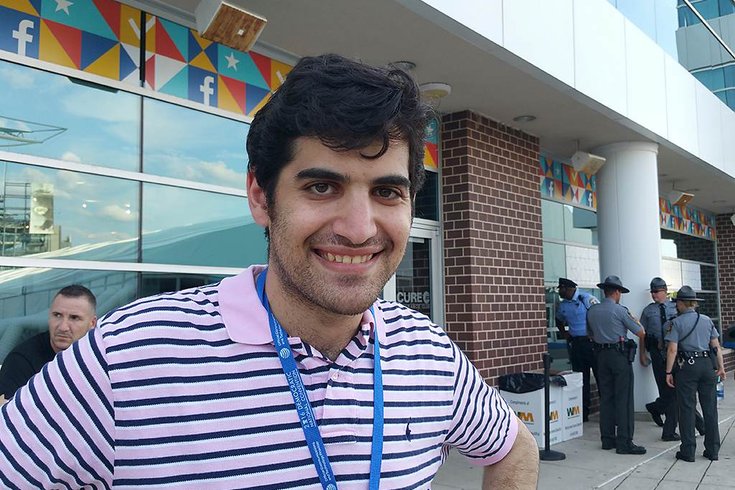 Harry Enten of FiveThirtyEight.com, outside the media center at the Democratic National Convention.

Data and analysis can bear out many things — even elections, and the not-so-crazy notion that Donald Trump can win the presidency of the United States.

Since March 2008, the highly-respected political website FiveThirtyEight.com has had a pretty good track record of predicting how elections will go. Founder and editor-in-chief Nate Silver has assembled himself a staff of insanely intelligent people with keen analytical skills to break down socio-economic demographics — and predict elections.

One of those brilliant minds is Harry Enten, 28, a Dartmouth graduate and senior political writer and analyst, who is in Philadelphia this week for the Democratic National Convention at the Wells Fargo Center.

Enten chatted with PhillyVoice Tuesday evening as the states cast their votes to nominate Clinton.

According to CNN, “That latter finding represents a 6-point convention bounce for Trump, which are traditionally measured in two-way matchups.”

It’s not an impossibility that Trump could win the Nov. 8, 2016 general election, Enten said..

“Sure, if you look at the polls right now coming out of the Republican National Convention, the race is basically tied, in fact, Donald Trump may hold a slight lead if you look at the average of polls,” Enten said. “You see that Trump has gained in his favorable numbers, while Clinton in fact has fallen back a little bit. The question that we still don’t know is whether or not Hillary Clinton gets a bounce coming out of the Democratic National Convention.

“If she does, then she’ll be back in the lead. But right now, it’s a tied race.

"At this stage, I think it’s somewhat surprising. I think it’s surprising in so far as Donald Trump is so unpopular. Most people know who he is and he’s somehow been able to move the numbers a little bit despite that," Enten said. "I’d also point out that the economy while doing decently well is not doing overwhelming well, and President [Barack] Obama has an approval rating of about 50 percent. If you look at the fundamentals, you would think that this is a close race, which is exactly what we have right now.”

How is Trump doing this?

Enten explains the demographic that is pushing Trump are white men without college degrees. It’s a demo that lost to Obama in the previous two elections. Could it be the game-changing demo that puts Trump over the top?

“If you look closely at that CNN poll, you see that most of the other groups are staying about the same in their support for Donald Trump versus earlier this month,” Enten explained. “The real movement is among white voters without college degrees who are moving overwhelmingly toward Trump. These are voters that feel the Democratic Party has left them behind. The Democratic Party has tailored itself toward women and minority groups, and that leaves white men without a college degree feeling like, Hey, where is our piece of the pie and what’s next for us?

“Donald Trump seems to be talking and speaking to them.”

Enten also sees other elements coming into play, like the racial tension nationwide between police and the African-American community. Crime, which has risen slightly over the last year though it is much lower than it was 25 years ago, was a point of emphasis during the RNC.

"She’s going to play up Trump’s vulnerabilities, specifically on an issue like Russia, which is something a lot of white, working class people aren’t fans of in this country." – Harry Enten, FiveThirtyEight.com

“Donald Trump comes out vigorously for cops. This is something we’re seeing across major cities. Donald Trump is appealing to white voters in the same way that [New York City mayor] Bill de Blasio is not, and in New York City, Donald Trump’s hometown," he explained. "You see de Blasio’s approval rate falling, in part because white voters don’t feel de Blasio has control of the situation and isn’t addressing their concerns. What we see in a country that’s become more and more diverse is white voters who still make up a large part of this country. They feel like the Democratic Party is trying to get a hold of the new demographics and leaving behind people who have been here for a long time.”

Clinton can certainly change her course. Enten pointed out how important her bounce will be after the DNC, and her choice of Virginia Sen. Tim Kaine as her running mate could also pay dividends.

“The selection of Kaine is clearly a play toward the center,” Enten said. “He is a white, middle-aged guy and she’s made some concessions with the Bernie Sanders’ camp. Clinton will try to maneuver more toward the center. She’s going to have a huge advertising edge come the fall and she’s going to play up Trump’s vulnerabilities, specifically on an issue like Russia, which is something a lot of white, working class people aren’t fans of in this country.

“If she could exploit that hole and try to bring back the idea when Ronald Reagan said, ‘Tear down this wall,’ while all of a sudden, Donald Trump is buddy-buddy with [Russian President] Vladimir Putin, that will be one particular issue Hillary Clinton will go very hard after in the fall campaign.”