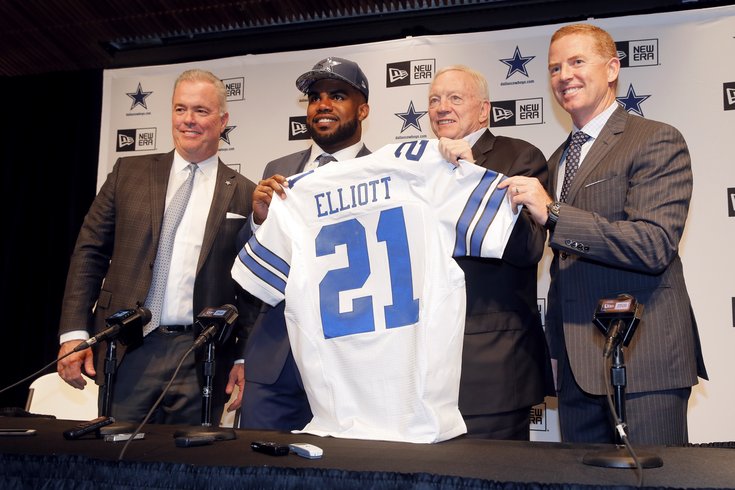 Ezekiel Elliott may very well end up being a good player, but he constituted bad value with the fourth overall pick.

After focusing on the Eagles' draft since Thursday, let's take a look around at the rest of the NFC East, one team at a time, starting with the Dallas Cowboys, who I believe had the worst draft of any team in the division.

The Cowboys reportedly would have drafted Carson Wentz with the fourth overall pick, but when the Rams and Eagles jumped up to picks No. 1 and 2, the top two quarterbacks on the board were gone. With Wentz and Jared Goff out of the way, the Cowboys had to re-shift their attention to a position player.

I've long been on record that Elliott would not have been good value at pick No. 8 before the Eagles traded up to pick No. 2. At pick No. 4, where Dallas landed Elliott, that is atrocious value.

Elliott is really, really good, as is any player who is being drafted in the top 10. This is in no way a slight against Elliott, rather, it's about the value of drafting the position he plays at the fourth overall pick.

Running backs take pounding in the NFL. Their bodies wear down, and even the good ones rarely make it beyond the age of 30. But the bigger issue I have with the pick is that there are an inordinate number of great running backs set to enter the NFL Draft next year. It would be much better value to get a marginally less talented back in the second round in 2017 than Elliott at fourth overall.

How the Cowboys passed on Florida State CB Jalen Ramsey here is beyond me.

At the end of the first round, the Cowboys tried to trade up to select Memphis quarterback Paxton Lynch to be the heir apparent to Tony Romo, but they were boxed out by the Denver Broncos.

At the start of the second round, they reportedly wanted to draft Oklahoma State DE Emmanuel Ogbah in the second round, but he was the taken with the first pick on Day 2. They then turned their attention to Clemson's Kevin Dodd, who again, got swiped out from under them. With their top two targets in the second round gone, the Cowboys had to settle for Smith.

Smith won't play in 2016, which is fine in terms of investing in the future on a player with a regular old ACL tear. Unfortunately, Smith has nerve damage, which is a far more serious an issue, and nobody knows whether his nerves will begin firing again. If Smith has a full recovery, he could be a steal for the Cowboys from 2017 and beyond. However, considering he lasted until the second round, the vast majority of the NFL doesn't see it that way.

Maybe the Cowboys are smarter than everyone. Time will tell.

Collins is thought of as a quick, penetrating interior defensive lineman. However, his production at Nebraska was lacking:

Collins had just eight career sacks, and no forced fumbles. In a draft stacked with DT talent, the Cowboys got a player here they may have gotten in the fourth round.

At the outset of the fourth round, the Cowboys once again missed out on another draft target, quarterback Connor Cook.

Jerry Jones said the Cowboys did in fact try to trade up for Connor Cook. Didn't sound as broken up that it fell through as he was abt Lynch

The Cowboys missed out on Wentz, Lynch, Cook, Ogbah and Dodd. They got played repeatedly in the first four rounds of the draft. Tapper is a nice player who had 50 tackles 7 sacks, an impressive 4 forced fumbles, and 3 batted passes in 2015. He also plays a position of need with Demarcus Lawrence and Randy Gregory facing suspensions to begin the 2016 season. But he's not who the Cowboys wanted there.

Back in November, we took a detailed look at Prescott's game.

Prescott's numbers got better in each new season at Mississippi State, which is encouraging, and he was the unquestioned leader of his team. He has a good short passing game, running ability, and a calm demeanor in the pocket. He also is a pass-first quarterback who will typically only run once his options have run out.

However, he has major accuracy issues in the intermediate to deep passing game, which also happens to be where the Cowboys like to operate.

At the Senior Bowl week of practices, I felt Prescott had a poor showing, where those accuracy issues resurfaced:

Prescott had a rough week, often throwing low, negating any chance for his receivers to get yards after the catch, or just missing them entirely. I believe he likely hurt his stock considerably.

I know a lot of people like Prescott as a prospect, but I felt this was far too early for him, and the Cowboys may have felt they had to reach after missing out on Wentz, Lynch, and Cook.

According to NFL.com, Brown was charged with 17 TDs allowed on 162 targets over the last three years. Oof. He did, however, run a 4.35 40 at the Combine. This is appropriate value in the sixth round, if the Cowboys think they have figured out why Brown's athletic measurables didn't translate to the field.

They go back to that tradition here.

Like Anthony Brown above, it seems the Cowboys were swayed by athletic measurables, as Jackson ran a very impressive 4.35 40 at 220 pounds. At Eastern Michigan in 2015, Jackson carried the ball 208 times for 1078 yards (5.2 YPC) and 14 TDs, which sounds good, but is not ideal production for an NFL prospect at that level of football.

Gathers is 6'8, 275, and scored 11.2 points per game on Baylor's basketball team. He reportedly has not played football since he was 14 years old. I can maybe wrap my head around a great team with little in the way of open roster spots going this route and developing him over a few years, but the Cowboys were 4-12 last year. Maybe just draft a football player?

The Cowboys missed out on a lot of their draft targets, they got bad value with the fourth overall pick, and there's an outside chance their second round pick will never play. With their later round picks, they largely favored potential over production, which is something a 4-12 team does not have the luxury of doing, unless they are truly building for the long-term, which the Cowboys are not.