Week 6 of the NFL season is in the books, and a bunch of the perceived Super Bowl contenders in the NFC lost to bad/mediocre teams. We have one new obituary this week in the Chicago Bears.

The Bears' Thursday night matchup against the Commanders was almost kind of a joy to watch, in that both offenses were comically incompetent. The Bears had three 1st and Goal opportunities in that game, and somehow came away with 0 points.

Entering the season, it was thought that the Bears had surrounded Justin Fields with arguably the worst supporting cast in the NFL, both in terms of offensive line and skill position talent. And, well, they have indeed been awful. Fields has shown flashes of talent, and there's no question that he can make plays with his legs, but it's rare that good things happen when he throws the football. Here's where Fields ranks among 33 NFL quarterbacks with at least three games played:

Whether you want to blame Fields or his supporting cast for those numbers, the end result is that the Bears don't have a functional NFL passing game, which, you know, is an important thing to have in the NFL. 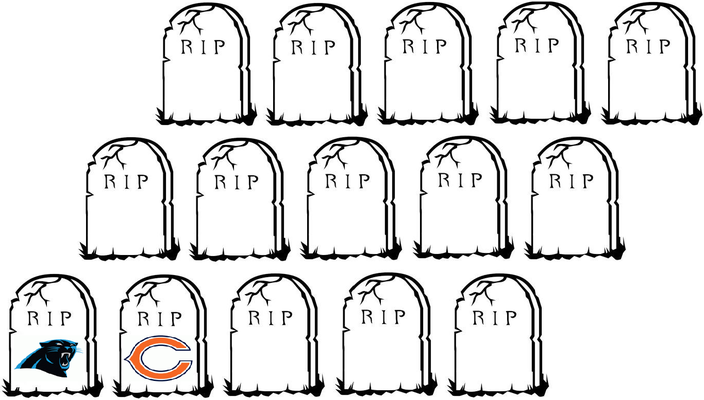 13) Commanders (2-4): The Commanders had a rough Thursday last week. In the morning, ESPN published a story by Seth Wickersham, Don Van Natta Jr. and Tisha Thompson about Dan Snyder, who reportedly is threatening to reveal "dirt" on Roger Goodell and other NFL owners if they try to force the sale of the team. Like so many other recent articles about Snyder, it details various ways that he's a trash human being as well as a wholly incompetent owner.

But it also had some nuggets about Carson Wentz buried within it as well, such as...

Snyder has for years told people close to him that both a new stadium and a true franchise quarterback are silver bullets. "All my problems will be solved if I can just get a marquee quarterback," he told an associate last winter. This past March, Washington traded second-, third-, and conditional third-round picks to the Colts for Carson Wentz, a quarterback who in 2017 appeared to be on the verge of being a superstar but whose fortunes have since sunk. It was a stiff price for a soft-market quarterback -- all familiar marks of Snyder's penchant for overpaying and negotiating against only himself. Sources familiar with the deal say that it was Snyder who pushed for Wentz -- and Commanders football staffers have told people around the league as much. "It was 100% a Dan move," says a source with knowledge of the inner workings of the deal. But in the team's statement to ESPN, Rivera insisted that he had brought the idea of acquiring Wentz to Dan and Tanya, who supported it. "They love this game and this team," Rivera said.

Hearing that Snyder hopes a marquee quarterback will chase away all his problems, an owner laughed: "Carson Wentz?"

The Commanders played a football game on Thursday night against the Bears, and although they won the game, it was still an embarrassing performance by both teams, probably even more so by the Commanders, who largely got outplayed. Postgame, Ron Rivera was asked about Snyder's involvement in the Wentz trade. Here's how that went:

Wentz now has a broken finger on his throwing hand. I might have killed off the Commanders this week, but Taylor Heinicke might actually give them a spark.

Going to be a fun week on here if Jameis Winston and Andy Dalton both miss TNF and Taysom Hill starts at QB and everyone starts him in fantasy at TE.

11) Cardinals (2-4): The Cardinals are one of the most undisciplined teams in the NFL, and on Monday they traded two draft picks for this guy:

If he does that every game they'll win the Super Bowl. #Analytics.

Update: Oops, I'm mistaken. They're 1-1 when he forgets to punt. It's my bye week I'm not writing something different.

9) Falcons (3-3): Marcus Mariota was 13 of 14 for 129 yards, 2 TDs, and 0 INTs as a passer on Sunday. He also ran 6 times for 50 yards and a TD. The Falcons didn't have Cordarrelle Patterson on Sunday, and they still ran it 40 times vs. 14 pass attempts in their win over the Niners. Atlanta has the second-highest percentage of run plays in the NFL this season:

That's a big change from last season, when they ran it 39.1% of the time under Matt Ryan. The Falcons aren't Super Bowl contenders, but they're actually fun to watch under Mariota, and they're capable of beating good teams.

It's not just Matthew Stafford who doesn't look right. The run game is also bad behind this mess of a Rams offensive line that is about to get even worse:

Sources: Rams left tackle Joe Noteboom tore his Achilles’ tendon on Sunday and will be out for the season.

7) Packers (3-3): Aaron Rodgers and Matt LaFleur are talking passive aggressively about each other through the media.

This is probably what he means:

Is this what Rodgers was talking about when he said he wanted to “simplify” the offense? @PardonMyTake pic.twitter.com/suxeTI3Toc

I for one am shocked that Rodgers might have bad relationship with his head coach.

Is there anything more Kyle Shanahan/Jimmy Garoppolo than this drive happening down two touchdowns in the fourth quarter? pic.twitter.com/rjrLaqlV1z

Tom Brady with some words to his offensive line. pic.twitter.com/qBqjD7vfKg

If you skip Wednesday practice every week in addition to a huge chunk of training camp, your past accomplishments can only go so far before your teammates start to wonder if they should give a rat's ass about you reaming them out on the sideline.

4) Giants (5-1): I haven't yet sat down and watched a Giants game from start to finish this season, but I've seen their games in bits and pieces through RedZone channel pop ins, and I've followed along on gamecasts online. In so many of their games this season, it feels like their opponent is just kind of cruising along, and then late in the game they're like, "OH GOD, NO! WHAT JUST HAPPENED?!?" Here's that sentiment in win probability form: 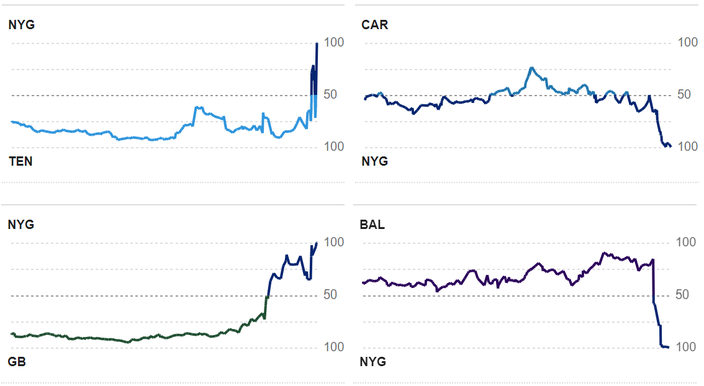 The Giants have lost so many games over the course of the last few seasons because Daniel Jones hated possessing the football. From 2019 to 2021, he committed 65 turnovers in 38 games, or 1.71 per game. This year he has four turnovers in six games, or 0.67 per game.

The Giants don't make big mistakes, they just kind of hang around, and eventually their opponents make "the big mistake." Like this:

Or this on Sunday:

Or the Packers' terrible play calling from 1st and Goal. And so on. You can win games in the NFL by just waiting out your opponent, but you can only do that if you're well coached, which the Giants seem to be for the first time in a very long time.

• 2019: Prescott injured his shoulder in a game against the Rams in December. He didn't miss any games, but he was clearly not himself in a subsequent loss to the Eagles, which cost the Cowboys the division.

• 2020: He suffered a gruesome ankle injury Week 5, ending his season.

• 2021: Prescott's shoulder strain in training camp was a focus of Hard Knocks' coverage of the Cowboys, and he likely would have missed time if that injury had occurred during the season.

• 2022: And then of course in 2022, Prescott broke his thumb, requiring surgery. He has missed five games so far this season.

In the wake of the Cowboys' loss to the Eagles on Sunday night, the overwhelming, but wholly predictable and sad excuse emanating from Cowboys fans has been something to the effect of, "Congrats, you beat Cooper Rush."

To begin, Rush didn't suck a couple days ago when he was 4-0 and was the toast of the town. But also, if he sucks so bad, given Prescott's recent injury history, maybe the Cowboys should have, you know, invested in a better backup quarterback. Having a good backup quarterback can be kind of a big deal, and the Cowboys chose to roll with one who didn't even make their initial 53-man roster out of training camp.

Also, it's funny to me that Cowboys fans are so unaware of recent history that they are making that excuse to a fan base that watched their team win a Super Bowl with a backup.

Obviously, this is a good team and they'll be even better when Prescott returns. But shut up and take your L, Yankees Cowboys fans.

2) Vikings (5-1): The Bears and Lions are done, while the Packers are 3-3 and playing some really ugly football. The Vikings, meanwhile, are 5-1 with a head-to-head win over Green Bay and a 3-0 record in the NFC North. FiveThirtyEight.com has them as 83 percent likely to win their division. They've won four straight — all one-score wins — since getting wrecked by the Eagles on Monday Night Football Week 2.

1) Eagles (6-0): When will the Eagles lose their first game? Here's ESPN's "Matchup Predictor's" chances of an Eagles' victory for each game the rest of the season:

So, you know, they'll be favored in almost every game the rest of the season.