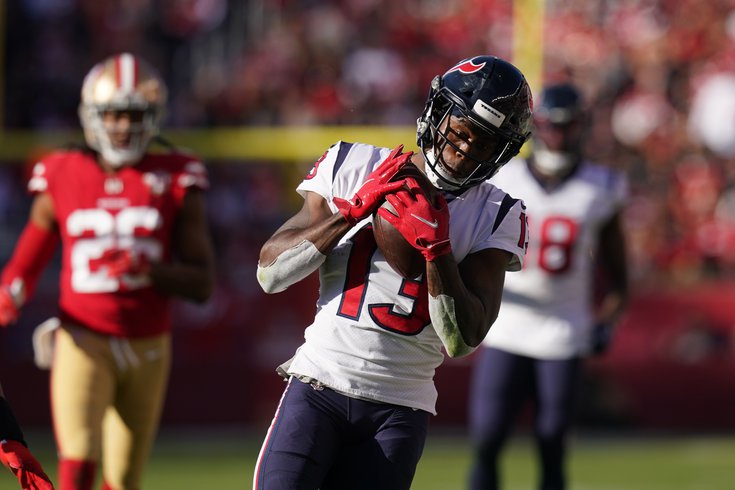 Some big-name wide receivers have changed teams this offseason. Eagles fans would've liked the team to have been in the mix to bring in a veteran, but it hasn't come to fruition yet. A new report from Jordan Schultz indicates that they have, however, "inquired" about WR Brandin Cooks:

I’m told #Saints and #Eagles have also inquired about Brandin Cooks, whose 8,364 receiving yards rank sixth in the league since his rookie season of 2014.

Cooks is somehow only 28, though it feels like he's been in the league forever. He had great numbers in 2021 playing for one of the worst teams in the league with the Texans, going for 90-1,037-6. It was the sixth time in his eight-year career that Cooks topped 1000 receiving yards in a season. Cooks has bounced around the league a ton. If he were to land on a new team this offseason, it would be the fifth team of his career.

This is not the first time the Eagles have showcased interest in Cooks.  According to a report from NFL Network's Ian Rapoport back in 2018, the Birds nearly traded Pro Bowl safety Malcolm Jenkins, a third-round pick and two fourth-round picks to the Saints for Cooks before the 2017 season. Luckily for the Eagles, that deal didn't come to fruition and Jenkins was an integral part of the franchise's first Super Bowl-winning squad. Rather fitting, it was Jenkins who knocked Cooks out of Super Bowl LII with a vicious hit after New Orleans ultimately traded Cooks to the Patriots. What a butterfly effect that would've been for the team and it's an alternate timeline that Eagles fans shouldn't want to think about.

So, does Cooks make sense for the Birds?

The Eagles still have holes at wide receiver. DeVonta Smith turned in a great rookie season and Quez Watkins has performed admirably relative to his sixth-round draft slot, but the unit isn't quite enough to raise the offense's ceiling. It wouldn't be surprising in the slightest to see the Eagles grab another wideout in the first round of the draft for the third-consecutive year. Fans may not like that repeated dipping into the receiver well, but it's time to no longer view Jalen Reagor as some first-round prospect and more so a sunk cost of a pick who should evaluated alongside every WR for production, not pedigree.

Cooks, conversely, is a proven contributor and should still be in his prime for another couple of seasons.

Financially, Cooks has a base salary of $12.5 million in 2022, per Spotrac. With a restructured contract in the event of a trade, that number would certainly be lowered. Cooks has a couple bogus void years at the end of his current deal and would otherwise hit free agency next offseason.

How about a Day 3 pick for him? I'd do that if I was Howie Roseman. Perhaps that type of trade pre-draft would give the Eagles a bit of flexibility so they don't feel forced to take another receiver early just for the sake of filling out an uneven positional group.