NFL Draft: Eagles are one of the teams 'in' on CB prospect Trent McDuffie

McDuffie is billed as one of the top cornerbacks in the draft, capable of being an immediate NFL starter 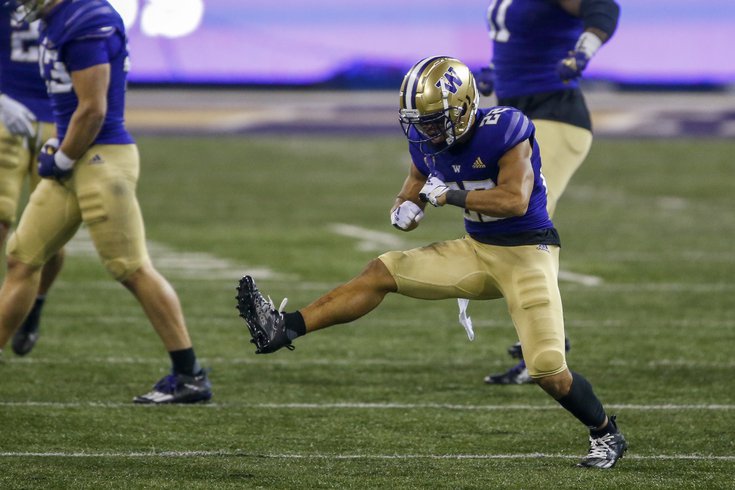 Washington cornerback Trent McDuffie celebrates a turnover on downs against Utah back on Nov. 28, 2020.

Aside from the Haason Reddick signing, the Eagles have had a mostly quiet free agency period. But they still have holes to fill, and with two first-round picks and 10 in total to use at the NFL Draft at the end of the month, they have plenty of chances to try and fill them.

Cornerback is one of the major areas of need, and Washington's Tren McDuffie might be one of the guys who can help solidify the position.

Per NFL insider and analyst Jordan Schultz, the Eagles are "in" on McDuffie along with the Cardinals, Ravens, Saints, and Bills.

.@UW_Football CB Trent McDuffie is a rising star. #Eagles, #Cardinals, #Ravens, #Saints and #Bills all in on him.

I spoke w/an assistant GM about him: “Super smart, shutdown corner. Does everything well. Plays big, covers size and speed. Love how he flys around and tackles.”

McDuffie is projected as one of the top cornerback prospects in the 2022 draft class — he's the No. 2 rated prospect in Pro Football Focus' rankings for the position —and is expected to be taken within the top 20 come April 28.

After the pick-swapping trade with the Saints on Monday, the Eagles have picks No. 15 and No. 18 in the first round. Last month, Bookies.com projected +500 odds for McDuffie to be taken with the 15th pick.

At 5'11" and 193 lbs., McDuffie is of a smaller stature, but his instincts and technique are that of an immediate NFL starter, writes USA Today's Natalie Miller.

From her scouting report:

"McDuffie is one of the most naturally gifted corners in this year’s deep class. While he may not be the biggest player in the group, McDuffie’s instincts and technique are off the chart. He plays with a unique confidence, unafraid of getting beat, and a willingness to stick his nose into the ball with excellent closing speed. He trusts his skill set, and it shows up on tape.

He excels in tight press man coverage, with enough athletic ability to wrap defenders off the line, and awareness to play the ball down the field. He is an absolute technician at the position. He rarely gets beat off the line, and has a fantastic ability to mirror receivers and match them down the field. He has all the tools to succeed in zone coverage, as well, as he is excellent at baiting throws and closing quickly to secure picks and batted balls." [The Draft Wire / USA Today]

Darius Slay, Zech McPhearson, and Avonte Maddox are the corners at the top of the Eagles' depth chart right now, and with safeties K'Von Wallace and Anthony Harris, they fill out a secondary that PFF graded middle of the pack in 2021. There's plenty of room to grow.

Monday's trade with the Saints likely changed up the plans a little bit now that the Eagles have one less first-round pick. In his last version of the Eagles mock draft from a couple weeks ago, our own Jimmy Kempski had the Eagles taking Pitt QB Kenny Pickett at 15, Georgia DT Jordan Davis at 16, and Ohio State receiver Chris Olave at 19.

Schultz also reported last week that the Eagles are one of the teams interested in free-agent safety Tyrann Mathieu, who would bring a Super Bowl and All-Pro pedigree back into the defensive backfield after it was lost with the departures of Malcolm Jenkins and then Rodney McLeod.

Still, a lot to look into and consider for Howie Roseman and co. over the next few weeks.