ATV rider, 29, dies after crashing into car in Northeast Philly

City officials have sought to deter the use of illegal ATV and dirt bikes, but efforts to create a dedicated course have stalled 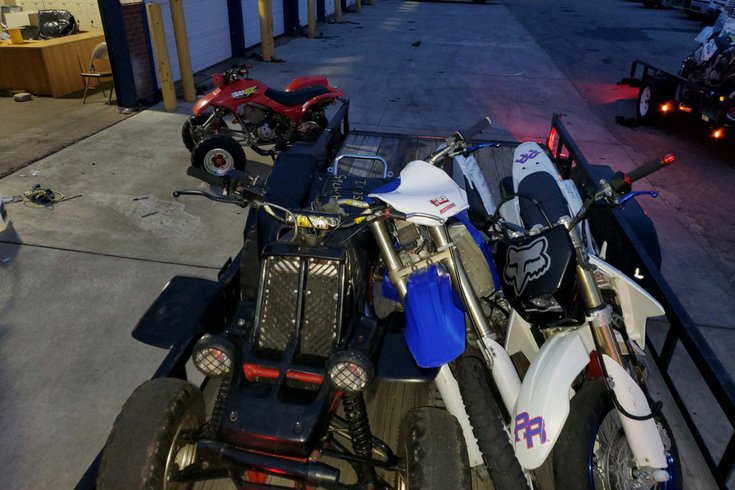 ATVs and dirt bikes are illegal to ride on Philadelphia streets, but remain prevalent on roads throughout the city. Two fatal crashes involving these vehicles happened this week, resulting in the deaths of a 29-year-old woman and a 17-year-old boy. The photo above was shared by police last year and does not depict the bikes in the recent crashes.

A woman riding an ATV in the wrong lane was killed Thursday night in the Holmesburg section of Northeast Philadelphia after she collided with a car as she tried to return to the correct lane, police said.

Victoria Rose Walker, 29, was part of a group of ATV and dirt bike riders that was traveling north in the southbound lane on the 7900 block of State Road around 9 p.m., police said. She was trying to enter the northbound lane to avoid oncoming traffic when her Yamaha ATV collided with a 2018 Kia Rio.

"It appears at this point that this 29-year-old female was driving her ATV, which is not street legal, with at least 5 other dirt bikes and other quads and they were in the southbound lane going northbound when they crossed into the northbound lane. That’s when they were struck with this northbound vehicle," PPD Chief Inspector Scott Small said.

ATVs and dirt bikes are not legal to ride on Philadelphia streets, but have become commonplace across the city — with riders often traveling in large groups during the warm months of the year.

Philadelphia police have a no pursuit policy for ATV and dirt bike riders. The department conducts regular operations to seize these vehicles and identify where they are stored. Enforcement on Philadelphia streets is minimal, and new strategies to deter the use of these vehicles have not emerged despite public frustration mounting over the nuisance and dangers they pose.

Last year, City Council moved to close a loophole in the traffic code to impose the same penalties for the illegal use of ATVs, dirt bikes and dune buggies on city streets. By law, all vehicle types are now subject to a $2,000 fine and confiscation.

Some councilmembers had been exploring the idea of opening a dedicated course for these vehicles in Philadelphia, even touring a possible site in Southwest Philadelphia last year, but progress on these plans has not been made public. Technical hurdles — such as park ownership, vehicle registration and transporting the vehicles to a park — have been noted challenges to moving forward with the idea.

Philadelphia District Attorney Larry Krasner argued last year that a practical distinction should be made between reckless behavior on these vehicles and otherwise safe use of them that doesn't conform with the law.

"There are people in the dirt bike and ATV culture, there are people who ride motorcycles, who are good and law-abiding people," Krasner said last June. "And to the extent they are doing something that is a traffic violation, that needs to be addressed, but that is not the same thing as people whose conduct is endangering and is lawless, and whose conduct must be addressed more directly as a crime."

On Sunday, Jesus Gomez Rosario, 17, was killed in a hit-and-run crash involving a dirt bike rider traveling at a high speed in the Fairhill section of the city. Rosario, a student at Esperanza Charter High School, was riding a skateboard at the time of the crash.

Investigators released surveillance footage in an attempt to locate the dirt bike rider, who police said had been doing wheelies prior to colliding with Rosario around 10:30 p.m. in the middle of Allegheny Avenue near Front Street.

The dirt bike rider left the scene with the bike and appeared to have minor injuries, police said. The dirt bike was described as having green wheels, a green body and damage to the left side.

Investigations into the incidents on Sunday and Thursday are active and ongoing with PPD's Accident Investigation Division.