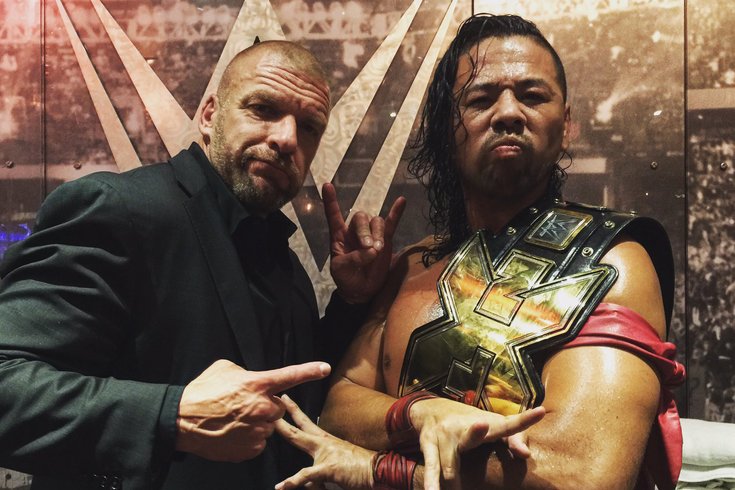 One year after what could be considered the best show NXT has ever put on, the developmental brand – which has really surpassed that and become a third brand of WWE in the eyes of money – returned to Brooklyn, N.Y.’s Barclays Center one day before Sunday’s SummerSlam event to up the ante for the main roster one more time.

The card was stacked with three championship matches, and the undercard didn’t disappoint, either. TNA alums Bobby Roode and Austin Aries, along with newcomer Ember Moon, really impressed the audience, including myself, in their respective matches.

Here’s the rundown of what went down in the Barclays Center on Saturday night:

Austin Aries vs. No Way Jose

This was sort of an old-school type of feud heading into Saturday night’s match between Aries and Jose. Since debuting in NXT, Aries was cheered mostly and didn’t show much personality. He turned on No Way Jose a few months ago while they both were dancing – the meanest thing a pro wrestler can do at any moment, apparently. That really turned a lot of fans on him.

But overall, Aries is loved by most wrestling fans. No Way Jose is a relative newcomer and most of the WWE audience, even NXT patrons, aren’t that enthralled with the guy.

But given the entire storyline, I thought this would end up with a big win for No Way Jose to begin his ascension into more important matches. But that wasn’t to be.

Aries showed what a true ring veteran he was and was able to lock in the Last Chancery and No Way Jose had to tap out.

Your winner by submission: Austin Aries

I’m not sure where No Way Jose goes from here, but we now know what Aries’ next feud will be. Hideo Itami made an appearance after the match as Aries kept attacking Jose.

Itami laid out Aries with the GTS and everyone went home happy. About two hours later.

Billie Kay was fed to Nia Jax on a recent episode of Raw, but that’s supposed to all be in the past as she took on Ember Moon in her WWE debut on Saturday night.

It wasn’t a good night for Kay.

Moon showed that she was ready for the big show spotlight and had a fantastic match with Kay. A lot of credit goes to Kay, as well, for being maybe the perfect opponent for Moon to debut against.

Moon ended the match with a fantastic finishing move. She hit Kay with a twisting stunner off the top rope that had me rewinding immediately just to make sure I saw it correctly. It’s a fantastic move as long as she can execute it perfectly each time and not get anyone seriously hurt.

Your winner by pinfall: Ember Moon

I’m looking forward to her ascension in the NXT women’s division.

I’ll tell you one thing – if you didn’t like Roode’s entrance, you have no soul.

OK, maybe that’s going a bit too far, but still. Roode’s entrance is up there with some of the best I’ve seen in professional wrestling. The whole “GLORIOUS” thing is perfect for him, too. He already feels a thousand times more important in NXT than he ever did in TNA.

And I kind of felt bad for his opponent. Almas is very good, and he showed what he can do in the ring on Saturday night against Roode. But it was The Roode Factor that left the biggest impression on me.

From the entrance to the theme music to having his own stage lower him from the top of the set to the bottom, everything about Roode’s in-ring debut was pretty great. Almas is a good worker and he kind of got lost in the shuffle with all of the GLORIOUSNESS that Roode was bringing, and he could have easily packed it in because it “wasn’t about him.”

Almas didn’t do that. He made Roode look good. And that’s what in-ring debuts are all about.

The only thing Roode needs is a new finisher. A regular pump-handle slam isn’t getting it done for me, even if they do call it the Glorious Bomb.

Your winner by pinfall: Bobby Roode

This was the best match on the card and really showcased what tag team wrestling is all about. Dash and Dawson have improved by leaps and bounds since I first began watching them, and they were the perfect team to foil Gargano’s and Ciampa’s chance at NXT tag team gold.

The Revival is the perfect heel team. They’ve got the basics down flat and make it look so smooth and fluid that sometimes I didn’t even notice. And that’s the best part.

From preventing the tag by pulling the partner on the apron down to the outside to putting the other’s foot on the rope at the last second to avoid a three-count and lose the titles, everything about Dash and Dawson is spectacular.

And everything about Gargano and Ciampa is spectacular, also.

The one problem I have with the finish is that Gargano was too close to the ropes to not even try to grab them. Yes, it’s easy for me to sit here and say that, but look:

Gargano easily could have grabbed the rope especially considering he was moving pretty well using his arms while his legs were in that submission hold. It reminded me of 1997’s In Your House: Ground Zero event when Bret Hart defended the WWF Championship against The Patriot. All he had to do was, you know, stretch his arm out.

Alas, Hart won via submission and we didn’t hear from The Patriot again. In reality, he tore his triceps and WWE released him in early 1998. But I digress.

The match was perfect. The finish would have been perfect if it was in the middle of the ring. But if that’s the only thing I can complain about in regards to this match, then those guys did a damn fine job. Easily the best match of the night.

Your winners by submission and STILL NXT Tag Team Champions: The Revival

Saturday night marked the one-year anniversary, for all intents and purposes, of Bayley’s first-ever NXT championship, as she defeated Sasha Banks to become the NXT Women’s Champion in the same venue one year ago.

It was probably one if, if not the best, women’s matches I’ve ever seen.

Did I think Asuka and Bayley had a chance of having a “Match of the Century” candidate like we saw one year ago? Not a chance. But these two women made the discussion in one of the best women’s matches of the year.

Asuka is a star, and will remain a star for as long as WWE wants her to. She’s a no-nonsense, get in your face, bonafide superstar. And there was no chance, I thought, that Bayley had to regain her women’s championship, which she lost to Asuka back in April.

Bayley made it close, though. She wrestled a great match and made it believable that she could defeat Asuka and become the first two-time NXT Women’s Champion ever. But, that wasn’t to be.

Asuka is a striker and nailed the former women’s champion with a kick to the head for the win. Asuka overcame a Bayley-to-Belly suplex after Bayley overcame the Asuka Lock. It was a fantastic finishing sequence and now I’m pretty sure nobody’s ever going to beat Asuka.

Your winner by pinfall and STILL NXT Women’s Champion: Asuka

After the match, Bayley made her way around the ring and hugged Sasha Banks and Becky Lynch who were seated at ringside, and also hugged Charlotte to some boos. I guess that means Charlotte is a really good heel in 2016, which is hard to do.

She then hugged her superfan Izzy before pointing to the NXT sign on the entrance ramp as she disappeared backstage. We may have seen the last of Bayley in NXT, and that’s a great thing. She needs to be on the main roster now.

Triple H didn’t waste much time getting some gold onto Nakamura after bringing him in earlier in the year. Nakamura made his debut at NXT TakeOver in Dallas before WrestleMania in what could be considered a Match of the Year candidate against Sami Zayn. He then had a tremendous battle with Finn Bálor on the July 13th episode of NXT.

And before his match with Joe on Saturday night, NXT pulled out all the stops to really make this feel like their WrestleMania for a second year in a row.

Nakamura’s entrance was out of this world awesome. Lee England, Jr. was the guy performing on the violin, and he talked about it after the show.

Back to the match. Nakamura and Joe couldn’t have put on a better match if they tried. The psychology and toughness both men possessed with the crisp moves and false finishes were absolutely phenomenal.

With Joe reversing a triangle choke into a Texas Cloverleaf submission hold, is truly showed Joe isn’t just being cast as a brawling badass. He’s a technical mastermind, as well. Joe locked in the Coquina Clutch, but Nakamura got out. Joe was able to lock it back in, but Nakamura got to the ropes.

Joe hit Nakamura with the Muscle Buster, but the showman kicked out at 2.999999999999. Eventually, Nakamura hit Joe with the Kinshasa, and Joe kicked out. It was amazing to watch. Nakamura, a man possessed, hit Joe with a knee to the back of the head and then another Kinshasa to finally put Joe down for the three and win the NXT Championship.

It looked like Joe may have been shaken up after taking a knee to the jaw, but he finished the match as the referee made sure everyone knew something was seriously wrong. He was helped backstage, leaving Nakamura to celebrate his newly won championship in the ring by himself.

Your winner by pinfall and NEW NXT Champion: Shinsuke Nakamura

#KINSHASA x 2!!! We have a NEW @WWENXT Champion!!
Congratulations to @ShinsukeN!! #NXTTakeOver pic.twitter.com/vuIp5cwx37

The two biggest champions on the brand are Japanese, and with that comes tremendous opportunity to grow globally and really sell NXT for the first time internationally. Having both Nakamura and Asuka as world champions on the NXT brand means big things are in store for the future of WWE’s third brand. And I can’t wait to see what happens.