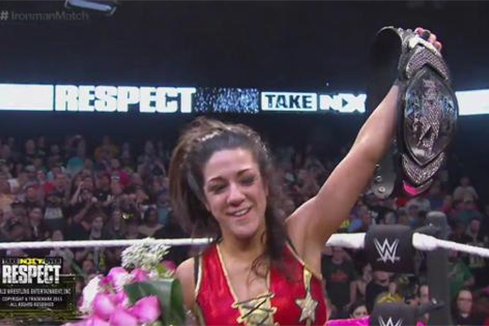 The first ever NXT Iron Woman Match was one to remember between Sasha Banks and Bayley.

Women’s wrestling has taken on a whole new meaning not only in NXT but across professional wrestling in general. Some of the best pro wrestling cards you’ll see nowadays are featuring women in highly prominent spots on the card, and even the main event.

Wednesday night, Oct. 7th, 2015, that dream that once was not even thought of as being close to a reality became just that, as Bayley and Sasha Banks main-evented NXT TakeOver in Orlando in a 30-minute Iron Woman Match.

We could only leave it to our imaginations leading up to this match as to how these two stars would outdo themselves from their match in Brooklyn in August. It seemed nearly impossible. I thought they would come close, but not surpass their epic clash from two months ago.

Well, Bayley and The Boss just might have surpassed it. I still think their match in Brooklyn was one of the best I’ve ever seen live, but Wednesday night’s main event may be on par with their previous match. It’s an absolute must-watch if you haven’t seen it yet.

Here’s what happened in Orlando on Wednesday night:

I don’t think there was any doubt in anyone’s mind who would come out of this match victorious. Bálor and Joe are a dream tag team and Dawson and Wilder should have been excited to just be in that spot.

It was a great opener, but that’s no surprise when Bálor and Joe are involved. Dawson and Wilder also looked good, and the favorites to win the tournament came out on top again, albeit in interesting fashion.

Bálor was selling a leg injury but pleaded to enter the ring at the end, with Joe eventually obliging despite not wanting to since he had the victory well in hand. After the Coup de Grâce by Bálor, it was academic. Bálor and Joe were heading to the Finals.

This match had a deeper meaning than just a tournament semifinal, however. It looked pretty obvious that it planted the seeds for an eventual heel turn by either Bálor or Joe.

With Bálor’s insistence in getting tagged in to hit the Coup de Grâce for the win and Joe’s reluctance and eventual realization that he shouldn’t have done that since Bálor’s leg was in really bad shape has set the stage for the immediate future in NXT. I half expected a heel turn by one of them on Wednesday night, but I always enjoy a slow burn in professional wrestling where the audience can follow bit by bit until the eventual climax. I think that’s what we’re getting here.

Rhyno and Baron Corbin vs. Chad Gable and Jason Jordan

Clearly this match couldn’t compete with the opener, but as a tournament semifinal match, it definitely aimed to be good – and it was. This was a good back-and-forth encounter, but I don’t think anyone bought Gable and Jordan ever winning.

The finish came when Gable failed in a corkscrew DDT attempt and Corbin countered with the End of Days for the win.

Your winners: Rhino and Baron Corbin

Of course this match was all about building up Asuka to get the crowd acclimated to her since this was her first match since signing with WWE. Formerly Kana in Japan, Asuka was very impressive in her debut and the women’s division in NXT may never be better than it is right now.

And that’s not just because of Asuka’s performance. Brooke had a very good showing and matched Asuka throughout the contest, so this may have been just as much about her showing as it was Asuka’s. After a fantastic sequence, Asuka locked in the Asuka Lock for the submission victory.

Put yourself on notice. @WWEAsuka is here. #NXTTakeOver: Respect pic.twitter.com/iaEsJ3cT9W

Breeze continues to get shafted despite being a good in-ring performer and character on the NXT brand. Sadly, this might be his peak as if he ever gets called up to the main roster, I can’t see anything but an Adam Rose type run for him. I hope I’m wrong.

Crews continues to impress, as well. He’s a bigger version of Neville, and Neville has adapted very well to the main roster – he just doesn’t have creative helping him very much. Crews could very well be an impact player on the main roster in 2016. He gets the win here with a powerbomb.

With Bálor’s knee injury obviously not healed in time for this match, the story of this bout was trying to limit his time in the ring. That didn’t happen. Rhino and Corbin took it to Bálor’s knee much of the match until he was able to make the hot tag to Joe.

Joe would hit the Muscle Buster on Rhino after tagging Bálor, who hit the Coup de Grâce for the tournament win.

No storyline developments here. WWE did what was right here and left the moment to the memory of Dusty Rhodes and his two sons.

And then it was time for the big one.

We thought the feud between these two ended in Brooklyn, but Triple H gave us (well, me) a birthday gift this year in signing this Iron match between two of the best women’s wrestlers in the world today.

This match had it all. Fantastic psychology, great heel work by Banks and a fantastic ending made this match rival the women’s five-star match from NXT: Brooklyn in August.

It looked like the champion pinned the challenger with a rollup, but Banks was able to get her feet on the ropes to break the count. A few moments later while the ref’s view was blocked, Banks raked Bayley in the eyes and pinned her.

Not long after, Bayley was able to hit the Belly to Bayley suplex on Banks, pinning the challenger to even up the match.

The two fought to the outside of the ring and Banks whipped Bayley into the steel ring steps in a sick sequence. With Bayley’s family sitting at ringside along with Bayley’s biggest fan, Banks heeled it up in fantastic fashion, and in a way we just don’t see any more on television.

.@itsBayleyWWE just got counted out much to the dismay of her #1 fan Izzy! @SashaBanksWWE leads 2-1... #NXTTakeOver pic.twitter.com/Q4OwNJfbUm

Bayley would be counted out and Banks would capture the fall.

The crowd at Full Sail University began chanting “women’s wrestling!” and I may or may not admit I was doing the same in the comfort of my own home. With less than a minute remaining, Banks locked in the Bank Statement and it wasn’t looking good for the champion. That was until she was able to counter.

Once again, NXT proved that if the future looks anything like this, we’re in good hands. With how infuriating the main WWE shows have been recently, it’s great to have a product like NXT to turn to, even though it’s under the same company umbrella. It honestly doesn’t feel like it is, and the action inside the ring and the stories are just so much better than what we see on the USA Network each week. It’s a double-edged sword.

But, hell, that’s a sword I’m willing to fall on each week.