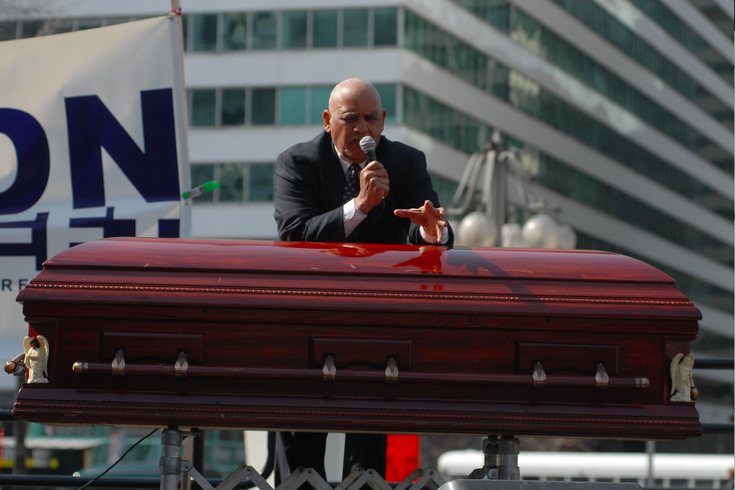 A decade ago today, Philadelphia bared witness to a surreal political moment the likes of which have not since been matched. That's saying something considering America’s current state of affairs.

At high noon on March 1, 2007, T. Milton Street Sr. strode atop a stage near the northwest corner of Dilworth Plaza. He had predicted 5,000 people would be there to witness his political “revival,” but only about 100 people showed up, and many of those were reporters.

It was a time when Street – brother of the city’s then-mayor and a mayoral candidate himself – was feeling the heat of a federal investigation that would soon become a trial that would cost him some time behind bars.

Did I mention that he had a coffin on stage with him? That’s a pretty important detail, too.

Anyway, after fending off a heckler who accurately predicted he’d soon be going to jail, Street declared, “All I ask for is respect. I didn’t just drop out of a tree and say I want to be mayor. I have a history in this city. If you don’t think my ideas are any good, give me a better one!”

That's when – with an accompanying organist – Street broke into song. Seemingly out of the blue, he just belted out his version of Mahalia Jackson’s “If I Can Help Somebody.”

It was, simply put, my favorite day as a journalist in Philadelphia.

If you haven’t seen it yet, here’s a video that captured the moment for posterity’s sake:

Sure, Michael Nutter would go on to win the mayoral primary and general elections that year.

And sure, Milton Street – who dropped out of the mayoral race shortly thereafter for an unsuccessful bid for City Council in an at-large field that featured his nephew Sharif – would do some federal time for tax shenanigans in the following years.

But that March 1 event left an indelible mark in Philadelphia history. (Here’s my story from the CityPaper’s website that day.)

Considering today is the diamond anniversary of that event, I reached out to a few people who were there to share their recollections:

I remember the day fairly well. Milton Street had put out some sort of announcement that he was going to have a lunchtime "event" at City Hall. He’d been acting kind of outrageously for a few weeks at least, and I was more than mildly curious as to what was going to happen.

Michael Nutter, around that time, had called Milton Street “a bad joke that symbolizes much of what is wrong with Philadelphia.” I didn’t have an assignment, but I went down anyway to take photos.

This was back in the day when nobody actually thought that covering a joke candidate could lead to them winning.

Between the crowd and the stage were just about every Philly media person I’d ever met. It looked like the Pen & Pencil club had just closed.

The fact that Mr. Street had a coffin on stage with him wasn’t the strangest part of it. I mean, it’s not the weirdest prop you could have with you if you wanted to make a point about school violence.

What made it really surreal was the guy he had playing an electric piano — like totally "Mr. Roger's Neighborhood" completely inappropriate whimsical electric piano music.

And then Mr. Street gave a rambling speech which turned into, as best I can describe it, a very emotional sermon and then, as if it couldn’t get stranger, he burst into song.

He sang Mahalia Jackson’s “If I Can Help Somebody,” blasted it out with this crazy electric piano accompaniment, full tilt like he was on stage at the Forrest Theater. This culminated in him collapsing onto the coffin.

I seriously wasn’t sure how to react. After his speech ended, he went to the side of the stage and was mobbed by the press. It was like a scene from a movie with 20 microphones shoved in his face and he seemed really happy.

Ultimately, it was a somewhat uncomfortable experience.

To this day, I have no idea if Milton Street pranked everybody for attention or if he was going through something I should have been treating less like a circus and more like a car crash. 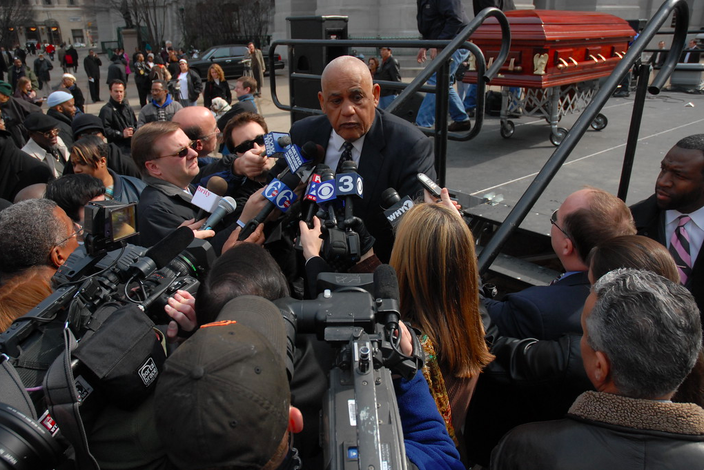 Members of the Philadelphia media had a lot of questions for Milton Street after his 'coffin press conference' on March 1, 2007.

My perspective is a little different. My first memories of Milton Street as a kid were the theatrics, the drama he would use to make a point.

City Council, around 1975, was considering a bill (in which they were) trying to push limits on how vendors operate in city. So, Milton tears (the bill) up. All the pieces are all over the table. He made his point!

There was another time when he was sitting on top of taxi cab. You got to understand, at that point, I didn’t see much of a difference between him and Muhammad Ali. He’s on top of a cab, with cab drivers all around him, and he’s speaking on a bullhorn.

Every time, on TV, it would be Milton and (Frank) Rizzo face to face. Rizzo was big. Milton is big, too.

Even when he went to (the state) senate, he had a tent out on a Harrisburg lawn protesting the accommodations they gave him.

I see him as always wanting to bring attention to issues he considers important.

The point he was making that day is that too many young people are dying because of gun violence. He said I want to make this point, so that’s where the coffin came into play.

He used to say he wanted to get all the funeral homes to have hearses lined up and go through the city as a way to protest the violence.

When that (coffin press conference) happened, he was under a lot of heat with the investigations. He was accused of a lot of things, but not convicted of any corruption. When you’re going through all that, you don’t know how you’re going to come out of it, though.

I think what he intended was to highlight simply what needed to be done with gun violence, and his own emotions took over for him to break out in song.

He did that at one of my aunt’s funeral. When making remarks, he said they had a deal that the living one would sing at the other’s funeral. So, he sang, “Ring Those Golden Bells.” It broke up what had been a very depressing time for everyone.

When he told me he thought he wanted to run (in 2007 despite the ongoing investigations), I asked if he was sure that he wanted to do that.

I asked him, “Would you feel more comfortable helping somebody more quietly?”

I think when that happened, it was the emotion of the moment. He just got swept up in it, and has a flair for the dramatic. 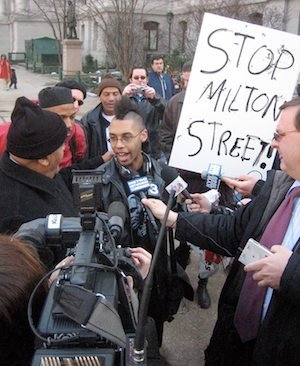 Milton Street talks with candidate and foe Larry West at the 'coffin press conference' as a certain writer named Brian Hickey stands in the background taking a photograph.

That was a bizarre day. Milton was on the Dilworth side, standing on a riser, leaning over top a casket.

His event was part sermon, part political stump and a lot of showmanship. The punk-rock candidate for mayor, Larry West, was off to the side with a sign that read "Stop Milton Street."

All I remember thinking was that this event was amazing.

I was kind of rooting for Milton, except for the fact that he likely lived in New Jersey and had a whole lot of baggage with him. He put on a hell of a show, though. I was fairly stunned.

And then Milton confronted Larry West, who remained defiant.

He ended his mayoral bid shortly after and ran for council-at-large. He told me he wanted to legalize marijuana to make cash for schools.

In February of 2007, I decided to run for mayor. I think it was on the 28th that I talked a friend of mine to film a video of me giving my announcement speech and I think I had uploaded it on YouTube.

I heard Milton Street was going to hold a rally at City Hall, so I decided to just do the only thing you should do when a corrupt guy tries to run for office: protest.

I went down to the Utrect (art supply store) around Broad and South, got a piece of foam board and a tube of black paint (no brush) and just made a sign in the Broad Street concourse. I ran down to City Hall, hoisted the sign, and just thought I would stand there to protest.

The next thing I know a bunch of reporters came up to me and the first question I was asked was, "Who sent you?"

"No one sent me, I'm Larry West, I'm here to protest and I'm running for mayor."

I'm standing there in my Guns 'n' Roses leather jacket, taking all these questions, and all of a sudden Milton comes down and puts his arm around me, has this massive smile, and asks, "Why do you hate me?"

"Because I don't think you should be running for office."

At that point I wound up talking to a few people, most notably Joey Sweeney of Philebrity, who filmed the whole thing.

That was an all-time best political event in a mayoral race. It was unusual, but it was classic Milton Street.

Milton was performing, and he knew how to appeal to voters, how to get their attention, and the media appreciated that. Milton never tried to be careful about what he was saying, and we loved that kind of stuff.

The problem was that he a) didn't understand state law and how it applied to running for office or b) he did understand it and just didn't give a s***.

He was one of the most unusual elected officials in the history of Pennsylvania.

He was elected to the state senate as a Democrat, from a 100-percent Democrat district and he just jumped over to the Republican side (in the 1980s)? It's just insane to think about it, how he was living in New Jersey probably but kept running for office in Philadelphia.

Didn’t respond to a request for comment for this story beyond texting that the idea for it was "hilarious." 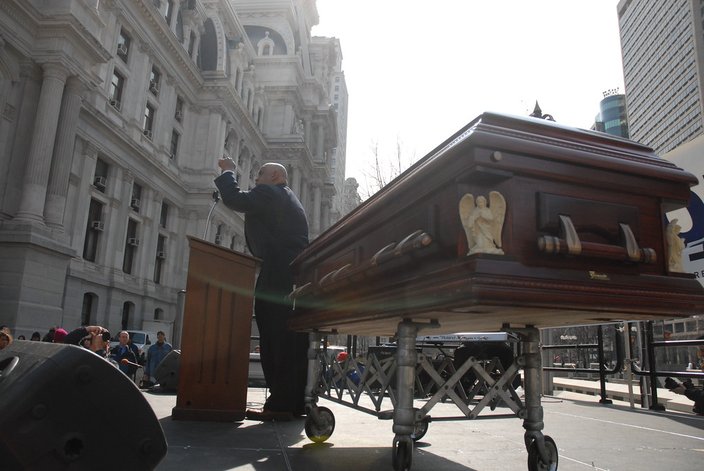 Milton Street said the motivation for his 'coffin press conference' was to draw attention to deaths via gun violence throughout the city of Philadelphia.

Off the record, I suggest a plaque at the site to mark this for future generations.

I don’t remember the names of the people who were on stage with me that day.

A lot of people try to chalk that up to me being crazy, being looney. They said it was a crazy, looney press conference and everything like that.

But I had an important message that day.

It was about so many people dying unnecessarily in gun violence on the streets.

Check out how many people have died since then, and you’ll see I had a point.

Between the coffin rally and last weekend, Philadelphia Police Department records state that there have been 3,015 homicides in the city, the vast majority of which are gun-related deaths.