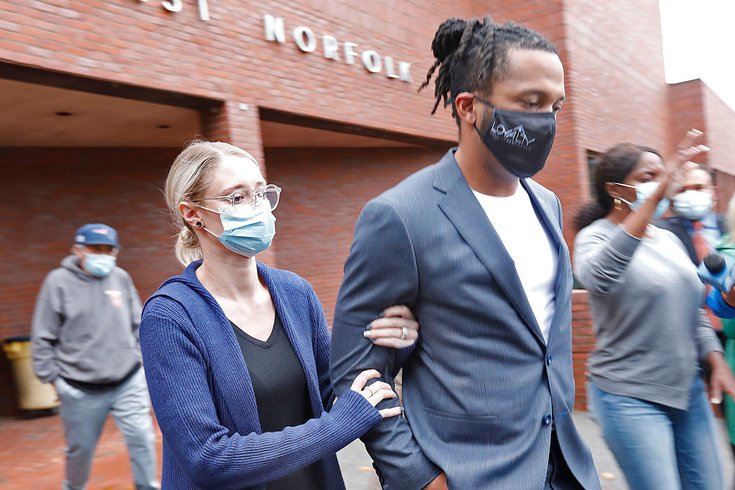 Former Philadelphia Eagles safety Patrick Chung and his fiancee leave Quincy District Court in Massachusetts on Tuesday. Chung pleaded not guilty to charges of assault and battery against a family member.

Former Philadelphia Eagles safety Patrick Chung was charged this week in an alleged domestic incident in Massachusetts, where he spent most of his NFL career with the New England Patriots.

Chung, 34, pleaded not guilty Tuesday to charges of assault and battery and vandalism, according to The Boston Globe. He was released without a cash bail.

Chung is accused of assaulting a family member Monday in Milton, about 10 miles south of Boston.

The mother of one of Chung's children reportedly obtained a civil restraining order against him in Quincy District Court on Tuesday, but additional details about the alleged incident were not immediately available.

Prior to Monday's incident, Chung had tweeted that he was having the best day of his life.

Best day of my life

In August 2019, Chung was charged with possessing a small amount of cocaine after police responded to a home he owned in New Hampshire. Prosecutors had agreed to drop the charge as long as Chung avoided legal trouble for two years, submitted to regular drug tests and completed community service.

Chung spent 11 seasons in the NFL before retiring in March, all but one of them with the Patriots. His lone season with the Eagles came in 2013 under former head coach Chip Kelly, who had been Chung's coach at the University of Oregon. Chung opted out of the 2020 NFL season during the coronavirus pandemic and had co-founded a commercial real estate company in Massachusetts.

As a member of the Patriots, Chung was a key piece of three Super Bowl teams. He also was on the Patriots team that lost to the Eagles in Super Bowl LII.